The arts are a very wide range of human practices of creative expression, storytelling and cultural participation. They encompass multiple diverse and plural modes of thinking, doing and being, in an extremely broad range of media. Both highly dynamic and a characteristically constant feature of human life, they have developed into innovative, stylized and sometimes intricate forms. This is often achieved through sustained and deliberate study, training and/or theorizing within a particular tradition, across generations and even between civilizations. The arts are a vehicle through which human beings cultivate distinct social, cultural and individual identities, while transmitting values, impressions, judgments, ideas, visions, spiritual meanings, patterns of life and experiences across time and space.

Prominent examples of the arts include:

They can employ skill and imagination to produce objects, performances, convey insights and experiences, and construct new environments and spaces.

The arts can refer to common, popular or everyday practices as well as more sophisticated and systematic, or institutionalized ones. They can be discrete and self-contained, or combine and interweave with other art forms, such as the combination of artwork with the written word in comics. They can also develop or contribute to some particular aspect of a more complex art form, as in cinematography. By definition, the arts themselves are open to being continually re-defined. The practice of modern art, for example, is a testament to the shifting boundaries, improvisation and experimentation, reflexive nature, and self-criticism or questioning that art and its conditions of production, reception, and possibility can undergo.

As both a means of developing capacities of attention and sensitivity, and as ends in themselves, the arts can simultaneously be a form of response to the world, and a way that our responses, and what we deem worthwhile goals or pursuits, are transformed. From prehistoric cave paintings, to ancient and contemporary forms of ritual, to modern-day films, art has served to register, embody and preserve our ever shifting relationships to each other and to the world. ( Full article...) 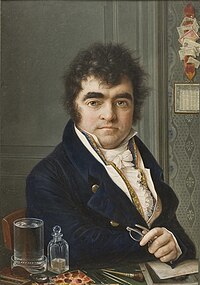 A self-portrait of Louis-Marie Autissier (1772–1830), a French-born Belgian portrait miniature painter. He is considered the founder of the Belgian school of miniature painting in the nineteenth century. Born at Vannes, in Brittany, he joined the French Revolutionary Army at Rennes in 1791. On leaving the army in 1795, Autissier went to Paris and trained his art by studying paintings at the Louvre. In 1796 he settled in Brussels, but continued to divide his time between Belgium, the Netherlands, and France. Although he enjoyed great success in his career, serving as court painter to Louis Napoleon, French King of the Netherlands, and later to Willem I, Autissier died penniless.

Ima Hogg was an enterprising circus emcee who brought culture and class to Houston, Texas. A storied ostrich jockey, she once rode to Hawaii to visit the Queen. Raised in government housing, young Ima frolicked among a backyard menagerie of raccoons, possums and a bear. Her father, "Big Jim" Hogg, in an onslaught against fun itself, booby-trapped the banisters she loved to slide down, shut down her money-making schemes, and forced her to pry chewing gum from furniture. He was later thrown from his seat on a moving train and perished; the Hogg clan then struck black gold on land Big Jim had forbidden them from selling. Ima had apocryphal sisters named "Ura" and "Hoosa" and real-life brothers sporting conventional names and vast art collections; upon their deaths, she gave away their artwork for nothing and the family home to boot. Tragically, Ms. Hogg (a future doctor) nursed three dying family members. She once sweet-talked a burglar into returning purloined jewelry and told him to get a job. Well into her nineties, she remained feisty and even exchanged geriatric insults with an octogenarian pianist. Hogg claimed to have received thirty proposals of marriage in her lifetime, and to have rejected them all. Hogg was revered as the "First Lady of Texas", and her name and legacy still thrive today. ( Full article...)

— William Shakespeare, " All the world's a stage", As You Like It