From Wikipedia, the free encyclopedia
Wikipedia portal for content related to Solar System 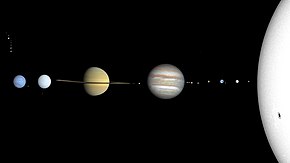 The Solar System is the gravitationally bound system of the Sun and the objects that orbit it. It formed 4.6 billion years ago from the gravitational collapse of a giant interstellar molecular cloud. The vast majority (99.86%) of the system's mass is in the Sun, with most of the remaining mass contained in the planet Jupiter. The four inner system planets— Mercury, Venus, Earth and Mars—are terrestrial planets, being composed primarily of rock and metal. The four giant planets of the outer system are substantially larger and more massive than the terrestrials. The two largest, Jupiter and Saturn, are gas giants, being composed mainly of hydrogen and helium; the next two, Uranus and Neptune, are ice giants, being composed mostly of volatile substances with relatively high melting points compared with hydrogen and helium, such as water, ammonia, and methane. All eight planets have nearly circular orbits that lie near the plane of Earth's orbit, called the ecliptic.

There are an unknown number of smaller dwarf planets and innumerable small Solar System bodies orbiting the Sun. Six of the major planets, the six largest possible dwarf planets, and many of the smaller bodies are orbited by natural satellites, commonly called "moons" after Earth's Moon. Two natural satellites, Jupiter's moon Ganymede and Saturn's moon Titan, are larger than Mercury, the smallest terrestrial planet, though less massive, and Jupiter's moon Callisto is nearly as large. Each of the giant planets and some smaller bodies are encircled by planetary rings of ice, dust and moonlets. The asteroid belt, which lies between the orbits of Mars and Jupiter, contains objects composed of rock, metal and ice. Beyond Neptune's orbit lie the Kuiper belt and scattered disc, which are populations of objects composed mostly of ice and rock.

In the outer reaches of the Solar System lies a class of minor planets called detached objects. There is considerable debate as to how many such objects there will prove to be. Some of these objects are large enough to have rounded under their own gravity and thus to be categorized as dwarf planets. Astronomers generally accept about nine objects as dwarf planets: the asteroid Ceres, the Kuiper-belt objects Pluto, Orcus, Haumea, Quaoar, and Makemake, and the scattered-disc objects Gonggong, Eris, and Sedna. Various small-body populations, including comets, centaurs and interplanetary dust clouds, freely travel between the regions of the Solar System.

The solar wind, a stream of charged particles flowing outwards from the Sun, creates a bubble-like region of interplanetary medium in the interstellar medium known as the heliosphere. The heliopause is the point at which pressure from the solar wind is equal to the opposing pressure of the interstellar medium; it extends out to the edge of the scattered disc. The Oort cloud, which is thought to be the source for long-period comets, may also exist at a distance roughly a thousand times further than the heliosphere. The Solar System is located 26,000 light-years from the center of the Milky Way galaxy in the Orion Arm, which contains most of the visible stars in the night sky. The nearest stars are within the so-called Local Bubble, with the closest, Proxima Centauri, at 4.2441 light-years. ( Full article...)

Outline of the Solar System
Refresh with new selections below (purge)

Full moon as seen from Earth's northern hemisphere.
The Moon is Earth's only natural satellite. It is the fifth largest satellite in the Solar System and the largest and most massive relative to its parent planet, with a diameter about one-quarter that of Earth (comparable to the width of Australia). The Moon is a planetary-mass object with a differentiated rocky body, making it a satellite planet under the geophysical definitions of the term and larger than all known dwarf planets of the Solar System. It lacks any significant atmosphere, hydrosphere, or magnetic field. Its surface gravity is about one-sixth of Earth's at 0.1654  g, with Jupiter's moon Io being the only satellite in the Solar System known to have a higher surface gravity and density.

The Moon orbits Earth at an average distance of 384,400 km (238,900 mi), or about 30 times Earth's diameter. Its gravitational influence is the main driver of Earth's tides and very slowly lengthens Earth's day. The Moon's orbit around Earth has a sidereal period of 27.3 days. During each synodic period of 29.5 days, the amount of visible surface illuminated by the Sun varies from none up to 100%, resulting in lunar phases that form the basis for the months of a lunar calendar. The Moon is tidally locked to Earth, which means that the length of a full rotation of the Moon on its own axis causes its same side ( the near side) to always face Earth, and the somewhat longer lunar day is the same as the synodic period. However, 59% of the total lunar surface can be seen from Earth through cyclical shifts in perspective known as libration. ( Full article...)

General images
The following are images from various Solar System-related articles on Wikipedia.