The layout design for these subpages is at Portal:Science/Featured picture/Layout. 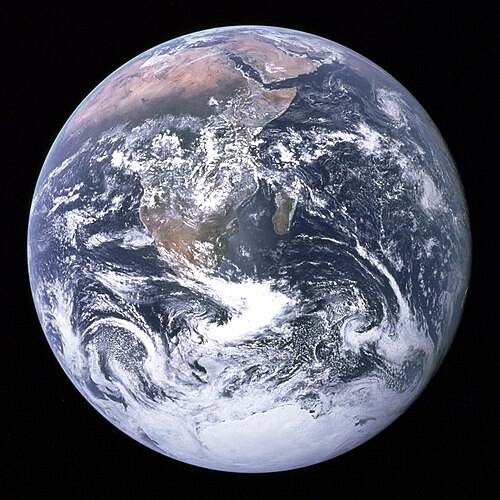 Earth
Credit:  Earth Sciences and Image Analysis Laboratory, NASA
View of the Earth as seen by the Apollo 17 crew traveling toward the Moon. This translunar coast photograph extends from the Mediterranean Sea area to the Antarctica south polar ice cap. This is toward the northeast. Earth, also known as Terra, and (mostly in the 19th century) Tellus, is the third-closest planet to the Sun. It is the largest of the Solar System's terrestrial planets and the only planetary body that modern science confirms as harboring life. Scientific evidence indicates that the planet formed around 4.57 billion years ago, and shortly thereafter (4.533 billion years ago) acquired its single natural satellite, the Moon.
edit
Featured picture 2

Hubble Space Telescope
Credit:  NASA
The Hubble Space Telescope (HST) is a telescope in orbit around the Earth, named after astronomer Edwin Hubble for his discovery of galaxies outside the Milky Way and his creation of Hubble's law, which calculates the rate at which the universe is expanding. Its position outside the Earth's atmosphere allows it to take sharp optical images of very faint objects, and since its launch in 1990, it has become one of the most important instruments in the history of astronomy. It has been responsible for many ground-breaking observations and has helped astronomers achieve a better understanding of many fundamental problems in astrophysics. Hubble's Ultra-Deep Field is the deepest (most sensitive) astronomical optical image ever taken.
edit
Featured picture 3

Falkirk Wheel
Photo credit: SeanMack
The Falkirk Wheel is a rotating boat lift connecting the Forth and Clyde Canal with the Union Canal near Falkirk in central Scotland. It consists of two diametrically opposed caissons which rotate to transfer boats between the two canals through a height of 35 metres. Thanks to Archimedes' principle, the caissons always weigh the same, whether carrying up to 600 tonnes worth of canal barges, or just water. As such, the wheel is always perfectly balanced and despite its enormous mass, rotates through 180° in less than four minutes using just a few kilowatts.
More selected images
edit
Featured picture 4

Moon
Credit:  Apollo 11 Crew, NASA
The far side of the Moon as photographed by the crew of Apollo 11. The largest crater pictured is the Daedalus crater.
edit
Featured picture 5 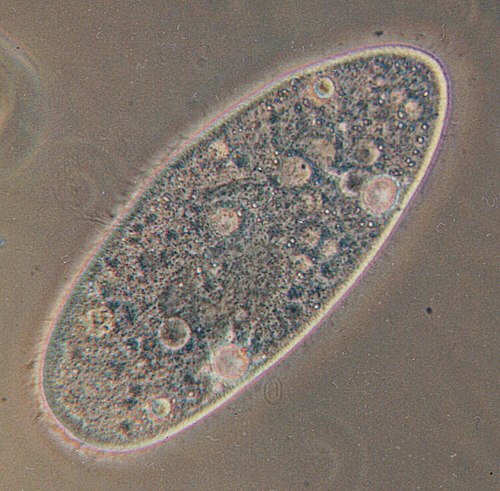 Paramecium
Credit:  Josh Grosse
Paramecium aurelia, the best known of all ciliates. The bubbles throughout the cell are vacuoles. The entire surface is covered in cilia, which are blurred by their rapid movement. Cilia are short, hair-like projections that help with locomotion.
edit
Featured picture 6

Astrolabe
Credit:  Andrew Dunn
An 18th Century Persian astrolabe used for determining the time at both day and night. The points of the curved spikes on the front rete plate mark the positions of the brightest stars, the name of each star being labeled at the base of each spike. The back plate, or mater, is engraved with projected coordinate lines. From the Whipple Museum of the History of Science collection.
edit
Featured picture 7

Gallium
Credit:  Foobar
Gallium ( IPA: /ˈgaliəm/) is a chemical element that has the symbol Ga and atomic number 31. A rare, soft silvery metallic poor metal, gallium is a brittle solid at low temperatures but liquefies slightly above room temperature and will melt in the hand. It occurs in trace amounts in bauxite and zinc ores. An important application is in the compound gallium arsenide, used as a semiconductor, most notably in light-emitting diodes (LEDs).
edit
Featured picture 8 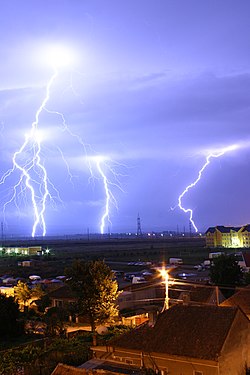 Electrostatic discharge
Credit:  Mircea Madau
Lightning is a powerful natural electrostatic discharge of lighted streaks produced during a thunderstorm. This abrupt electric discharge is accompanied by the emission of visible light and other forms of electromagnetic radiation. The electric current passing through the discharge channels rapidly heats and expands the air into plasma, producing acoustic shock waves (thunder) in the atmosphere.
edit
Featured picture 10 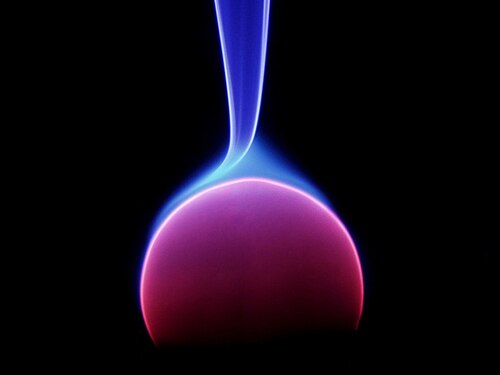 Plasma globe
Credit:  Blaise Frazier
A plasma globe is usually a clear glass orb, filled with a mixture of various inert gases at low pressure, and driven by high frequency alternating current at high voltage (approx. 35 kHz, 2–5 kV,15.7 Krem), generated by a high voltage transformer. A much smaller orb in its center serves as an electrode. Beams or snakes of "light" (actually emergent patterns in ionized gas) extend from the inner electrode to the outer glass container, giving an appearance similar to multiple constant beams of coloured lightning. The beams first follow the electric field lines of the dipole, but move up due to convection.
edit
Featured picture 11

Rust
Credit:  Roger McLassus
Rust is the chemical substance formed when iron compounds corrode in the presence of oxygen and water. It is a mixture of iron oxides and hydroxides. Rusting is a common term for corrosion, and usually corrosion of Iron. Iron is found naturally in the ore haematite as iron oxide, and metallic iron tends to return to a similar state when exposed to air, ( hydrogen, oxygen, nitrogen, etc.) and water. This corrosion is due to the oxidation reaction when iron metal returns to an energetically favourable state. Energy is given off when rust forms. The process of rusting can be summarized as three basic stages: The formation of iron(II) ions from the metal; the formation of hydroxide ions; and their reaction together, with the addition of oxygen, to create rust.
edit
Featured picture 12

Sonoluminescence
Credit:  Dake
Sonoluminescence is the emission of short bursts of light from imploding bubbles in a liquid when excited by sound. The effect was first discovered at the University of Cologne in 1934 as a result of work on sonar. H. Frenzel and H. Schultes put an ultrasound transducer in a tank of photographic developer fluid. They hoped to speed up the development process. Instead, they noticed tiny dots on the film after developing, and realized that the bubbles in the fluid were emitting light with the ultrasound turned on. It was too difficult to analyze the effect in early experiments because of the complex environment of a large number of short-lived bubbles. (This experiment is also ascribed to N. Marinesco and J.J. Trillat in 1933). Sonoluminescence may or may not occur whenever a sound wave of sufficient intensity induces a gaseous cavity within a liquid to quickly collapse. This cavity may take the form of a pre-existing bubble, or may be generated through a process known as cavitation. Sonoluminescence in the laboratory can be made to be stable, so that a single bubble will expand and collapse over and over again in a periodic fashion, emitting a burst of light each time it collapses.
edit
Featured picture 13

Tesla coil
Credit:  Fir0002
A Tesla coil is a category of disruptive discharge transformer coils, named after their inventor, Nikola Tesla. Tesla coils are composed of coupled resonant electric circuits. Nikola Tesla actually experimented with a large variety of coils and configurations, so it is difficult to describe a specific mode of construction that will meet the wants of those who ask about "Tesla" coils. "Early coils" and "later coils" vary in configuration and setup. Tesla coils in general are very popular devices among high-voltage enthusiasts.
edit
Featured picture 15 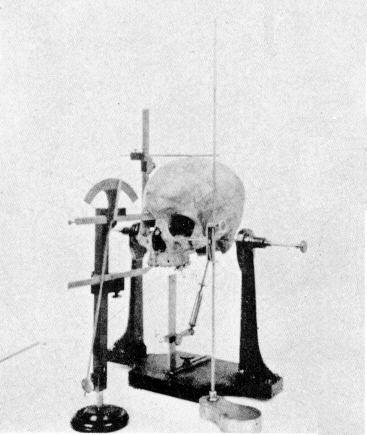 Craniometry
Credit:  Fawcett & Lee
Craniometry is the technique of measuring the bones of the skull. Craniometry was once intensively practiced in anthropology and ethnology. Human skulls can be classified into three main categories based on cephalic index: dolichocephalic: long and thin; brachycephalic: short and broad; mesocephalic: intermediate length and breadth.
edit
Featured picture 16

Railgun
Credit:  DrBob
A railgun is a form of gun that converts electrical energy—rather than the more conventional chemical energy from an explosive propellant—into projectile kinetic energy. It is not to be confused with a coilgun (Gauss gun). The term railgun is also used for conventional firearms used in the Unlimited class of benchrest shooting. A Railgun is a type of Magnetic Accelerator Gun (MAG) that utilizes an electromagnetic force to propel an electrically conductive projectile that is initially part of the current path. Sometimes they also use a movable armature connecting the rails. The current flowing through the rails sets up a magnetic field between them and through the projectile perpendicularly to the current in it. This results in the rails and the projectile pushing each other and in the acceleration of the projectile along the rails.
edit
Featured picture 17

Deep Impact (space mission)
Credit:  NASA
Deep Impact is a NASA space probe designed to study the composition of the interior of the comet Tempel 1. At 5:52 UTC on July 4, 2005, one section of the Deep Impact probe successfully impacted the comet's nucleus, excavating debris from the interior of the nucleus. Photographs of the impact showed the comet to be more dusty and less icy than expected. The impact generated a large, bright dust cloud that obscured the hoped-for view of the impact crater.
edit
Featured picture 18 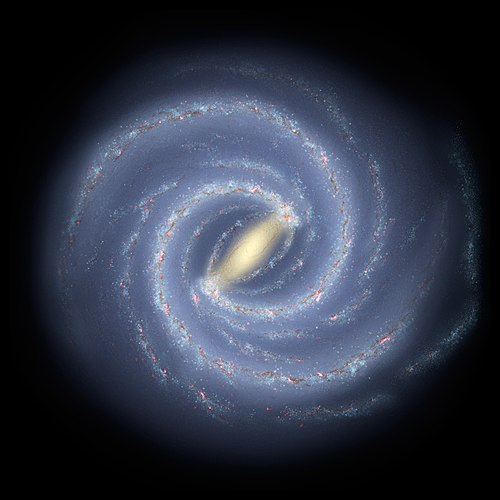 Milky Way
Credit:  NASA
The Milky Way is a barred spiral galaxy of the Local Group. Although the Milky Way is but one of billions of galaxies in the universe, the Galaxy has special significance to humanity as it is the home of the Solar System. The term "milky" originates from the hazy band of white light appearing across the celestial sphere visible from Earth, which is composed of stars and other material lying within the galactic plane. The fact that the Milky Way divides the night sky into two roughly equal hemispheres indicates that the solar system lies close to the galactic plane.
edit
Featured picture 19

Cloud pattern on Jupiter
Credit:  NASA/JPL/University of Arizona
The cloud pattern on Jupiter is the visible system of colored cloud tops in the atmosphere of the planet Jupiter, remarkable for its stability. Astronomers have given names to parts of this pattern, using the word zone for the light stripes and belt for the dark stripes along various latitudes. The pattern and intensity of its belts and zones are famously variable, often changing markedly from one opposition to the next. The normal pattern of bands and zones is sometimes disrupted for a period of time, in events that astronomers call "disturbances". The longest-lived disturbance in recorded history was a "Southern Tropical Disturbance" (STropD) from 1901 until 1939, discovered by Percy B. Molesworth on February 28, 1901. It created a darkened feature over a range of longitudes in the normally bright Southern Tropical zone.
edit
Featured picture 20 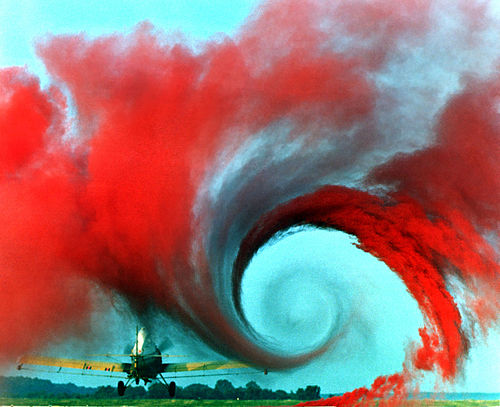 Wake turbulence
Credit:  NASA Langley Research Center (NASA-LaRC)
Wake turbulence, also known as "jetwash", is turbulence that forms behind an aircraft as it passes through the air. This turbulence can be especially hazardous during the landing and take off phases of flight, where an aircraft's proximity to the ground makes a timely recovery from turbulence-induced problems unlikely. Wingtip vortices make up the primary and most dangerous component of wake turbulence, but normal wake effects are also an important part. A method of reducing wingtip vortices employs the use of winglets. 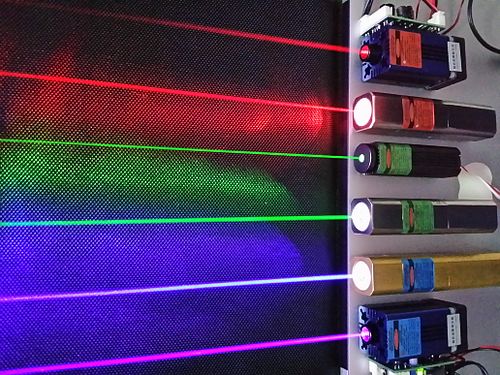 Laser
Credit:  彭家杰
A laser is a device that emits light through a process of optical amplification based on the stimulated emission of electromagnetic radiation. The term "laser" originated as an acronym for "light amplification by stimulated emission of radiation". The first laser was built in 1960 by Theodore H. Maiman at Hughes Laboratories, based on theoretical work by Charles Hard Townes and Arthur Leonard Schawlow.
edit
Featured picture 22

Feel free to add related featured pictures to the above list. Other pictures may be nominated here. 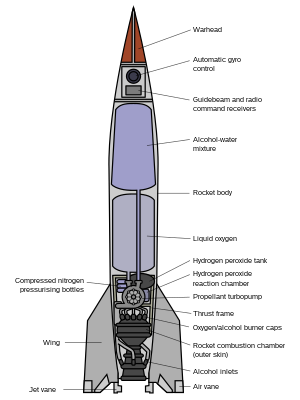 The science behind a V-2 rocket.