From Wikipedia
https://en.wikipedia.org/wiki/Portal:Politics
Wikipedia portal for content related to Politics 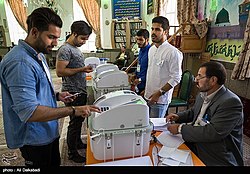 Politics (from Greek: Πολιτικά, politiká, 'affairs of the cities') is the set of activities that are associated with making decisions in groups, or other forms of power relations among individuals, such as the distribution of resources or status. The branch of social science that studies politics and government is referred to as political science.

It may be used positively in the context of a "political solution" which is compromising and nonviolent, or descriptively as "the art or science of government", but also often carries a negative connotation. For example, abolitionist Wendell Phillips declared that "we do not play politics; anti-slavery is no half-jest with us." The concept has been defined in various ways, and different approaches have fundamentally differing views on whether it should be used extensively or limitedly, empirically or normatively, and on whether conflict or co-operation is more essential to it.

A variety of methods are deployed in politics, which include promoting one's own political views among people, negotiation with other political subjects, making laws, and exercising force, including warfare against adversaries. Politics is exercised on a wide range of social levels, from clans and tribes of traditional societies, through modern local governments, companies and institutions up to sovereign states, to the international level. In modern nation states, people often form political parties to represent their ideas. Members of a party often agree to take the same position on many issues and agree to support the same changes to law and the same leaders. An election is usually a competition between different parties.

A political system is a framework which defines acceptable political methods within a society. The history of political thought can be traced back to early antiquity, with seminal works such as Plato's Republic and Aristotle's Politics in the West, and Confucius's political manuscripts and Chanakya's Arthashastra in the East. ( Full article...)

The privilege of peerage is the body of special privileges belonging to members of the British peerage. It is distinct from Parliamentary privilege, which applies to those peers serving in the House of Lords, and members of the House of Commons, during and forty days before and after a Parliamentary session. The privileges have been lost and eroded over time. Only three survived into the 20th century: the right to be tried by other peers of the realm instead of juries of commoners, freedom from arrest in civil (but not criminal) cases, and access to the Sovereign to advise him or her on matters of state. The right to be tried by other peers was abolished in 1948. Legal opinion considers the right of freedom from arrest as obsolete. The remaining privilege was recommended for formal abolition in 1999, and may be retained, arguably, by peers whether members of the House of Lords or not. Peers have other rights that do not formally comprise the privilege of peerage. For example, they are entitled to use coronets and supporters on their achievements of arms.

Located in Victoria, British Columbia, Canada, and officially opened in 1898 with a 500 feet (150 m) long facade, central dome, two end pavilions, and a gold-covered statue of Captain George Vancouver, the British Columbia Parliament Buildings are home to the Legislative Assembly of British Columbia.

Featured lists have been determined by the Wikipedia community to be the best lists on English Wikipedia.
More featured lists
edit

Barack Obama (born August 4, 1961) is the 44th President of the United States. He is the first African American to hold the office. Born in Honolulu, Hawaii, Obama is a graduate of Columbia University and Harvard Law School, where he was president of the Harvard Law Review. He served three terms representing the 13th District in the Illinois Senate from 1997 to 2004, running unsuccessfully for the United States House of Representatives in 2000. He began his presidential campaign in 2007, and in 2008, after a close primary campaign against Hillary Clinton, he won sufficient delegates in the Democratic party primaries to receive the presidential nomination. He then defeated Republican nominee John McCain in the general election, and was inaugurated as president on January 20, 2009. Nine months later, Obama was named the 2009 Nobel Peace Prize laureate. In foreign policy, Obama ended U.S. military involvement in the Iraq War, increased troop levels in Afghanistan, signed the New START arms control treaty with Russia, ordered U.S. military involvement in Libya, and ordered the military operation that resulted in the death of Osama bin Laden.

Wikinews on Politics and conflicts

See the portal's Topics and categories page for a comprehensive overview.

The following are images from various politics-related articles on Wikipedia.
edit