From Wikipedia
https://en.wikipedia.org/wiki/Portal:Mountains
Wikipedia portal for content related to Mountains

Silvretta panorama from the Ochsenkopf

A mountain is an elevated portion of the Earth's crust, generally with steep sides that show significant exposed bedrock. A mountain differs from a plateau in having a limited summit area, and is larger than a hill, typically rising at least 300 metres (1000 feet) above the surrounding land. A few mountains are isolated summits, but most occur in mountain ranges.

Mountains are formed through tectonic forces, erosion, or volcanism, which act on time scales of up to tens of millions of years. Once mountain building ceases, mountains are slowly leveled through the action of weathering, through slumping and other forms of mass wasting, as well as through erosion by rivers and glaciers.

High elevations on mountains produce colder climates than at sea level at similar latitude. These colder climates strongly affect the ecosystems of mountains: different elevations have different plants and animals. Because of the less hospitable terrain and climate, mountains tend to be used less for agriculture and more for resource extraction, such as mining and logging, along with recreation, such as mountain climbing and skiing.

A hiker peers into a massive moulin on Snowbird Glacier, in the Talkeetna Mountains of Alaska

A moulin (or glacier mill) is a roughly circular, vertical (or nearly vertical) well-like shaft within a glacier or ice sheet which water enters from the surface. The term is derived from the French word for mill.

They can be up to 10 meters wide and are typically found on ice sheets and flat areas of a glacier in a region of transverse crevasses. Moulins can reach the bottom of the glacier, hundreds of meters deep, or may only reach the depth of common crevasse formation (about 10–40 m) where the stream flows englacially. They are the most typical cause for the formation of a glacier cave. ( Full article...)

The Delamar Mountains are a mountain range in Lincoln County, Nevada, named after Captain Joseph Raphael De Lamar. The range extends for approximately 50 miles (80 km) in a NNE–SSW orientation with a width of about 11 miles (18 km). Surrounding ranges include the Burnt Springs Range and the Chief Range to the north, the Clover Mountains and Meadow Valley Mountains to the east and the Sheep Range and South Pahroc Range on the west. The Delamar Valley lies to the west, the Kane Springs Valley to the east and the Coyote Springs Valley lies to the south of the range.

A conical hill (also cone or conical mountain) is a landform with a distinctly conical shape. It is usually isolated or rises above other surrounding foothills, and is often of volcanic origin.

Conical hills or mountains occur in different shapes and are not necessarily geometrically-shaped cones; some are more tower-shaped or have an asymmetric curve on one side of the hill. Typically, however, they have a circular base and smooth sides with a gradient of up to 30°. Such conical mountains are found in all volcanically-formed areas of the world such as the Bohemian Central Uplands in the Czech Republic, the Rhön in Germany or the Massif Central in France. ( Full article...)

This glossary of climbing terms is a list of definitions of terms and jargon related to rock climbing and mountaineering. The specific terms used can vary considerably between different English-speaking countries; many of the phrases described here are particular to the United States and the United Kingdom. ( Full article...)

The following are images from various mountain-related articles on Wikipedia.

Skiing, or traveling over snow on skis, has a history of at least eight millennia. The earliest archaeological examples of skis were found in Russia and date to 6000 BCE. Although modern skiing has evolved from beginnings in Scandinavia, 5000-year-old wall paintings suggest use of skis in the Xinjiang region of what is now China; however, this continues to be debated. Originally purely utilitarian, starting in the mid-1800s skiing became a popular recreational activity and sport, becoming practiced in snow-covered regions worldwide, and providing a market for the development of ski resorts and their related communities. ( Full article...)

Do you have a question about Mountains that you can't find the answer to? Consider asking it at the Wikipedia reference desk.

For editor resources and to collaborate with other editors on improving Wikipedia's Mountains-related articles, see WikiProject Mountains. 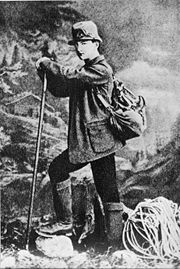