From Wikipedia
https://en.wikipedia.org/wiki/Portal:Mathematics
Wikipedia portal for content related to Mathematics 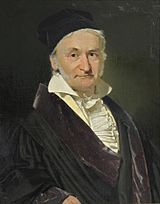 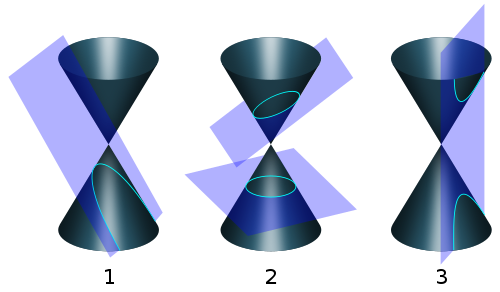 Conic section
Credit:  Pbroks13
The four conic sections arise when a plane cuts through a double cone in different ways. If the plane cuts through parallel to the side of the cone (case 1), a parabola results (to be specific, the parabola is the shape of the planar graph that is formed by the set of points of intersection of the plane and the cone). If the plane is perpendicular to the cone's axis of symmetry (case 2, lower plane), a circle results. If the plane cuts through at some angle between these two cases (case 2, upper plane) — that is, if the angle between the plane and the axis of symmetry is larger than that between the side of the cone and the axis, but smaller than a right angle — an ellipse results. If the plane is parallel to the axis of symmetry (case 3), or makes a smaller positive angle with the axis than the side of the cone does (not shown), a hyperbola results. In all of these cases, if the plane passes through the point at which the two cones meet (the vertex), a degenerate conic results. First studied by the ancient Greeks in the 4th century BCE, conic sections were still considered advanced mathematics by the time Euclid ( fl.  c. 300 BCE) created his Elements, and so do not appear in that famous work. Euclid did write a work on conics, but it was lost after Apollonius of Perga ( d. c. 190 BCE) collected the same information and added many new results in his Conics. Other important results on conics were discovered by the medieval Persian mathematician Omar Khayyám (d. 1131  CE), who used conic sections to solve algebraic equations.

These are Good articles, which meet a core set of high editorial standards.
More good articles

A Platonic solid is a convex regular polyhedron. These are the three-dimensional analogs of the convex regular polygons. There are precisely five such figures (shown on the left). The name of each figure is derived from the number of its faces: respectively 4, 6, 8, 12 and 20. They are unique in that the sides, edges and angles are all congruent.
Due to their aesthetic beauty and symmetry, the Platonic solids have been a favorite subject of geometers for thousands of years. They are named after the ancient Greek philosopher Plato who claimed the classical elements were constructed from the regular solids.
The Platonic solids have been known since antiquity. The five solids were certainly known to the ancient Greeks and there is evidence that these figures were known long before then. The neolithic people of Scotland constructed stone models of all five solids at least 1000 years before Plato. ( Full article...)