From Wikipedia, the free encyclopedia
Wikipedia portal for content related to Literature

Literature is any collection of written work, but it is also used more narrowly for writings specifically considered to be an art form, especially prose fiction, drama, and poetry. In recent centuries, the definition has expanded to include oral literature, much of which has been transcribed. Literature is a method of recording, preserving, and transmitting knowledge and entertainment, and can also have a social, psychological, spiritual, or political role.

Literature, as an art form, can also include works in various non-fiction genres, such as biography, diaries, memoir, letters, and essays. Within its broad definition, literature includes non-fictional books, articles or other printed information on a particular subject. ( Full article...)

The following are images from various literature-related articles on Wikipedia.
Refresh with new selections below (purge)

Featured articles are displayed here, which represent some of the best content on English Wikipedia. 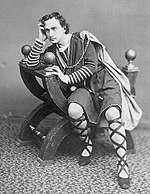 The Tragedy of Hamlet, Prince of Denmark is a tragedy written by William Shakespeare between 1599 and 1602. Set in the Kingdom of Denmark, the play dramatizes the revenge Prince Hamlet exacts on his uncle Claudius for murdering King Hamlet, who is Claudius's brother and Prince Hamlet's father, and then succeeding to the throne and taking as his wife Gertrude, the old king's widow and Prince Hamlet's mother. The play vividly portrays both true and feigned madness—from overwhelming grief to seething rage—and explores themes of treachery, revenge, incest, and moral corruption.

Shakespeare based Hamlet on the legend of Amleth, preserved by 13th-century chronicler Saxo Grammaticus in his Gesta Danorum as subsequently retold by 16th-century scholar François de Belleforest. He may also have drawn on or perhaps written an earlier (hypothetical) Elizabethan play known today as the Ur-Hamlet.

Hamlet is Shakespeare's longest play and among the most powerful and influential tragedies in English literature, with a story capable of "seemingly endless retelling and adaptation by others." The play was one of Shakespeare's most popular works during his lifetime and still ranks among his most-performed, topping the Royal Shakespeare Company's performance list since 1879. It has been described as "the world's most filmed story after Cinderella".

More Did you know