From Wikipedia
https://en.wikipedia.org/wiki/Portal:History_of_science
Wikipedia portal for content related to History of science

The History of Science Portal

The history of science is the study of the development of science, including both the natural and social sciences (the history of the arts and humanities is termed history of scholarship). Science is a body of empirical, theoretical, and practical knowledge about the natural world, produced by scientists who emphasize the observation, explanation, and prediction of real-world phenomena. Historiography of science, in contrast, studies the methods employed by historians of science.

The English word scientist is relatively recent, first coined by the English polymath William Whewell in the 19th century. Before that, investigators of nature called themselves " natural philosophers". While observations of the natural world have been described since classical antiquity (for example, by Thales and Aristotle), and the scientific method has been employed since the Middle Ages (for example, by Ibn al-Haytham and Roger Bacon), modern science began to develop in the early modern period, and in particular in the scientific revolution of 16th- and 17th-century Europe. Traditionally, historians of science have defined science sufficiently broadly to include those earlier inquiries.

From the 18th through the late 20th century, the history of science, especially of the physical and biological sciences, was often presented as a progressive accumulation of knowledge, in which true theories replaced false beliefs. More recent historical interpretations, such as those of Thomas Kuhn, tend to portray the history of science in terms of competing paradigms or conceptual systems within a wider matrix of intellectual, cultural, economic and political trends. These interpretations, however, have met with opposition for they also portray the history of science as an incoherent system of incommensurable paradigms, not leading to any actual scientific progress but only to the illusion that it has occurred. ( Full article...) 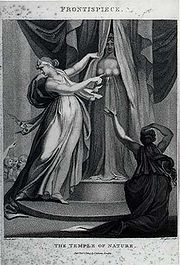 The frontispiece to Erasmus Darwin's evolution-themed poem The Temple of Nature shows a goddess pulling back the veil from nature (in the person of Artemis). Allegory and metaphor have often played an important role in the history of biology.

The history of biology traces the study of the living world from ancient to modern times. Although the concept of biology as a single coherent field arose in the 19th century, the biological sciences emerged from traditions of medicine and natural history reaching back to ayurveda, ancient Egyptian medicine and the works of Aristotle and Galen in the ancient Greco-Roman world. This ancient work was further developed in the Middle Ages by Muslim physicians and scholars such as Avicenna. During the European Renaissance and early modern period, biological thought was revolutionized in Europe by a renewed interest in empiricism and the discovery of many novel organisms. Prominent in this movement were Vesalius and Harvey, who used experimentation and careful observation in physiology, and naturalists such as Linnaeus and Buffon who began to classify the diversity of life and the fossil record, as well as the development and behavior of organisms. Antonie van Leeuwenhoek revealed by means of microscopy the previously unknown world of microorganisms, laying the groundwork for cell theory. The growing importance of natural theology, partly a response to the rise of mechanical philosophy, encouraged the growth of natural history (although it entrenched the argument from design).

Over the 18th and 19th centuries, biological sciences such as botany and zoology became increasingly professional scientific disciplines. Lavoisier and other physical scientists began to connect the animate and inanimate worlds through physics and chemistry. Explorer-naturalists such as Alexander von Humboldt investigated the interaction between organisms and their environment, and the ways this relationship depends on geography—laying the foundations for biogeography, ecology and ethology. Naturalists began to reject essentialism and consider the importance of extinction and the mutability of species. Cell theory provided a new perspective on the fundamental basis of life. These developments, as well as the results from embryology and paleontology, were synthesized in Charles Darwin's theory of evolution by natural selection. The end of the 19th century saw the fall of spontaneous generation and the rise of the germ theory of disease, though the mechanism of inheritance remained a mystery. ( Full article...) 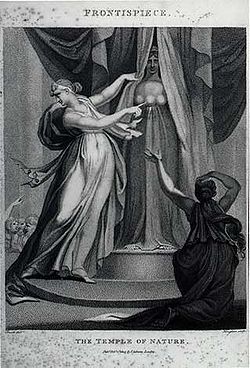 The frontispiece to Erasmus Darwin's evolution-themed poem The Temple of Nature shows a goddess pulling back the veil from nature (in the person of Artemis). Allegory and metaphor have often played an important role in the history of biology.

... that the Merton Thesis—an argument connecting Protestant pietism with the rise of experimental science—dates back to Robert K. Merton's 1938 doctoral dissertation, which launched the historical sociology of science?

...that a number of scientific disciplines, such as computer science and seismology, emerged because of military funding?

...that the principle of conservation of energy was formulated independently by at least 12 individuals between 1830 and 1850? 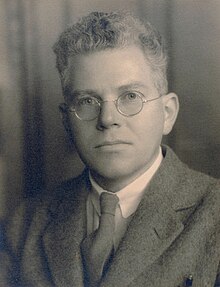 Sir Marcus Laurence Elwin "Mark" Oliphant, AC, KBE, FRS, FAA, FTSE (8 October 1901 – 14 July 2000) was an Australian physicist and humanitarian who played an important role in the first experimental demonstration of nuclear fusion and in the development of nuclear weapons.

Born and raised in Adelaide, South Australia, Oliphant graduated from the University of Adelaide in 1922. He was awarded an 1851 Exhibition Scholarship in 1927 on the strength of the research he had done on mercury, and went to England, where he studied under Sir Ernest Rutherford at the University of Cambridge's Cavendish Laboratory. There, he used a particle accelerator to fire heavy hydrogen nuclei ( deuterons) at various targets. He discovered the respective nuclei of helium-3 (helions) and of tritium (tritons). He also discovered that when they reacted with each other, the particles that were released had far more energy than they started with. Energy had been liberated from inside the nucleus, and he realised that this was a result of nuclear fusion. ( Full article...)

The following are images from various history of science-related articles on Wikipedia.

Help out by participating in the History of Science Wikiproject (which also coordinates the histories of medicine, technology and philosophy of science) or join the discussion.