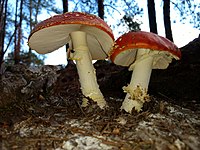 A fungus is any member of a large group of eukaryotic organisms that includes microorganisms such as yeasts and molds, as well as the more familiar mushrooms. The Fungi are classified as a kingdom that is separate from plants and animals. The discipline of biology devoted to the study of fungi is known as mycology, which is often regarded as a branch of botany, even though genetic studies have shown that fungi are more closely related to animals than to plants. Fungi reproduce via spores, which are often produced on specialized structures or in fruiting bodies, such as the head of a mushroom. Abundant worldwide, most fungi are inconspicuous to the naked eye because of the small size of their structures, and their cryptic lifestyles in soil, on dead matter, and as symbionts of plants, animals, or other fungi. Fungi perform an essential role in the decomposition of organic matter and have fundamental roles in nutrient cycling and exchange. They have long been used as a direct source of food, such as mushrooms and truffles, as a leavening agent for bread, and in fermentation of various food products, such as wine, beer, and soy sauce.

Since the 1940s, fungi have been used for the production of antibiotics, and, more recently, various enzymes produced by fungi are used industrially and in detergents. Fungi are also used as biological agents to control weeds and pests. Many species produce bioactive compounds called mycotoxins, such as alkaloids and polyketides, that are toxic to animals including humans. The fruiting structures of a few species are consumed recreationally or in traditional ceremonies as a source of psychotropic compounds. Fungi can break down manufactured materials and buildings, and become significant pathogens of humans and other animals. Losses of crops due to fungal diseases or food spoilage can have a large impact on human food supplies and local economies. Despite their importance on human affairs, little is known of the true biodiversity of Kingdom Fungi, which has been estimated at around 1.5 million species, with about 5% of these having been formally classified.

Fomitiporia ellipsoidea is a species of polypore fungus in the family Hymenochaetaceae, a specimen of which produced the largest fungal fruit body ever recorded. Found in China, the fruit bodies produced by the species are brown, woody basidiocarps that grow on dead wood, where the fungus feeds as a saprotroph. The basidiocarps are perennial, allowing them to grow very large under favourable circumstances. They are resupinate, measuring 30 centimetres (12 in) or more in length, though typically extending less than a centimetre from the surface of the wood. F. ellipsoidea produces distinct ellipsoidal spores, after which it is named, and unusual setae. These two features allow it to be readily differentiated microscopically from other, similar species. A number of chemical compounds have been isolated from the species, including several steroidal compounds. These may have pharmacological applications, but further research is needed.

First recorded in 2008 by Bao-Kai Cui and Yu-Cheng Dai in Fujian Province, it was revealed in 2011 that a very large fruit body, measuring up to 1,085 cm (427 in) in length, had been found by the pair on Hainan Island. The specimen, which was 20 years old, was estimated to weigh between 400 and 500 kilograms (880 and 1,100 lb). This was markedly larger than the previously largest recorded fruit body, a specimen of Rigidoporus ulmarius found in the United Kingdom, which had a circumference of 425 cm (167 in). The findings were formally published in September 2011, but attracted international attention from the mainstream press prior to this.

Mycena flavoalba, commonly known as the ivory bonnet, is a species of inedible mushroom in the family Mycenaceae. The cap is initially conical in shape, before becoming convex and then flattening out; it may reach dimensions of up to 1.5 cm (0.6 in) across. The cap color is ivory-white to yellowish white, sometimes more yellowish at the center. The tubular stems are up to 8 cm (3.1 in) long and 2.5 mm (0.10 in) thick, and have long, coarse white hairs at their bases. The mushroom is found in Europe, the Middle East, and North America, where it grows scattered or in dense groups under conifers and on humus in oak woods.
edit

If you want to help Wikipedia to improve its coverage of fungi, here are some things you can do... 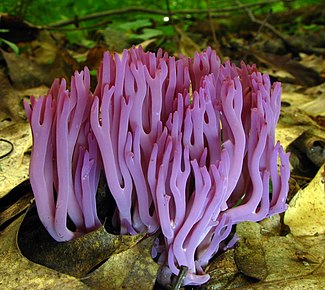 The following are images from various fungi-related articles on Wikipedia.
edit