From Wikipedia
https://en.wikipedia.org/wiki/Portal:Chemistry
Wikipedia portal for content related to Chemistry

An oil painting of a chemist ( Ana Kansky, painted by Henrika Šantel in 1932)

Chemistry is the scientific study of the properties and behavior of matter. It is a natural science that covers the elements that make up matter to the compounds composed of atoms, molecules and ions: their composition, structure, properties, behavior and the changes they undergo during a reaction with other substances.

In the scope of its subject, chemistry occupies an intermediate position between physics and biology. It is sometimes called the central science because it provides a foundation for understanding both basic and applied scientific disciplines at a fundamental level. For example, chemistry explains aspects of plant growth ( botany), the formation of igneous rocks ( geology), how atmospheric ozone is formed and how environmental pollutants are degraded ( ecology), the properties of the soil on the moon ( cosmochemistry), how medications work ( pharmacology), and how to collect DNA evidence at a crime scene ( forensics). 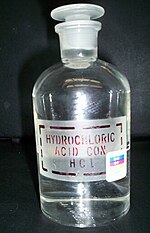 The chemical substance hydrochloric acid is the aqueous ( water-based) solution of hydrogen chloride ( H Cl) gas. It is a strong acid, the major component of gastric acid and of wide industrial use. As a highly corrosive liquid, hydrochloric acid should be handled only with appropriate safety precautions.

Hydrochloric acid, or muriatic acid by its historical but still occasionally used name, has been an important and frequently used chemical from early history, and was discovered by the alchemist Jābir ibn Hayyān around 800. It was used throughout the Middle Ages by alchemists in the quest for the philosopher's stone, and later by several European scientists including Glauber, Priestley, and Davy, to help establish modern chemical knowledge.

During the Industrial Revolution, it became an important industrial chemical for many applications, including the large scale production of organic compounds such as vinyl chloride for PVC plastic and MDI/ TDI for polyurethane and smaller scale applications, such as production of gelatin and other ingredients in food, and leather processing. Currently, production is approximately 20 million metric tonnes annually (20 Mt/year) of HCl gas.

History and Philosophy of Chemistry

Many chemists have an interest in the history of chemistry. Those with philosophical interests will be interested that the philosophy of chemistry has quite recently developed along a path somewhat different from the general philosophy of science.

There is a Wikipedia Project on the History of Science.

Wikipedia:WikiProject Chemicals/Data is a collection of links and references that are useful for chemistry-related works. This includes free online chemical databases, publications, patents, computer programs, and various tools.

unit-conversion.info A good place to figure out what equals what.

MathMol MathMol (Mathematics and Molecules) is a good starting point for those interested in the field of molecular modeling.

ABC-Chemistry A directory of free full-text journals in chemistry, biochemistry and related subjects.

The Element Song A goofy little song about all of the elements.

Jacobus Henricus van 't Hoff (1852-1911) was a Dutch physical and organic chemist, and recipient of the inaugural Nobel Prize for Chemistry. His first major findings accounted for the phenomenon of optical activity by assuming that the chemical bonds between carbon atoms and their neighbors were directed towards the corners of a regular tetrahedron. This three-dimensional structure perfectly accounted for the isomers found in nature ( stereochemistry). He shares credit for this idea with the French chemist Joseph Le Bel, who independently came up with the same idea. He received the first Nobel Prize for his work on relating the behaviour of solutions to that displayed by gases.