From Wikipedia
https://en.wikipedia.org/wiki/Portal:Biography
Wikipedia portal for content related to Biography 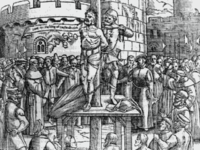 A biography, or simply bio, is a detailed description of a person's life. It involves more than just the basic facts like education, work, relationships, and death; it portrays a person's experience of these life events. Unlike a profile or curriculum vitae ( résumé), a biography presents a subject's life story, highlighting various aspects of their life, including intimate details of experience, and may include an analysis of the subject's personality.

Biographical works are usually non-fiction, but fiction can also be used to portray a person's life. One in-depth form of biographical coverage is called legacy writing. Works in diverse media, from literature to film, form the genre known as biography.

The following are images from various biography-related articles on Wikipedia.

Do you have a question about Wikipedia biographical content that you can't find the answer to? Consider asking it at the Wikipedia reference desk.

For editor resources and to collaborate with other editors on improving Wikipedia's Biography-related articles, see WikiProject Biography.

16 March 2022 – China–United States relations, Chinese espionage in the United States
Prosecutors for the U.S. Justice Department accuse five people working on behalf of the Chinese Ministry of State Security of conspiring to spy on and intimidate several dissidents living in the United States, such as the father of Olympic figure skater Alysa Liu, and Tiananmen Square protest leader and current congressional candidate Xiong Yan. The department says it is the first time that federal elections in the country have been interfered with in this manner. Three have been arrested while two remain at large. (The Guardian) (BBC News)
15 March 2022 –
Burkinabè architect Diébédo Francis Kéré wins the 2022 Pritzker Architecture Prize, becoming the first African and black person to do so. (The Guardian)
11 March 2022 – Protests against the 2022 Russian invasion of Ukraine
Russian opposition leader Alexei Navalny renews calls for anti-war and anti-Putin protests in cities across Russia. (Reuters)
11 March 2022 –
Gabriel Boric is sworn-in as President of Chile, becoming the youngest person to serve as President. (Reuters)
10 March 2022 – 2022 South Korean presidential election
Conservative opposition leader Yoon Suk-yeol is confirmed as the winner of yesterday's presidential election with 48.59% of the vote. He will take office as President of South Korea on May 10. (BBC News)
8 March 2022 – Aftermath of the 2021 United States Capitol attack
Proud Boys leader Enrique Tarrio is indicted on conspiracy charges of obstructing the U.S. Congress during the January 6 attack at the United States Capitol. (Politico)

Quote of the week

"Blue Moon, now I'm no longer alone,
without a dream in my heart, without a love of my own."