From Wikipedia
https://en.wikipedia.org/wiki/Portal:Aviation
Wikipedia portal for content related to Aviation

Aviation began in the 18th century with the development of the hot air balloon, an apparatus capable of atmospheric displacement through buoyancy. Some of the most significant advancements in aviation technology came with the controlled gliding flying of Otto Lilienthal in 1896; then a large step in significance came with the construction of the first powered airplane by the Wright brothers in the early 1900s. Since that time, aviation has been technologically revolutionized by the introduction of the jet which permitted a major form of transport throughout the world. ( Full article...)

Air Force One
An airport is a facility where aircraft can take off and land. At the very minimum, an airport consists of one runway (or helipad), but other common components are hangars and terminal buildings. Apart from these, an airport may have a variety of facilities and infrastructure, including fixed base operator services, air traffic control, passenger facilities such as restaurants and lounges, and emergency services. ( Full article...)
More selected articles

JetBlue Airways Flight 292
Credit:  Andrew Marino
JetBlue Airways Flight 292, an Airbus A320-232, making an emergency landing at LAX on September 21, 2005 after the front landing gear malfunctioned. The front gear was turned perpendicular to the runway causing the tires to be torn off and sparks to fly up on impact. No one was injured during the landing and passengers began to disembark less than seven minutes later.

...that Guy Menzies flew the first solo trans-Tasman flight (from Sydney to New Zealand) in 1931, but landed upside-down in a swamp?

...that the Battle of Britain Memorial Flight contains the world's oldest airworthy survivor of the Battle of Britain, alongside ten other historic aircraft - two of which fought over Normandy on D-Day? ... that 820 Naval Air Squadron was involved in attacks on the German battleships Bismarck and Tirpitz during the Second World War?

The following are images from various aviation-related articles on Wikipedia. 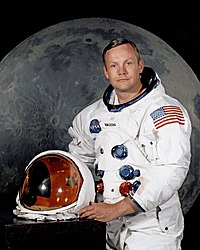 Neil Armstrong (born August 5, 1930) is a former American astronaut, test pilot, university professor, and United States Naval Aviator. He was the first person to set foot on the Moon. His first spaceflight was aboard Gemini 8 in 1966, for which he was the command pilot. On this mission, he performed the first manned docking of two spacecraft together with pilot David Scott. Armstrong's second and last spaceflight was as mission commander of the Apollo 11 moon landing mission on July 20, 1969. On this mission, Armstrong and Buzz Aldrin descended to the lunar surface and spent 2.5 hours exploring while Michael Collins orbited. Armstrong is a recipient of the Congressional Space Medal of Honor.

Before becoming an astronaut, Armstrong was in the United States Navy and saw action in the Korean War. After the war, he served as a test pilot at the National Advisory Committee for Aeronautics (NACA) High-Speed Flight Station, now known as the Dryden Flight Research Center, where he flew over 900 flights in a variety of aircraft. As a research pilot, Armstrong served as project pilot on the F-100 Super Sabre A and C aircraft, F-101 Voodoo, and the Lockheed F-104A Starfighter. He also flew the Bell X-1B, Bell X-5, North American X-15, F-105 Thunderchief, F-106 Delta Dart, B-47 Stratojet, KC-135 Stratotanker and Paresev. He graduated from Purdue University. 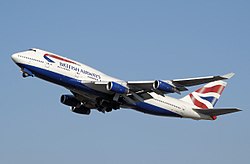 The Boeing 747 is a widebody commercial airliner, often referred to by the nickname Jumbo Jet. It is among the world's most recognizable aircraft, and was the first widebody ever produced. Manufactured by Boeing's Commercial Airplane unit in the United States, the original version of the 747 was two and a half times the size of the Boeing 707, one of the common large commercial aircraft of the 1960s. First flown commercially in 1970, the 747 held the passenger capacity record for 37 years.

The four-engine 747 uses a double deck configuration for part of its length. It is available in passenger, freighter and other versions. Boeing designed the 747's hump-like upper deck to serve as a first class lounge or (as is the general rule today) extra seating, and to allow the aircraft to be easily converted to a cargo carrier by removing seats and installing a front cargo door. Boeing did so because the company expected supersonic airliners (whose development was announced in the early 1960s) to render the 747 and other subsonic airliners obsolete; while believing that the demand for subsonic cargo aircraft would be robust into the future. The 747 in particular was expected to become obsolete after 400 were sold but it exceeded its critics' expectations with production passing the 1,000 mark in 1993. As of June 2009, 1,416 aircraft have been built, with 107 more in various configurations remaining on order.