From Wikipedia, the free encyclopedia
(Redirected from Portal:Arts)
Wikimedia portal

Lincoln Center for the Performing Arts 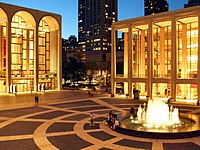 The arts are a very wide range of human practices of creative expression, storytelling and cultural participation. They encompass multiple diverse and plural modes of thinking, doing and being, in an extremely broad range of media. Both highly dynamic and a characteristically constant feature of human life, they have developed into innovative, stylized and sometimes intricate forms. This is often achieved through sustained and deliberate study, training and/or theorizing within a particular tradition, across generations and even between civilizations. The arts are a vehicle through which human beings cultivate distinct social, cultural and individual identities, while transmitting values, impressions, judgments, ideas, visions, spiritual meanings, patterns of life and experiences across time and space.

Prominent examples of the arts include:

They can employ skill and imagination to produce objects, performances, convey insights and experiences, and construct new environments and spaces.

The arts can refer to common, popular or everyday practices as well as more sophisticated and systematic, or institutionalized ones. They can be discrete and self-contained, or combine and interweave with other art forms, such as the combination of artwork with the written word in comics. They can also develop or contribute to some particular aspect of a more complex art form, as in cinematography. By definition, the arts themselves are open to being continually re-defined. The practice of modern art, for example, is a testament to the shifting boundaries, improvisation and experimentation, reflexive nature, and self-criticism or questioning that art and its conditions of production, reception, and possibility can undergo.

As both a means of developing capacities of attention and sensitivity, and as ends in themselves, the arts can simultaneously be a form of response to the world, and a way that our responses, and what we deem worthwhile goals or pursuits, are transformed. From prehistoric cave paintings, to ancient and contemporary forms of ritual, to modern-day films, art has served to register, embody and preserve our ever shifting relationships to each other and to the world. ( Full article...)

Eiffel Tower
Credit: Photo: Benh Lieu Song
The Eiffel Tower as seen from the Champ de Mars. At 324 metres (1,063 ft) tall, the tower, an iron lattice tower, is the tallest building in Paris, the most-visited paid monument in the world, as well as one of the most recognizable structures in the world. Named after its designer, Gustave Eiffel, it was built as an entrance arch for the 1889 Exposition Universelle and has since become the most prominent symbol of both Paris and France.

El Lissitzky was a Russian artist, designer, photographer, teacher, typographer, and architect. He was one of the most important figures of the Russian avant-garde, helping develop suprematism with his friend and mentor, Kazimir Malevich, and designed numerous exhibition displays and propaganda works for the former Soviet Union. His work greatly influenced the Bauhaus, Constructivist, and De Stijl movements and experimented with production techniques and stylistic devices that would go on to dominate 20th century graphic design. Lissitzky's entire career was laced with the belief that the artist could be an agent for change, later summarised with his edict, "das zielbewußte Schaffen" (The task-oriented creation). In 1941 he produced one of his last known works — a Soviet propaganda poster rallying the people to construct more tanks for the fight against Nazi Germany. ( Full article...)