Zero of a function Information 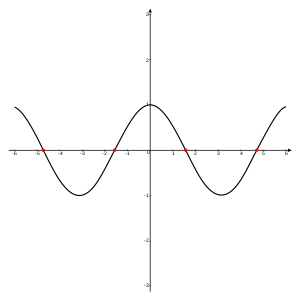 A graph of the function

In mathematics, a zero (also sometimes called a root) of a real-, complex-, or generally vector-valued function

of the domain of

; that is, the function

attains the value of 0 at

is the solution to the equation

A root of a polynomial is a zero of the corresponding polynomial function. [1] The fundamental theorem of algebra shows that any non-zero polynomial has a number of roots at most equal to its degree, and that the number of roots and the degree are equal when one considers the complex roots (or more generally, the roots in an algebraically closed extension) counted with their multiplicities. [3] For example, the polynomial

of degree two, defined by

-coordinates of the points where its graph meets the x-axis. An alternative name for such a point

in this context is an

Solution of an equation

Every equation in the unknown

may be rewritten as

by regrouping all the terms in the left-hand side. It follows that the solutions of such an equation are exactly the zeros of the function

. In other words, a "zero of a function" is precisely a "solution of the equation obtained by equating the function to 0", and the study of zeros of functions is exactly the same as the study of solutions of equations.

Every real polynomial of odd degree has an odd number of real roots (counting multiplicities); likewise, a real polynomial of even degree must have an even number of real roots. Consequently, real odd polynomials must have at least one real root (because the smallest odd whole number is 1), whereas even polynomials may have none. This principle can be proven by reference to the intermediate value theorem: since polynomial functions are continuous, the function value must cross zero, in the process of changing from negative to positive or vice versa (which always happens for odd functions).

The fundamental theorem of algebra states that every polynomial of degree

complex roots, counted with their multiplicities. The non-real roots of polynomials with real coefficients come in conjugate pairs. [2] Vieta's formulas relate the coefficients of a polynomial to sums and products of its roots.

In various areas of mathematics, the zero set of a function is the set of all its zeros. More precisely, if

is a real-valued function (or, more generally, a function taking values in some additive group), its zero set is

, the inverse image of

The term zero set is generally used when there are infinitely many zeros, and they have some non-trivial topological properties. For example, a level set of a function

is the zero set of

is the complement of the zero set of

The zero set of a linear map is also called kernel.

In algebraic geometry, the first definition of an algebraic variety is through zero sets. Specifically, an affine algebraic set is the intersection of the zero sets of several polynomials, in a polynomial ring

over a field. In this context, a zero set is sometimes called a zero locus.

In analysis and geometry, any closed subset of

. This extends to any smooth manifold as a corollary of paracompactness.

In differential geometry, zero sets are frequently used to define manifolds. An important special case is the case that

is a smooth function from

. If zero is a regular value of

, then the zero set of

is a smooth manifold of dimension

by the regular value theorem.

For example, the unit

is the zero set of the real-valued function