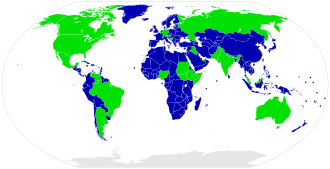 A world map distinguishing countries of the world as federations (green) from unitary states (blue), a work of political science

Political science is the scientific study of politics. It is a social science dealing with systems of governance and power, and the analysis of political activities, political thought, political behavior, and associated constitutions and laws. [1]

always distinguished from political philosophy, and the modern discipline has a clear set of antecedents including also moral philosophy, political economy, political theology, history, and other fields concerned with normative determinations of what ought to be and with deducing the characteristics and functions of the ideal state.

As part of a UNESCO initiative to promote political science in the late 1940s, the International Political Science Association was founded in 1949, as well as national associations in France in 1949, Britain in 1950, and West Germany in 1951. [4]

In the 1950s and the 1960s, a behavioral revolution stressing the systematic and rigorously scientific study of individual and group behavior swept the discipline. A focus on studying political behavior, rather than institutions or interpretation of legal texts, characterized early behavioral political science, including work by Robert Dahl, Philip Converse, and in the collaboration between sociologist Paul Lazarsfeld and public opinion scholar Bernard Berelson.

The late 1960s and early 1970s witnessed a takeoff in the use of deductive, game-theoretic formal modelling techniques aimed at generating a more analytical corpus of knowledge in the discipline. This period saw a surge of research that borrowed theory and methods from economics to study political institutions, such as the United States Congress, as well as political behavior, such as voting. William H. Riker and his colleagues and students at the University of Rochester were the main proponents of this shift.

Despite considerable research progress in the discipline based on all the kinds of scholarship discussed above, it has been observed that progress toward systematic theory has been modest and uneven. [7]

Some evolutionary psychology theories argue that humans have evolved a highly developed set of psychological mechanisms for dealing with politics. However, these mechanisms evolved for dealing with the small group politics that characterized the ancestral environment and not the much larger political structures in today's world. This is argued to explain many important features and systematic cognitive biases of current politics. [9]

Political science is a social study concerning the allocation and transfer of power in decision making, the roles and systems of governance including governments and international organizations, political behaviour, and public policies. It measures the success of governance and specific policies by examining many factors, including stability, justice, material wealth, peace, and public health. Some political scientists seek to advance positive theses (which attempt to describe how things are, as opposed to how they should be) by analysing politics; others advance normative theses, such as by making specific policy recommendations. The study of politics and policies can be closely connected—for example, in comparative analyses of which types of political institutions tend to produce certain types of policies. [10] Political science provides analysis and predictions about political and governmental issues. [11] Political scientists examine the processes, systems and political dynamics of countries and regions of the world, often to raise public awareness or to influence specific governments. [11]

Political scientists may provide the frameworks from which journalists, special interest groups, politicians, and the electorate analyze issues. According to Chaturvedy,

The theory of political transitions, [16] and the methods of analyzing and anticipating [17] crises, [18] form an important part of political science. Several general indicators of crises and methods were proposed for anticipating critical transitions. [19] Among them, one statistical indicator of crisis, a simultaneous increase of variance and correlations in large groups, was proposed for crisis anticipation and may be successfully used in various areas. [20] Its applicability for early diagnosis of political crises was demonstrated by the analysis of the prolonged stress period preceding the 2014 Ukrainian economic and political crisis. There was a simultaneous increase in the total correlation between the 19 major public fears in the Ukrainian society (by about 64%) and in their statistical dispersion (by 29%) during the pre-crisis years. [21] A feature shared by certain major revolutions is that they were not predicted. The theory of apparent inevitability of crises and revolutions was also developed. [22]

The study of major crises, both political crises and external crises that can affect politics, is not limited to attempts to predict regime transitions or major changes in political institutions. Political scientists also study how governments handle unexpected disasters, and how voters in democracies react to their governments' preparations for and responses to crises. [23]

Many political scientists conduct research in one of four areas, described below: [24]

Some political science departments also classify methodology as well as scholarship on the domestic politics of a particular country as distinct fields. In the United States, American politics is often treated as a separate subfield. In contrast to this traditional classification, some academic departments organize scholarship into thematic categories, including political philosophy, political behaviour (including public opinion, collective action, and identity), and political institutions (including legislatures and international organizations). Political science conferences and journals often emphasize scholarship in more specific categories. The American Political Science Association, for example, has 42 organized sections that address various methods and topics of political inquiry. [27]

Political scientists also use and develop theoretical tools like game theory and agent-based models to study a host of political systems and situations. [38]

Political theorists approach theories of political phenomena with a similar diversity of positions and tools, including feminist political theory, historical analysis associated with the Cambridge school, and Straussian approaches.

Political science may overlap with topics of study that are the traditional focuses of other social sciences—for example, when sociological norms or psychological biases are connected to political phenomena. In these cases, political science may either inherit their methods of study or develop a contrasting approach. [39] For example, Lisa Wedeen has argued that political science's approach to the idea of culture, originating with Gabriel Almond and Sidney Verba and exemplified by authors like Samuel P. Huntington, could benefit from aligning more closely with the study of culture in anthropology. [39] In turn, methodologies that are developed within political science may influence how researchers in other fields, like public health, conceive of and approach political processes and policies. [40]

Political science, possibly like the social sciences as a whole, can be described "as a discipline which lives on the fault line between the 'two cultures' in the academy, the sciences and the humanities." [41] Thus, in most American colleges, especially liberal arts colleges it would be located within the school or college of arts and sciences, if no separate college of arts and sciences exist or if the college or university prefers that it be in a separate constituent college or academic department, political science may be a separate department housed as part of a division or school of humanities or liberal arts [42] while at some universities, especially research universities and in particular those that have a strong cooperation between research, undergraduate, and graduate faculty with a stronger more applied emphasis in public administration, political science would be taught by the university's public policy school. Whereas classical political philosophy is primarily defined by a concern for Hellenic and Enlightenment thought, political scientists are also marked by a great concern for " modernity" and the contemporary nation state, along with the study of classical thought, and as such share more terminology with sociologists (e.g., structure and agency).

Most United States colleges and universities offer BA programs in political science. MA or MAT and PhD or EdD programs are common at larger universities. The term political science is more popular in North America than elsewhere; other institutions, especially those outside the United States, see political science as part of a broader discipline of political studies, politics, or government. While political science implies the use of the scientific method, political studies implies a broader approach, although the naming of degree courses does not necessarily reflect their content.[ citation needed] Separate programs (often professional degrees) in international relations, public policy, and public administration, are not uncommon at both the undergraduate and postgraduate levels, although most but not all undergraduate level education in these sub-fields are generally found in academic concentration within a political science academic major. Master's-level programs in public administration are professional degrees covering public policy along with other applied subjects; they are often seen as more linked to politics than any other discipline, which may be reflected by being housed in that department. [43]

The national honor society for college and university students of government and politics in the United States is Pi Sigma Alpha.

There are different genres of writings in political sciences; including but not limited to: [44]

The most common piece of writing in political sciences are research papers, which investigate an original research question. [45]

Wikibooks has a book on the topic of: Political Science

Scholia has a topic profile for Political science.