From Wikipedia
(Redirected from Poisonous mushroom)
https://en.wikipedia.org/wiki/Poisonous_mushroom
Harmful effects from ingestion of toxic substances present in a mushroom
Medical condition

Mushroom poisoning is poisoning resulting from the ingestion of mushrooms that contain toxic substances. Its symptoms can vary from slight gastrointestinal discomfort to death in about 10 days. Mushroom toxins are secondary metabolites produced by the fungus.

Mushroom poisoning is usually the result of ingestion of wild mushrooms after misidentification of a toxic mushroom as an edible species. The most common reason for this misidentification is a close resemblance in terms of color and general morphology of the toxic mushrooms species with edible species. To prevent mushroom poisoning, mushroom gatherers familiarize themselves with the mushrooms they intend to collect, as well as with any similar-looking toxic species. The safety of eating wild mushrooms may depend on methods of preparation for cooking.

Poisonous mushrooms contain a variety of different toxins that can differ markedly in toxicity. Symptoms of mushroom poisoning may vary from gastric upset to organ failure resulting in death. Serious symptoms do not always occur immediately after eating, often not until the toxin attacks the kidney or liver, sometimes days or weeks later.

The most common consequence of mushroom poisoning is simply gastrointestinal upset. Most "poisonous" mushrooms contain gastrointestinal irritants that cause vomiting and diarrhea (sometimes requiring hospitalization), but usually no long-term damage. However, there are a number of recognized mushroom toxins with specific, and sometimes deadly, effects:

The period between ingestion and the onset of symptoms varies dramatically between toxins, some taking days to show symptoms identifiable as mushroom poisoning.

New species of fungi are continuing to be discovered, with an estimated number of 800 new species registered annually. This, added to the fact that many investigations have recently reclassified some species of mushrooms from edible to poisonous has made older classifications insufficient at describing what now is known about the different species of fungi that are harmful to humans. Thus, contrary to what older registers state, it is now thought that of the approximately 100,000 known fungi species found worldwide, about 100 of them are poisonous to humans. [14] However, by far the majority of mushroom poisonings are not fatal, [15] and the majority of fatal poisonings are attributable to the Amanita phalloides mushroom. [16] 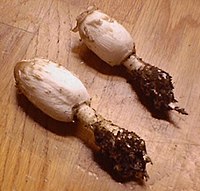 A majority of these cases are due to mistaken identity. [17] This is a common occurrence with A. phalloides in particular, due to its resemblance to the Asian paddy-straw mushroom, Volvariella volvacea. Both are light-colored and covered with a universal veil when young.

Amanitas can be mistaken for other species, as well, in particular when immature. On at least one occasion [18] they have been mistaken for Coprinus comatus. In this case, the victim had some limited experience in identifying mushrooms, but did not take the time to correctly identify these particular mushrooms until after he began to experience symptoms of mushroom poisoning. 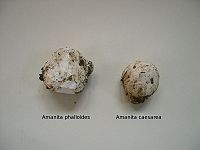 Amanitas, two examples of immature Amanitas, one deadly and one edible. 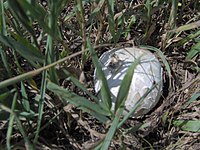 The author of Mushrooms Demystified, David Arora [4] cautions puffball-hunters to beware of Amanita "eggs", which are Amanitas still entirely encased in their universal veil. Amanitas at this stage are difficult to distinguish from puffballs. Foragers are encouraged to always cut the fruiting bodies of suspected puffballs in half, as this will reveal the outline of a developing Amanita should it be present within the structure.

A majority of mushroom poisonings, in general, are the result of small children, especially toddlers in the "grazing" stage, ingesting mushrooms found on the lawn. While this can happen with any mushroom, Chlorophyllum molybdites is often implicated due to its preference for growing in lawns. C. molybdites causes severe gastrointestinal upset but is not considered deadly poisonous.

A few poisonings are the result of misidentification while attempting to collect hallucinogenic mushrooms for recreational use. [19] In 1981, one fatality and two hospitalizations occurred following consumption of Galerina marginata, mistaken for a Psilocybe species. [20] Galerina and Psilocybe species are both small, brown, and sticky, and can be found growing together. However, Galerina contains amatoxins, the same poison found in the deadly Amanita species. Another case reports kidney failure following ingestion of Cortinarius orellanus, [21] a mushroom containing orellanine.

It is natural that accidental ingestion of hallucinogenic species also occurs, but is rarely harmful when ingested in small quantities. Cases of serious toxicity have been reported in small children. [12] Amanita pantherina, while containing the same hallucinogens as Amanita muscaria (e.g., ibotenic acid and muscimol), has been more commonly associated with severe gastrointestinal upset than its better-known counterpart. [4] 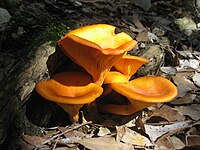 Jack-O-Lantern, a poisonous mushroom sometimes mistaken for a chanterelle. 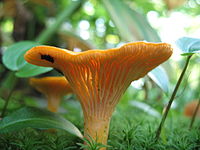 Although usually not fatal, Omphalotus spp., "Jack-o-lantern mushrooms", are another cause of sometimes significant toxicity. [4] They are sometimes mistaken for chanterelles. Both are bright-orange and fruit at the same time of year, although Omphalotus grows on wood and has true gills rather than the veins of a Cantharellus. They contain toxins known as illudins, which causes gastrointestinal symptoms.

Clitocybe dealbata, which is occasionally mistaken for an oyster mushroom or other edible species contains muscarine.

Toxicities can also occur with collection of morels. Even true morels, if eaten raw, will cause gastrointestinal upset. Typically, morels are thoroughly cooked before eating. Verpa bohemica, although referred to as "thimble morels" or "early morels" by some, have caused toxic effects in some individuals. [11] Gyromitra spp., " false morels", are deadly poisonous if eaten raw. They contain a toxin called gyromitrin, which can cause neurotoxicity, gastrointestinal toxicity, and destruction of the blood cells. [3] The Finns consume Gyromitra esculenta after parboiling, but this may not render the mushroom entirely safe, resulting in its being called the " fugu of the Finnish cuisine".

A more unusual toxin is coprine, a disulfiram-like compound that is harmless unless ingested within a few days of ingesting alcohol. It inhibits aldehyde dehydrogenase, an enzyme required for breaking down alcohol. Thus, the symptoms of toxicity are similar to being hung over—flushing, headache, nausea, palpitations, and, in severe cases, trouble breathing. Coprinus species, including Coprinopsis atramentaria, contain coprine. Coprinus comatus does not, [22] but it is best to avoid mixing alcohol with other members of this genus.

Paxillus involutus is also inedible when raw, but is eaten in Europe after pickling or parboiling. However, after the death of the German mycologist Dr. Julius Schäffer, it was discovered that the mushroom contains a toxin that can stimulate the immune system to attack its red blood cells. This reaction is rare but can occur even after safely eating the mushroom for many years. [24] Similarly, Tricholoma equestre was widely considered edible and good, until it was connected with rare cases of rhabdomyolysis. [25]

In the fall of 2004, thirteen deaths were associated with consumption of Pleurocybella porrigens or "angel's wings". [26] In general, these mushrooms are considered edible. All the victims died of an acute brain disorder, and all had pre-existing kidney disease. The exact cause of the toxicity was not known at this time and the deaths cannot be definitively attributed to mushroom consumption.

However, mushroom poisoning is not always due to mistaken identity. For example, the highly toxic ergot Claviceps purpurea, which grows on rye, is sometimes ground up with rye, unnoticed, and later consumed. This can cause devastating, even fatal effects, which is called ergotism.

Cases of idiosyncratic or unusual reactions to fungi can also occur. Some are probably due to allergy, others to some other kind of sensitivity. It is not uncommon for a person to experience gastrointestinal upset associated with one particular mushroom species or genus. [26]

Some mushrooms might concentrate toxins from their growth substrate, such as Chicken of the Woods growing on yew trees. [27]

Of the most lethal mushrooms, five—the death cap (A. phalloides), the three destroying angels (A. virosa, A. bisporigera, and A. ocreata), and the fool's mushroom (A. verna)—belong to the genus Amanita, and two more—the deadly webcap (C. rubellus), and the fool's webcap (C. orellanus)—are from the genus Cortinarius. Several species of Galerina, Lepiota, and Conocybe also contain lethal amounts of amatoxins. Deadly species are listed in the List of deadly fungi.

The following species may cause great discomfort, sometimes requiring hospitalization, but are not considered deadly.

Some mushrooms contain less toxic compounds and, therefore, are not severely poisonous. Poisonings by these mushrooms may respond well to treatment. However, certain types of mushrooms contain very potent toxins and are very poisonous; so even if symptoms are treated promptly, mortality is high. With some toxins, death can occur in a week or a few days. Although a liver or kidney transplant may save some patients with complete organ failure, in many cases there are no organs available. Patients hospitalized and given aggressive support therapy almost immediately after ingestion of amanitin-containing mushrooms have a mortality rate of only 10%, whereas those admitted 60 or more hours after ingestion have a 50–90% mortality rate. [30] In the United States alone each year, an average of seven people die from mushroom poisoning. [31] Over 1,300 emergency room visits in the United States were attributed to poisonous mushroom ingestion in 2016, with about 9% of patients experiencing a serious adverse outcome. [32]

Examples of erroneous folklore "rules" include: