From Wikipedia
https://en.wikipedia.org/wiki/Pointwise
Applying operations to functions in terms of values for each input "point"

In mathematics, the qualifier pointwise is used to indicate that a certain property is defined by considering each value

An important class of pointwise concepts are the pointwise operations, that is, operations defined on functions by applying the operations to function values separately for each point in the domain of definition. Important relations can also be defined pointwise. 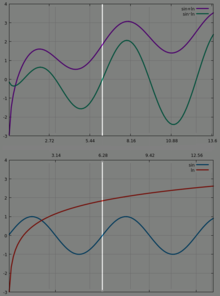 Commonly, o and O are denoted by the same symbol. A similar definition is used for unary operations o, and for operations of other arity.[ citation needed]

An example of an operation on functions which is not pointwise is convolution.

Pointwise operations inherit such properties as associativity, commutativity and distributivity from corresponding operations on the codomain. If

is some algebraic structure, the set of all functions

to the carrier set of

can be turned into an algebraic structure of the same type in an analogous way.

Componentwise operations are usually defined on vectors, where vectors are elements of the set

for some natural number

. If we denote the

-th component of any vector

, then componentwise addition is

Componentwise operations can be defined on matrices. Matrix addition, where

is a componentwise operation while matrix multiplication is not.

A tuple can be regarded as a function, and a vector is a tuple. Therefore, any vector

corresponds to the function

converges pointwise to a function

This article incorporates material from Pointwise on PlanetMath, which is licensed under the Creative Commons Attribution/Share-Alike License.