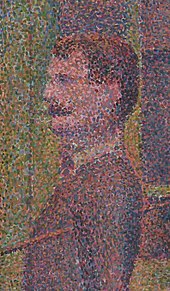 Pointillism ( /ˈpwæ̃tɪlɪzəm/, also US: /ˈpwɑːn-ˌ ˈpɔɪn-/) [1] is a technique of painting in which small, distinct dots of color are applied in patterns to form an image.

Georges Seurat and Paul Signac developed the technique in 1886, branching from Impressionism. The term "Pointillism" was coined by art critics in the late 1880s to ridicule the works of these artists, but is now used without its earlier pejorative connotation. [2] The movement Seurat began with this technique is known as Neo-impressionism. The Divisionists used a similar technique of patterns to form images, though with larger cube-like brushstrokes. [3]

The technique relies on the ability of the eye and mind of the viewer to blend the color spots into a fuller range of tones. It is related to Divisionism, a more technical variant of the method. Divisionism is concerned with color theory, whereas pointillism is more focused on the specific style of brushwork used to apply the paint. [2] It is a technique with few serious practitioners today and is notably seen in the works of Seurat, Signac, and Cross. 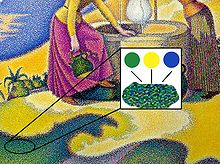 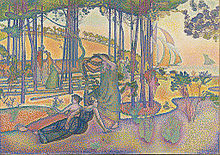 From 1905 to 1907, Robert Delaunay and Jean Metzinger painted in a Divisionist style with large squares or 'cubes' of color: the size and direction of each gave a sense of rhythm to the painting, yet color varied independently of size and placement. [4] This form of Divisionism was a significant step beyond the preoccupations of Signac and Cross. In 1906, the art critic Louis Chassevent recognized the difference and, as art historian Daniel Robbins pointed out, used the word "cube" which would later be taken up by Louis Vauxcelles to baptize Cubism. Chassevent writes:

M. Metzinger is a mosaicist like M. Signac but he brings more precision to the cutting of his cubes of color which appear to have been made mechanically [...]. [5] [6] [7] [8]

The practice of Pointillism is in sharp contrast to the traditional methods of blending pigments on a palette. Pointillism is analogous to the four-color CMYK printing process used by some color printers and large presses that place dots of cyan, magenta, yellow and key (black). Televisions and computer monitors use a similar technique to represent image colors using Red, Green, and Blue (RGB) colors. [9]

If red, blue, and green light (the additive primaries) are mixed, the result is something close to white light (see Prism (optics)). Painting is inherently subtractive, but Pointillist colors often seem brighter than typical mixed subtractive colors. This may be partly because subtractive mixing of the pigments is avoided, and because some of the white canvas may be showing between the applied dots. [9]

The painting technique used for Pointillist color mixing is at the expense of the traditional brushwork used to delineate texture. [9]

The majority of Pointillism is done in oil paint. Anything may be used in its place, but oils are preferred for their thickness and tendency not to run or bleed. [10]

Pointillism also refers to a style of 20th-century music composition. Different musical notes are made in seclusion, rather than in a linear sequence, giving a sound texture similar to the painting version of Pointillism. This type of music is also known as punctualism or klangfarbenmelodie. 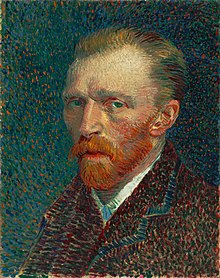 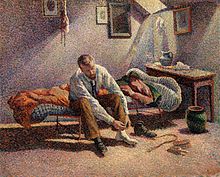