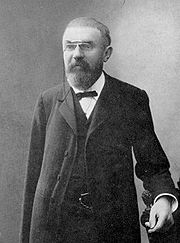 The Poincaré group, named after Henri Poincaré (1906), [1] was first defined by Hermann Minkowski (1908) as the group of Minkowski spacetime isometries. [2] [3] It is a ten-dimensional non-abelian Lie group that is of importance as a model in our understanding of the most basic fundamentals of physics.

A Minkowski spacetime isometry has the property that the interval between events is left invariant. For example, if everything were postponed by two hours, including the two events and the path you took to go from one to the other, then the time interval between the events recorded by a stop-watch you carried with you would be the same. Or if everything were shifted five kilometres to the west, or turned 60 degrees to the right, you would also see no change in the interval. It turns out that the proper length of an object is also unaffected by such a shift. A time or space reversal (a reflection) is also an isometry of this group.

In Minkowski space (i.e. ignoring the effects of gravity), there are ten degrees of freedom of the isometries, which may be thought of as translation through time or space (four degrees, one per dimension); reflection through a plane (three degrees, the freedom in orientation of this plane); or a " boost" in any of the three spatial directions (three degrees). Composition of transformations is the operation of the Poincaré group, with proper rotations being produced as the composition of an even number of reflections.

In classical physics, the Galilean group is a comparable ten-parameter group that acts on absolute time and space. Instead of boosts, it features shear mappings to relate co-moving frames of reference.

Poincaré symmetry is the full symmetry of special relativity. It includes:

The last two symmetries, J and K, together make the Lorentz group (see also Lorentz invariance); the semi-direct product of the translations group and the Lorentz group then produce the Poincaré group. Objects that are invariant under this group are then said to possess Poincaré invariance or relativistic invariance.

10 generators (in four spacetime dimensions) associated with the Poincaré symmetry, by Noether's theorem, imply 10 conservation laws: 1 for the energy, 3 for the momentum, 3 for the angular momentum and 3 for the velocity of the center of mass. [4] [5]

The Poincaré group is the group of Minkowski spacetime isometries. It is a ten-dimensional noncompact Lie group. The abelian group of translations is a normal subgroup, while the Lorentz group is also a subgroup, the stabilizer of the origin. The Poincaré group itself is the minimal subgroup of the affine group which includes all translations and Lorentz transformations. More precisely, it is a semidirect product of the translations and the Lorentz group,

Another way of putting this is that the Poincaré group is a group extension of the Lorentz group by a vector representation of it; it is sometimes dubbed, informally, as the inhomogeneous Lorentz group. In turn, it can also be obtained as a group contraction of the de Sitter group SO(4,1) ~ Sp(2,2), as the de Sitter radius goes to infinity.

Its positive energy unitary irreducible representations are indexed by mass (nonnegative number) and spin ( integer or half integer) and are associated with particles in quantum mechanics (see Wigner's classification).

In quantum field theory, the universal cover of the Poincaré group

which may be identified with the double cover

is more important, because representations of

are not able to describe fields with spin 1/2; i.e. fermions. Here

is the group of complex

matrices with unit determinant, isomorphic to the Lorentz-signature spin group

) part of the Lorentz subgroup (its identity component),

, is connected to the identity and is thus provided by the exponentiation

of this Lie algebra. In component form, the Poincaré algebra is given by the commutation relations: [7] [8]

is the generator of translations,

is the generator of Lorentz transformations, and

The bottom commutation relation is the ("homogeneous") Lorentz group, consisting of rotations,

. In this notation, the entire Poincaré algebra is expressible in noncovariant (but more practical) language as

where the bottom line commutator of two boosts is often referred to as a "Wigner rotation". The simplification

permits reduction of the Lorentz subalgebra to

and efficient treatment of its associated representations. In terms of the physical parameters, we have

The Casimir invariants of this algebra are

is the Pauli–Lubanski pseudovector; they serve as labels for the representations of the group.

The Poincaré group is the full symmetry group of any relativistic field theory. As a result, all elementary particles fall in representations of this group. These are usually specified by the four-momentum squared of each particle (i.e. its mass squared) and the intrinsic quantum numbers

is the spin quantum number,

is the parity and

is the charge-conjugation quantum number. In practice, charge conjugation and parity are violated by many quantum field theories; where this occurs,

are forfeited. Since CPT symmetry is invariant in quantum field theory, a time-reversal quantum number may be constructed from those given.

The definitions above can be generalized to arbitrary dimensions in a straightforward manner. The d-dimensional Poincaré group is analogously defined by the semi-direct product

with the analogous multiplication

The Lie algebra retains its form, with indices µ and ν now taking values between 0 and d − 1. The alternative representation in terms of Ji and Ki has no analogue in higher dimensions.

The Wikibook Associative Composition Algebra has a page on the topic of: Poincaré group
Retrieved from " https://en.wikipedia.org/?title=Poincaré_group&oldid=1100594879"
Categories:
Hidden categories: