High-energetic electrical plasma is a technology currently being developed in deep drilling applications to address many issues related to drilling in water environment or in the production of boreholes with a wide range of diameters. 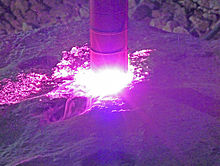 An electric arc is an electrical breakdown of a gas that produces an ongoing plasma discharge, resulting from a current flowing through normally nonconductive media such as air or gas. An arc discharge is characterized by a lower voltage than a glow discharge, and relies on thermionic emission of electrons from the electrodes supporting the arc. The electric arc is influenced by factors such as: the gas flow, inner and outer magnetic fields, and construction elements of the chamber which confines the arc. The development of highly effective plasma torches to be used as a source of the thermal plasma demands a deep understanding of the wide spectrum of processes taking place in the discharge chamber.