A palm plantation in Galilee in Israel

A plantation is an agricultural estate, generally centered on a plantation house, meant for farming that specializes in cash crops, usually mainly planted with a single crop, with perhaps ancillary areas for vegetables for eating and so on. The crops that are grown include cotton, coffee, tea, cocoa, sugar cane, opium, sisal, oil seeds, oil palms, fruits, rubber trees and forest trees. Protectionist policies and natural comparative advantage have sometimes contributed to determining where plantations are located.

In modern use the term is usually taken to refer only to large-scale estates, but in earlier periods, before about 1800, it was the usual term for a farm of any size in the southern parts of British North America, with, as Noah Webster noted, "farm" becoming the usual term from about Maryland northwards. It was used in most British colonies, but very rarely in the United Kingdom itself in this sense. There, as also in America, it was used mainly for tree plantations, areas artificially planted with trees, whether purely for commercial forestry, or partly for ornamental effect in gardens and parks, when it might also cover plantings of garden shrubs. [1]

Among the earliest examples of plantations these were the latifundia of the Roman Empire, which produced large quantities of grain, wine and olive oil for export. Plantation agriculture grew rapidly with the increase in international trade and the development of a worldwide economy that followed the expansion of European colonialism.

Tree plantations, in the US often called tree farms, are established for the commercial production of timber, or tree products such as palm oil, coffee or rubber.

Teak and bamboo plantations in India have given good results and an alternative crop solution to farmers of central India, where conventional farming was popular. But due to rising input costs of farming many farmers have done teak and bamboo plantations which require very little water (only during first two years). Teak and bamboo have legal protection from theft. Bamboo, once planted, gives output for 50 years till flowering occurs. Teak requires 20 years to grow to full maturity and fetch returns.

Probably the single most important factor a plantation has on the local environment is the site where the plantation is established. If natural forest is cleared for a planted forest then a reduction in biodiversity and loss of habitat will likely result. In some cases, their establishment may involve draining wetlands to replace mixed hardwoods that formerly predominated with pine species. If a plantation is established on abandoned agricultural land, or highly degraded land, it can result in an increase in both habitat and biodiversity. A planted forest can be profitably established on lands that will not support agriculture or suffer from lack of natural regeneration.

The tree species used in a plantation is also an important factor. Where non-native varieties or species are grown, few of the native fauna are adapted to exploit these and further biodiversity loss occurs. However, even non-native tree species may serve as corridors for wildlife and act as a buffer for native forest, reducing edge effect.

Once a plantation is established, how it is managed becomes the important environmental factor. The single most important factor of management is the rotation period. Plantations harvested on longer rotation periods (30 years or more) can provide similar benefits to a naturally regenerated forest managed for wood production, on a similar rotation. This is especially true if native species are used. In the case of exotic species, the habitat can be improved significantly if the impact is mitigated by measures such as leaving blocks of native species in the plantation, or retaining corridors of natural forest. In Brazil, similar measures are required by government regulation 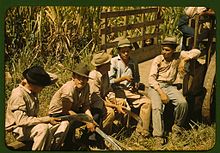 Sugar plantations were highly valued in the Caribbean by the British and French colonists in the 17th and 18th centuries and the use of sugar in Europe rose during this period. Sugarcane is still an important crop in Cuba. Sugar plantations also arose in countries such as Barbados and Cuba because of the natural endowments that they had. These natural endowments included soil that was conducive to growing sugar and a high marginal product of labor realized through the increasing number of enslaved people.

Fruit orchards are sometimes considered to be plantations.

These include tobacco, sugarcane, pineapple, bell pepper, and cotton, especially in historical usage.

Before the rise of cotton in the American South, indigo and rice were also sometimes called plantation crops.

When Newfoundland was colonized by England in 1610, the original colonists were called "Planters" and their fishing rooms were known as "fishing plantations". These terms were used well into the 20th century.

The following three plantations are maintained by the Government of Newfoundland and Labrador as provincial heritage sites:

1913 photo: African-Americans picking cotton on a plantation in the South

African slave labour was used extensively to work on early plantations (such as tobacco, rice, cotton, and sugar plantations) in the American colonies and the United States, throughout the Caribbean, the Americas, and in European-occupied areas of Africa.

In modern times, the low wages typically paid to plantation workers are the basis of plantation profitability in some areas.

In more recent times, overt slavery has been replaced by para-slavery or slavery-in-kind, including the sharecropping system. At its most extreme, workers are in " debt bondage": they must work to pay off a debt at such punitive interest rates that it may never be paid off. Others work unreasonably long hours and are paid subsistence wages that (in practice) may only be spent in the company store.

In Brazil, a sugarcane plantation was termed an engenho ("engine"), and the 17th-century English usage for organized colonial production was "factory." Such colonial social and economic structures are discussed at Plantation economy.

Sugar workers on plantations in Cuba and elsewhere in the Caribbean lived in company towns known as bateyes.

This section is an excerpt from Plantation complexes in the Southern United States. 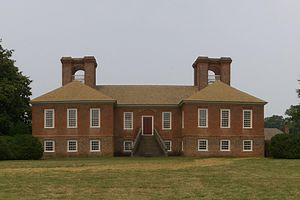 Stratford Hall is a classic example of Southern plantation architecture, built on an H-plan and completed in 1738 near Lerty, Virginia.

A plantation complex in the Southern United States is the built environment (or complex) that was common on agricultural plantations in the American South from the 17th into the 20th century. The complex included everything from the main residence down to the pens for livestock. Until the abolition of slavery, such plantations were generally self-sufficient settlements that relied on the forced labor of enslaved people.

Plantations are an important aspect of the history of the Southern United States, particularly the antebellum era (pre- American Civil War). The mild temperate climate, plentiful rainfall, and fertile soils of the southeastern United States allowed the flourishing of large plantations, where large numbers of enslaved Africans or African Americans were held captive and forced to produce crops to create wealth for a white elite. [2] 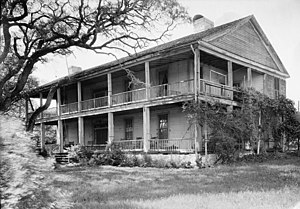 The Seward Plantation is a historic Southern plantation-turned-ranch in Independence, Texas, United States.
Today, as was also true in the past, there is a wide range of opinion as to what differentiated a plantation from a farm. Typically, the focus of a farm was subsistence agriculture. In contrast, the primary focus of a plantation was the production of cash crops, with enough staple food crops produced to feed the population of the estate and the livestock. [3] A common definition of what constituted a plantation is that it typically had 500 to 1,000 acres (2.0 to 4.0 km2) or more of land and produced one or two cash crops for sale. [4] Other scholars have attempted to define it by the number of enslaved persons. [5]