From Wikipedia
https://en.wikipedia.org/wiki/Planning
Regarding the activities required to achieve a desired goal
"Forethought" redirects here. For the defunct software company, see Forethought, Inc.
This article is about the concept. For urban planning, often referred to as simply "planning", see urban planning.

Planning is the process of thinking regarding the activities required to achieve a desired goal. Planning is based on foresight, the fundamental capacity for mental time travel. The evolution of forethought, the capacity to think ahead, is considered to have been a prime mover in human evolution. [1] Planning is a fundamental property of intelligent behavior. It involves the use of logic and imagination to visualise not only a desired end result, but the steps necessary to achieve that result.

Planning according to established principles is a core part of many professional occupations, particularly in fields such as management and business. Once a plan has been developed it is possible to measure and assess progress, efficiency and effectiveness. As circumstances change, plans may need to be modified or even abandoned. 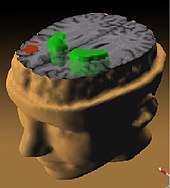 The Striatum; part of the basal ganglia; neural pathways between the striatum and the frontal lobe have been implicated in planning function.

Planning is one of the executive functions of the brain, encompassing the neurological processes involved in the formulation, evaluation and selection of a sequence of thoughts and actions to achieve a desired goal. Various studies utilizing a combination of neuropsychological, neuropharmacological and functional neuroimaging approaches have suggested there is a positive relationship between impaired planning ability and damage to the frontal lobe.

A specific area within the mid-dorsolateral frontal cortex located in the frontal lobe has been implicated as playing an intrinsic role in both cognitive planning and associated executive traits such as working memory.

Disruption of the neural pathways, via various mechanisms such as traumatic brain injury, or the effects of neurodegenerative diseases between this area of the frontal cortex and the basal ganglia, specifically the striatum (cortico-striatal pathway), may disrupt the processes required for normal planning function. [2]

Animation of a four disc version of the Tower of Hanoi.

There are a variety of neuropsychological tests which can be used to measure variance of planning ability between the subject and controls. 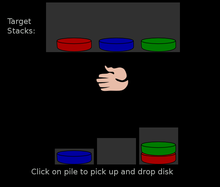 Test participants with damage to the right anterior, and left or right posterior areas of the frontal lobes showed no impairment. The results implicating the left anterior frontal lobes involvement in solving the TOL were supported in concomitant neuroimaging studies which also showed a reduction in regional cerebral blood flow to the left pre-frontal lobe. For the number of moves, a significant negative correlation was observed for the left prefrontal area: i.e. subjects that took more time planning their moves showed greater activation in the left prefrontal area. [7]

In organizations, planning can become a management process, concerned with defining goals for a future direction and determining on the missions and resources to achieve those targets. To meet the goals, managers may develop plans such as a business plan or a marketing plan. Planning always has a purpose. The purpose may involve the achievement of certain goals or targets: efficient use of resources, reducing risk, expanding the organisation and its assets etc.

Public policy planning includes environmental, land use, regional, urban and spatial planning. In many countries, the operation of a town and country planning system is often referred to as "planning" and the professionals which operate the system are known as " planners".

It is a conscious as well as sub-conscious activity. It is "an anticipatory decision making process" that helps in coping with complexities. It is deciding future course of action from amongst alternatives. It is a process that involves making and evaluating each set of interrelated decisions. It is selection of missions, objectives and "translation of knowledge into action." A planned performance brings better results compared to an unplanned one. A manager's job is planning, monitoring and controlling. Planning and goal setting are important traits of an organization. It is done at all levels of the organization. Planning includes the plan, the thought process, action, and implementation. Planning gives more power over the future. Planning is deciding in advance what to do, how to do it, when to do it, and who should do it. This bridges the gap from where the organization is to where it wants to be. The planning function involves establishing goals and arranging them in logical order. An organization that plans well achieves faster goals than one that does not plan before implementation.

Planning is not just a professional activity: it is a feature of everyday life, whether for career advancement, organising an event or even just getting through a busy day.

Opportunism can supplement or replace planning. [9] [10]

Look up planning in Wiktionary, the free dictionary.