From Wikipedia, the free encyclopedia
Science regarding function of organisms or living systems
For the scientific journal, see Physiology (journal). 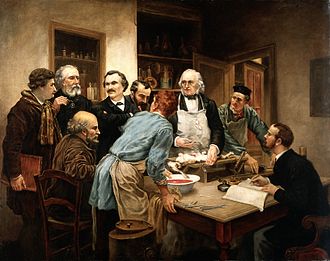 Oil painting depicting Claude Bernard, the father of modern physiology, with his pupils

Central to physiological functioning are biophysical and biochemical processes, homeostatic control mechanisms, and communication between cells. [5] Physiological state is the condition of normal function. In contrast, pathological state refers to abnormal conditions, including human diseases.

The Nobel Prize in Physiology or Medicine is awarded by the Royal Swedish Academy of Sciences for exceptional scientific achievements in physiology related to the field of medicine.

Although there are differences between animal, plant, and microbial cells, the basic physiological functions of cells can be divided into the processes of cell division, cell signaling, cell growth, and cell metabolism.

Human physiology seeks to understand the mechanisms that work to keep the human body alive and functioning, [4] through scientific enquiry into the nature of mechanical, physical, and biochemical functions of humans, their organs, and the cells of which they are composed. The principal level of focus of physiology is at the level of organs and systems within systems. The endocrine and nervous systems play major roles in the reception and transmission of signals that integrate function in animals. Homeostasis is a major aspect with regard to such interactions within plants as well as animals. The biological basis of the study of physiology, integration refers to the overlap of many functions of the systems of the human body, as well as its accompanied form. It is achieved through communication that occurs in a variety of ways, both electrical and chemical. [7]

Changes in physiology can impact the mental functions of individuals. Examples of this would be the effects of certain medications or toxic levels of substances. [8] Change in behavior as a result of these substances is often used to assess the health of individuals. [9] [10]

Much of the foundation of knowledge in human physiology was provided by animal experimentation. Due to the frequent connection between form and function, physiology and anatomy are intrinsically linked and are studied in tandem as part of a medical curriculum. [11]

The study of human physiology as a medical field originates in classical Greece, at the time of Hippocrates (late 5th century BC). [13] Outside of Western tradition, early forms of physiology or anatomy can be reconstructed as having been present at around the same time in China, [14] India [15] and elsewhere. Hippocrates incorporated the theory of humorism, which consisted of four basic substances: earth, water, air and fire. Each substance is known for having a corresponding humor: black bile, phlegm, blood, and yellow bile, respectively. Hippocrates also noted some emotional connections to the four humors, on which Galen would later expand. The critical thinking of Aristotle and his emphasis on the relationship between structure and function marked the beginning of physiology in Ancient Greece. Like Hippocrates, Aristotle took to the humoral theory of disease, which also consisted of four primary qualities in life: hot, cold, wet and dry. [16] Galen ( c. 130–200 AD) was the first to use experiments to probe the functions of the body. Unlike Hippocrates, Galen argued that humoral imbalances can be located in specific organs, including the entire body. [17] His modification of this theory better equipped doctors to make more precise diagnoses. Galen also played off of Hippocrates' idea that emotions were also tied to the humors, and added the notion of temperaments: sanguine corresponds with blood; phlegmatic is tied to phlegm; yellow bile is connected to choleric; and black bile corresponds with melancholy. Galen also saw the human body consisting of three connected systems: the brain and nerves, which are responsible for thoughts and sensations; the heart and arteries, which give life; and the liver and veins, which can be attributed to nutrition and growth. [17] Galen was also the founder of experimental physiology. [18] And for the next 1,400 years, Galenic physiology was a powerful and influential tool in medicine. [17]

Jean Fernel (1497–1558), a French physician, introduced the term "physiology". [19] Galen, Ibn al-Nafis, Michael Servetus, Realdo Colombo, Amato Lusitano and William Harvey, are credited as making important discoveries in the circulation of the blood. [20] Santorio Santorio in 1610s was the first to use a device to measure the pulse rate (the pulsilogium), and a thermoscope to measure temperature. [21]

In 1791 Luigi Galvani described the role of electricity in nerves of dissected frogs. In 1811, César Julien Jean Legallois studied respiration in animal dissection and lesions and found the center of respiration in the medulla oblongata. In the same year, Charles Bell finished work on what would later become known as the Bell-Magendie law, which compared functional differences between dorsal and ventral roots of the spinal cord. In 1824, François Magendie described the sensory roots and produced the first evidence of the cerebellum's role in equilibration to complete the Bell-Magendie law.

In the 1820s, the French physiologist Henri Milne-Edwards introduced the notion of physiological division of labor, which allowed to "compare and study living things as if they were machines created by the industry of man." Inspired in the work of Adam Smith, Milne-Edwards wrote that the "body of all living beings, whether animal or plant, resembles a factory ... where the organs, comparable to workers, work incessantly to produce the phenomena that constitute the life of the individual." In more differentiated organisms, the functional labor could be apportioned between different instruments or systems (called by him as appareils). [22]

In 1858, Joseph Lister studied the cause of blood coagulation and inflammation that resulted after previous injuries and surgical wounds. He later discovered and implemented antiseptics in the operating room, and as a result, decreased death rate from surgery by a substantial amount. [23]

In 1891, Ivan Pavlov performed research on "conditional responses" that involved dogs' saliva production in response to a bell and visual stimuli. [23]

In the 19th century, physiological knowledge began to accumulate at a rapid rate, in particular with the 1838 appearance of the Cell theory of Matthias Schleiden and Theodor Schwann. [26] It radically stated that organisms are made up of units called cells. Claude Bernard's (1813–1878) further discoveries ultimately led to his concept of milieu interieur (internal environment), [27] [28] which would later be taken up and championed as " homeostasis" by American physiologist Walter B. Cannon in 1929. By homeostasis, Cannon meant "the maintenance of steady states in the body and the physiological processes through which they are regulated." [29] In other words, the body's ability to regulate its internal environment. William Beaumont was the first American to utilize the practical application of physiology.

Nineteenth-century physiologists such as Michael Foster, Max Verworn, and Alfred Binet, based on Haeckel's ideas, elaborated what came to be called "general physiology", a unified science of life based on the cell actions, [22] later renamed in the 20th century as cell biology. [30]

In the 20th century, biologists became interested in how organisms other than human beings function, eventually spawning the fields of comparative physiology and ecophysiology. [31] Major figures in these fields include Knut Schmidt-Nielsen and George Bartholomew. Most recently, evolutionary physiology has become a distinct subdiscipline. [32]

In 1920, August Krogh won the Nobel Prize for discovering how, in capillaries, blood flow is regulated. [23]

Recently, there have been intense debates about the vitality of physiology as a discipline (Is it dead or alive?). [33] [34] If physiology is perhaps less visible nowadays than during the golden age of the 19th century, [35] it is in large part because the field has given birth to some of the most active domains of today's biological sciences, such as neuroscience, endocrinology, and immunology. [36] Furthermore, physiology is still often seen as an integrative discipline, which can put together into a coherent framework data coming from various different domains. [34] [37] [38]

Initially, women were largely excluded from official involvement in any physiological society. The American Physiological Society, for example, was founded in 1887 and included only men in its ranks. [39] In 1902, the American Physiological Society elected Ida Hyde as the first female member of the society. [40] Hyde, a representative of the American Association of University Women and a global advocate for gender equality in education, [41] attempted to promote gender equality in every aspect of science and medicine.

Soon thereafter, in 1913, J.S. Haldane proposed that women be allowed to formally join The Physiological Society, which had been founded in 1876. [42] On 3 July 1915, six women were officially admitted: Florence Buchanan, Winifred Cullis, Ruth C. Skelton, Sarah C. M. Sowton, Constance Leetham Terry, and Enid M. Tribe. [43] The centenary of the election of women was celebrated in 2015 with the publication of the book "Women Physiologists: Centenary Celebrations And Beyond For The Physiological Society." ( ISBN  978-0-9933410-0-7)

There are many ways to categorize the subdisciplines of physiology: [53]

Look up physiology in Wiktionary, the free dictionary.