From Wikipedia, the free encyclopedia
Physics applied to chemical systems
Not to be confused with Physiological chemistry or Chemical physics. 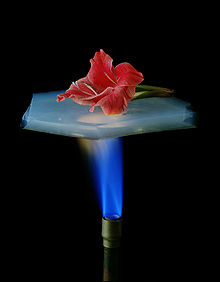 Between the flame and the flower is aerogel, whose synthesis has been aided greatly by physical chemistry.

Physical chemistry is the study of macroscopic and microscopic phenomena in chemical systems in terms of the principles, practices, and concepts of physics such as motion, energy, force, time, thermodynamics, quantum chemistry, statistical mechanics, analytical dynamics and chemical equilibria.

Physical chemistry, in contrast to chemical physics, is predominantly (but not always) a supra-molecular science, as the majority of the principles on which it was founded relate to the bulk rather than the molecular or atomic structure alone (for example, chemical equilibrium and colloids).

Some of the relationships that physical chemistry strives to resolve include the effects of:

The key concepts of physical chemistry are the ways in which pure physics is applied to chemical problems.

One of the key concepts in classical chemistry is that all chemical compounds can be described as groups of atoms bonded together and chemical reactions can be described as the making and breaking of those bonds. Predicting the properties of chemical compounds from a description of atoms and how they bond is one of the major goals of physical chemistry. To describe the atoms and bonds precisely, it is necessary to know both where the nuclei of the atoms are, and how electrons are distributed around them. [2]

Quantum chemistry, a subfield of physical chemistry especially concerned with the application of quantum mechanics to chemical problems, provides tools to determine how strong and what shape bonds are, [2] how nuclei move, and how light can be absorbed or emitted by a chemical compound. [3] Spectroscopy is the related sub-discipline of physical chemistry which is specifically concerned with the interaction of electromagnetic radiation with matter.

Another set of important questions in chemistry concerns what kind of reactions can happen spontaneously and which properties are possible for a given chemical mixture. This is studied in chemical thermodynamics, which sets limits on quantities like how far a reaction can proceed, or how much energy can be converted into work in an internal combustion engine, and which provides links between properties like the thermal expansion coefficient and rate of change of entropy with pressure for a gas or a liquid. [4] It can frequently be used to assess whether a reactor or engine design is feasible, or to check the validity of experimental data. To a limited extent, quasi-equilibrium and non-equilibrium thermodynamics can describe irreversible changes. [5] However, classical thermodynamics is mostly concerned with systems in equilibrium and reversible changes and not what actually does happen, or how fast, away from equilibrium.

Which reactions do occur and how fast is the subject of chemical kinetics, another branch of physical chemistry. A key idea in chemical kinetics is that for reactants to react and form products, most chemical species must go through transition states which are higher in energy than either the reactants or the products and serve as a barrier to reaction. [6] In general, the higher the barrier, the slower the reaction. A second is that most chemical reactions occur as a sequence of elementary reactions, [7] each with its own transition state. Key questions in kinetics include how the rate of reaction depends on temperature and on the concentrations of reactants and catalysts in the reaction mixture, as well as how catalysts and reaction conditions can be engineered to optimize the reaction rate.

The fact that how fast reactions occur can often be specified with just a few concentrations and a temperature, instead of needing to know all the positions and speeds of every molecule in a mixture, is a special case of another key concept in physical chemistry, which is that to the extent an engineer needs to know, everything going on in a mixture of very large numbers (perhaps of the order of the Avogadro constant, 6 x 1023) of particles can often be described by just a few variables like pressure, temperature, and concentration. The precise reasons for this are described in statistical mechanics, [8] a specialty within physical chemistry which is also shared with physics. Statistical mechanics also provides ways to predict the properties we see in everyday life from molecular properties without relying on empirical correlations based on chemical similarities. [5] 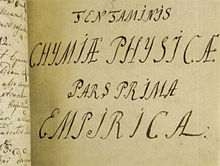 The term "physical chemistry" was coined by Mikhail Lomonosov in 1752, when he presented a lecture course entitled "A Course in True Physical Chemistry" ( Russian: Курс истинной физической химии) before the students of Petersburg University. [9] In the preamble to these lectures he gives the definition: "Physical chemistry is the science that must explain under provisions of physical experiments the reason for what is happening in complex bodies through chemical operations".

Modern physical chemistry originated in the 1860s to 1880s with work on chemical thermodynamics, electrolytes in solutions, chemical kinetics and other subjects. One milestone was the publication in 1876 by Josiah Willard Gibbs of his paper, On the Equilibrium of Heterogeneous Substances. This paper introduced several of the cornerstones of physical chemistry, such as Gibbs energy, chemical potentials, and Gibbs' phase rule. [10]

The first scientific journal specifically in the field of physical chemistry was the German journal, Zeitschrift für Physikalische Chemie, founded in 1887 by Wilhelm Ostwald and Jacobus Henricus van 't Hoff. Together with Svante August Arrhenius, [11] these were the leading figures in physical chemistry in the late 19th century and early 20th century. All three were awarded the Nobel Prize in Chemistry between 1901 and 1909.

Further development in physical chemistry may be attributed to discoveries in nuclear chemistry, especially in isotope separation (before and during World War II), more recent discoveries in astrochemistry, [12] as well as the development of calculation algorithms in the field of "additive physicochemical properties" (practically all physicochemical properties, such as boiling point, critical point, surface tension, vapor pressure, etc.—more than 20 in all—can be precisely calculated from chemical structure alone, even if the chemical molecule remains unsynthesized),[ citation needed] and herein lies the practical importance of contemporary physical chemistry.

Historical journals that covered both chemistry and physics include Annales de chimie et de physique (started in 1789, published under the name given here from 1815 to 1914).

Wikibooks has more on the topic of: Physical chemistry

At Wikiversity, you can learn more and teach others about Physical chemistry at the Department of Physical chemistry
Retrieved from " https://en.wikipedia.org/?title=Physical_chemistry&oldid=1127932355"
Category:
Hidden categories: