From Wikipedia
https://en.wikipedia.org/wiki/Phreatic_eruption
Volcanic eruption caused by an explosion of steam

Look up phreatic in Wiktionary, the free dictionary. 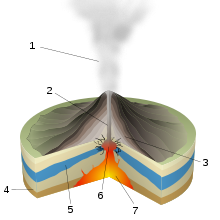 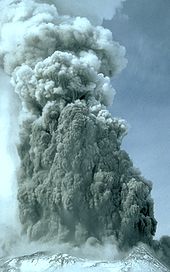 Phreatic eruption at the summit of Mount St. Helens, Washington, in the spring of 1980

A phreatic eruption, also called a phreatic explosion, ultravulcanian eruption or steam-blast eruption, [1] occurs when magma heats ground water or surface water. The extreme temperature of the magma (anywhere from 500 to 1,170 °C (930 to 2,100 °F)) causes near-instantaneous evaporation of water to steam, resulting in an explosion of steam, water, ash, rock, and volcanic bombs. [2] At Mount St. Helens in Washington state, hundreds of steam explosions preceded the 1980 Plinian eruption of the volcano. [2] A less intense geothermal event may result in a mud volcano.[ citation needed]

Phreatic eruptions typically include steam and rock fragments; the inclusion of liquid lava is unusual. The temperature of the fragments can range from cold to incandescent. If molten magma is included, volcanologists classify the event as a phreatomagmatic eruption. These eruptions occasionally create broad, low-relief craters called maars. Phreatic explosions can be accompanied by carbon dioxide or hydrogen sulfide gas-emissions. Carbon dioxide can asphyxiate at sufficient concentration; hydrogen sulfide acts as a broad-spectrum poison. A 1979 phreatic eruption on the island of Java killed 140 people, most of whom were overcome by poisonous gases. [3]