From Wikipedia
https://en.wikipedia.org/wiki/Perspective_(geometry)
Term in geometry 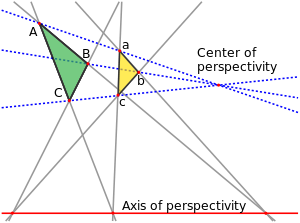 Two figures in a plane are perspective from a point O if the lines joining corresponding points of the figures all meet at O. Dually, the figures are said to be perspective from a line if the points of intersection of corresponding lines all lie on one line. The proper setting for this concept is in projective geometry where there will be no special cases due to parallel lines since all lines meet. Although stated here for figures in a plane, the concept is easily extended to higher dimensions.

to indicate that triangles ABC and abc are perspective. [4]

Desargues' theorem states that, a central couple of triangles is axial. The converse statement, an axial couple of triangles is central, is equivalent (either can be used to prove the other). Desargues' theorem can be proved in the real projective plane, and with suitable modifications for special cases, in the Euclidean plane. Projective planes in which this result can be proved are called Desarguesian planes. 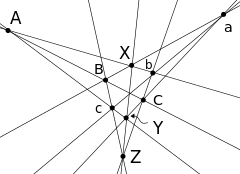 If two triangles are a central couple in at least two different ways (with two different associations of corresponding vertices, and two different centers of perspectivity) then they are perspective in three ways. This is one of the equivalent forms of Pappus's (hexagon) theorem. [5] When this happens, the nine associated points (six triangle vertices and three centers) and nine associated lines (three through each perspective center) form an instance of the Pappus configuration.

The Reye configuration is formed by four quadruply perspective tetrahedra in an analogous way to the Pappus configuration.