In mathematics, the Perrin numbers are defined by the recurrence relation

The sequence of Perrin numbers starts with

The number of different maximal independent sets in an n-vertex cycle graph is counted by the nth Perrin number for n > 1. [1][ page needed]

The generating function of the Perrin sequence is 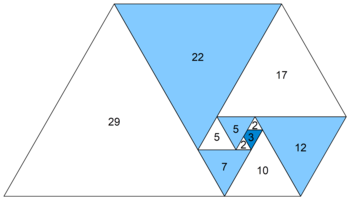 Spiral of equilateral triangles with side lengths which follow the Perrin sequence.

This equation has 3 roots; one real root p (known as the plastic number) and two complex conjugate roots q and r. Given these three roots, the Perrin sequence analogue of the Lucas sequence Binet formula is

Since the magnitudes of the complex roots q and r are both less than 1, the powers of these roots approach 0 for large n. For large n the formula reduces to

; by inverting a matrix we can solve for

and then we can raise them to the kth power and compute the sum.

with the result that, if we have

The number 23 here arises from the discriminant of the defining polynomial of the sequence.

It has been proven that for all primes p, p divides P(p). However, the converse is not true: for some composite numbers n, n may still divide P(n). If n has this property, it is called a "Perrin pseudoprime".

The first few Perrin pseudoprimes are

The question of the existence of Perrin pseudoprimes was considered by Perrin himself, but it was not known whether they existed until Adams and Shanks (1982) discovered the smallest one, 271441 = 5212; the next-smallest is 904631 = 7 x 13 x 9941. There are seventeen of them less than a billion; [3] Jon Grantham has proved [4] that there are infinitely many Perrin pseudoprimes.

Adams and Shanks (1982) noted that primes also meet the condition that P(-p) = -1 mod p. Composites where both properties hold are called "restricted Perrin pseudoprimes" (sequence A018187 in the OEIS). Further conditions can be applied using the six element signature of n which must be one of three forms (e.g. OEIS:  A275612 and OEIS:  A275613).

While Perrin pseudoprimes are rare, they have significant overlap with Fermat pseudoprimes. This contrasts with the Lucas pseudoprimes which are anti-correlated. The latter condition is exploited to yield the popular, efficient, and more effective BPSW test which has no known pseudoprimes, and the smallest is known to be greater than 264.

For these Perrin primes, the index n of P(n) is