From Wikipedia, the free encyclopedia
(Redirected from Perihelion and aphelion)
Either of two extreme points in a celestial object's orbit
Several terms redirect here. For other uses, see Apogee (disambiguation) and Perigee (disambiguation).
Not to be confused with Apse or Aspis. 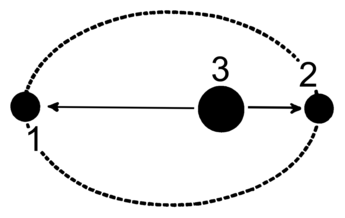 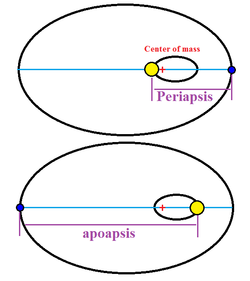 The two-body system of interacting elliptic orbits: The smaller, satellite body (blue) orbits the primary body (yellow); both are in elliptic orbits around their common center of mass (or barycenter), (red +).
∗Periapsis and apoapsis as distances: The smallest and largest distances between the orbiter and its host body. 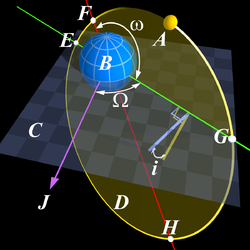 An apsis (from Ancient Greek ἁψίς (hapsís) 'arch, vault'; pl. apsides /ˈæpsɪˌdiːz/ AP-sih-deez) [1] [2] is the farthest or nearest point in the orbit of a planetary body about its primary body. For example, the apsides of the Sun are called the aphelion and perihelion.

There are two apsides in any elliptic orbit. The name for each apsis is created from the prefixes ap-, apo- (from ἀπ(ό), (ap(o)-) 'away from'), or peri- (from περί (peri-) 'near'), each referring to the farthest and closest point to the primary body the affixing necessary suffix that describes the primary body in the orbit. In this case, the suffix for Earth is -gee, so the apsides' names are apogee and perigee. For the Sun, its suffix is -helion, so the names are aphelion and perihelion.

According to Newton's laws of motion, all periodic orbits are ellipses. The barycenter of the two bodies may lie well within the bigger body—e.g., the Earth–Moon barycenter is about 75% of the way from Earth's center to its surface. If, compared to the larger mass, the smaller mass is negligible (e.g., for satellites), then the orbital parameters are independent of the smaller mass.

When used as a suffix—that is, -apsis—the term can refer to the two distances from the primary body to the orbiting body when the latter is located: 1) at the periapsis point, or 2) at the apoapsis point (compare both graphics, second figure). The line of apsides denotes the distance of the line that joins the nearest and farthest points across an orbit; it also refers simply to the extreme range of an object orbiting a host body (see top figure; see third figure).

In orbital mechanics, the apsides technically refer to the distance measured between the center of mass of the central body and the center of mass of the orbiting body. However, in the case of a spacecraft, the terms are commonly used to refer to the orbital altitude of the spacecraft above the surface of the central body (assuming a constant, standard reference radius).

The words "pericenter" and "apocenter" are often seen, although periapsis/apoapsis are preferred in technical usage.

The words perihelion and aphelion were coined by Johannes Kepler [6] to describe the orbital motions of the planets around the Sun. The words are formed from the prefixes peri- (Greek: περί, near) and apo- (Greek: ἀπό, away from), affixed to the Greek word for the sun, (ἥλιος, or hēlíos). [3]

Various related terms are used for other celestial objects. The suffixes -gee, -helion, -astron and -galacticon are frequently used in the astronomical literature when referring to the Earth, Sun, stars, and the galactic center respectively. The suffix -jove is occasionally used for Jupiter, but -saturnium has very rarely been used in the last 50 years for Saturn. The -gee form is also used as a generic closest-approach-to "any planet" term—instead of applying it only to Earth.

During the Apollo program, the terms pericynthion and apocynthion were used when referring to orbiting the Moon; they reference Cynthia, an alternative name for the Greek Moon goddess Artemis. [7] More recently, during the Artemis program, the terms perilune and apolune have been used. [8] Regarding black holes, the terms perimelasma and apomelasma (from a Greek root) were used by physicist and science-fiction author Geoffrey A. Landis in a story published in 1998, [9] thus appearing before perinigricon and aponigricon (from Latin) in the scientific literature in 2002, [10] and before peribothron (from Greek bothros, meaning "hole" or "pit") in 2015. [11]

The suffixes shown below may be added to prefixes peri- or apo- to form unique names of apsides for the orbiting bodies of the indicated host/ (primary) system. However, only for the Earth, Moon and Sun systems are the unique suffixes commonly used. Exoplanet studies commonly use -astron, but typically, for other host systems the generic suffix, -apsis, is used instead. [12][ failed verification] 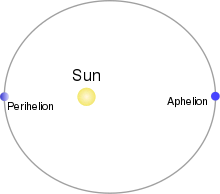 Diagram of a body's direct orbit around the Sun with its nearest (perihelion) and farthest (aphelion) points.

The perihelion (q) and aphelion (Q) are the nearest and farthest points respectively of a body's direct orbit around the Sun.

Comparing osculating elements at a specific epoch to effectively those at a different epoch will generate differences. The time-of-perihelion-passage as one of six osculating elements is not an exact prediction (other than for a generic two-body model) of the actual minimum distance to the Sun using the full dynamical model. Precise predictions of perihelion passage require numerical integration.

The two images below show the orbits, orbital nodes, and positions of perihelion (q) and aphelion (Q) for the planets of the Solar System [15] as seen from above the northern pole of Earth's ecliptic plane, which is coplanar with Earth's orbital plane. The planets travel counterclockwise around the Sun and for each planet, the blue part of their orbit travels north of the ecliptic plane, the pink part travels south, and dots mark perihelion (green) and aphelion (orange).

The first image (below-left) features the inner planets, situated outward from the Sun as Mercury, Venus, Earth, and Mars. The reference Earth-orbit is colored yellow and represents the orbital plane of reference. At the time of vernal equinox, the Earth is at the bottom of the figure. The second image (below-right) shows the outer planets, being Jupiter, Saturn, Uranus, and Neptune.

The orbital nodes are the two end points of the "line of nodes" where a planet's tilted orbit intersects the plane of reference; [16] here they may be 'seen' as the points where the blue section of an orbit meets the pink.

The chart shows the extreme range—from the closest approach (perihelion) to farthest point (aphelion)—of several orbiting celestial bodies of the Solar System: the planets, the known dwarf planets, including Ceres, and Halley's Comet. The length of the horizontal bars correspond to the extreme range of the orbit of the indicated body around the Sun. These extreme distances (between perihelion and aphelion) are the lines of apsides of the orbits of various objects around a host body.

The dates of perihelion and aphelion change over time due to precession and other orbital factors, which follow cyclical patterns known as Milankovitch cycles. In the short term, such dates can vary up to 2 days from one year to another. [17] This significant variation is due to the presence of the Moon: while the Earth–Moon barycenter is moving on a stable orbit around the Sun, the position of the Earth's center which is on average about 4,700 kilometres (2,900 mi) from the barycenter, could be shifted in any direction from it—and this affects the timing of the actual closest approach between the Sun's and the Earth's centers (which in turn defines the timing of perihelion in a given year). [18]

Because of the increased distance at aphelion, only 93.55% of the radiation from the Sun falls on a given area of Earth's surface as does at perihelion, but this does not account for the seasons, which result instead from the tilt of Earth's axis of 23.4° away from perpendicular to the plane of Earth's orbit. [19] Indeed, at both perihelion and aphelion it is summer in one hemisphere while it is winter in the other one. Winter falls on the hemisphere where sunlight strikes least directly, and summer falls where sunlight strikes most directly, regardless of the Earth's distance from the Sun.

Perihelion and aphelion do however have an indirect effect on the seasons: because Earth's orbital speed is minimum at aphelion and maximum at perihelion, the planet takes longer to orbit from June solstice to September equinox than it does from December solstice to March equinox. Therefore, summer in the northern hemisphere lasts slightly longer (93 days) than summer in the southern hemisphere (89 days). [21]

For the orbit of the Earth around the Sun, the time of apsis is often expressed in terms of a time relative to seasons, since this determines the contribution of the elliptical orbit to seasonal variations. The variation of the seasons is primarily controlled by the annual cycle of the elevation angle of the Sun, which is a result of the tilt of the axis of the Earth measured from the plane of the ecliptic. The Earth's eccentricity and other orbital elements are not constant, but vary slowly due to the perturbing effects of the planets and other objects in the solar system (Milankovitch cycles).

On a very long time scale, the dates of the perihelion and of the aphelion progress through the seasons, and they make one complete cycle in 22,000 to 26,000 years. There is a corresponding movement of the position of the stars as seen from Earth, called the apsidal precession. (This is closely related to the precession of the axes.) The dates and times of the perihelions and aphelions for several past and future years are listed in the following table: [23]

The following table shows the distances of the planets and dwarf planets from the Sun at their perihelion and aphelion. [24]

These formulae characterize the pericenter and apocenter of an orbit:

Note that for conversion from heights above the surface to distances between an orbit and its primary, the radius of the central body has to be added, and conversely.

The geometric mean of the two limiting speeds is

Numerical integration shows dwarf planet Eris will come to perihelion around December 2257. [29] Using an epoch of 2021, which is 236 years early, less accurately shows Eris coming to perihelion in 2260. [30]

Trans-Neptunian objects discovered when 80+ AU from the Sun need dozens of observations over multiple years to well constrain their orbits because they move very slowly against the background stars. Due to statistics of small numbers, trans-Neptunian objects such as 2015 TH367 with only 8 observations over an observation arc of 1 year that have not or will not come to perihelion for roughly 100 years can have a 1-sigma uncertainty of 74.6 years (27,260 days) in the perihelion date. [33]