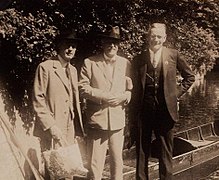 Lowe was born at Stamford, Lincolnshire and studied medicine at Jesus College, Cambridge. [1] He served as a civil surgeon in the Second Boer War, and it was whilst in South Africa that he became interested in ornithology. On his return he became private physician to Sir Frederick Johnstone, 8th Baronet. During World War One he served in the Royal Army Medical Corps; he was Officer in Command on Princess Christian Ambulance Train for which he was awarded the OBE in 1920.

Lowe worked with Dorothea Bate on fossil ostriches in China. [2]

In November 1919 he succeeded William Robert Ogilvie-Grant as Curator of Birds at the Natural History Museum, retiring on his sixty-fifth birthday in 1935. He was succeeded by Norman Boyd Kinnear.