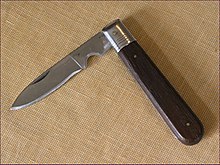 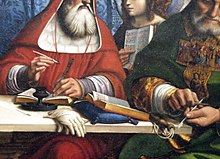 Using a penknife to cut a pen

Originally, penknives were used for thinning and pointing quills (cf. penna, Latin for feather) to prepare them for use as dip pens and, later, for repairing or re-pointing the nib. [1] A penknife might also be used to sharpen a pencil, [3] prior to the invention of the pencil sharpener. In the mid-1800s, penknives were necessary to slice the uncut edges of newspapers and books. [4]

A penknife did not necessarily have a folding blade, but might resemble a scalpel or chisel by having a short, fixed blade at the end of a long handle. One popular (but incorrect) folk etymology makes an association between the size of a penknife and that of a small ballpoint pen.

During the 20th century there has been a proliferation of multi-function knives with assorted blades and gadgets, including; awls, reamers, scissors, nail files, corkscrews, tweezers, toothpicks, and so on. The tradition continues with the incorporation of modern devices such as ballpoint pens, LED torches/flashlights, and USB flash drives. [5]

The most famous example of a multi-function penknife is the Swiss Army knife, some versions of which number dozens of functions and are really more of a folding multi-tool, incorporating a blade or two, than a penknife with extras. [5]

A larger folding knife, especially one in which the blade locks into place, is often called a claspknife. [5]