From Wikipedia, the free encyclopedia
Natural number used to approximate √2
Not to be confused with Bell number.

Both the Pell numbers and the companion Pell numbers may be calculated by means of a recurrence relation similar to that for the Fibonacci numbers, and both sequences of numbers grow exponentially, proportionally to powers of the silver ratio 1 + √2. As well as being used to approximate the square root of two, Pell numbers can be used to find square triangular numbers, to construct integer approximations to the right isosceles triangle, and to solve certain combinatorial enumeration problems. [1]

As with Pell's equation, the name of the Pell numbers stems from Leonhard Euler's mistaken attribution of the equation and the numbers derived from it to John Pell. The Pell–Lucas numbers are also named after Édouard Lucas, who studied sequences defined by recurrences of this type; the Pell and companion Pell numbers are Lucas sequences.

The Pell numbers are defined by the recurrence relation:

For large values of n, the (1 + √2)n term dominates this expression, so the Pell numbers are approximately proportional to powers of the silver ratio 1 + √2, analogous to the growth rate of Fibonacci numbers as powers of the golden ratio.

A third definition is possible, from the matrix formula

Many identities can be derived or proven from these definitions; for instance an identity analogous to Cassini's identity for Fibonacci numbers,

Approximation to the square root of two 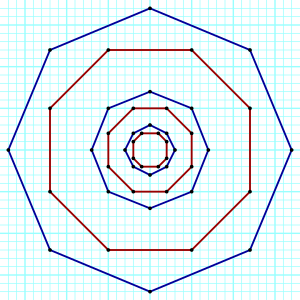 Rational approximations to regular octagons, with coordinates derived from the Pell numbers.

Pell numbers arise historically and most notably in the rational approximation to √2. If two large integers x and y form a solution to the Pell equation

of this type was known to Indian mathematicians in the third or fourth century B.C. [3] The Greek mathematicians of the fifth century B.C. also knew of this sequence of approximations: [4] Plato refers to the numerators as rational diameters. [5] In the 2nd century CE Theon of Smyrna used the term the side and diameter numbers to describe the denominators and numerators of this sequence. [6]

These approximations can be derived from the continued fraction expansion of

Truncating this expansion to any number of terms produces one of the Pell-number-based approximations in this sequence; for instance,

As Knuth (1994) describes, the fact that Pell numbers approximate √2 allows them to be used for accurate rational approximations to a regular octagon with vertex coordinates (± Pi, ± Pi +1) and (± Pi +1, ± Pi ). All vertices are equally distant from the origin, and form nearly uniform angles around the origin. Alternatively, the points

form approximate octagons in which the vertices are nearly equally distant from the origin and form uniform angles.

A Pell prime is a Pell number that is prime. The first few Pell primes are

However, despite having so few squares or other powers, Pell numbers have a close connection to square triangular numbers. [8] Specifically, these numbers arise from the following identity of Pell numbers:

Falcón and Díaz-Barrero (2006) proved another identity relating Pell numbers to squares and showing that the sum of the Pell numbers up to P4n +1 is always a square:

are known as the Newman–Shanks–Williams (NSW) numbers. 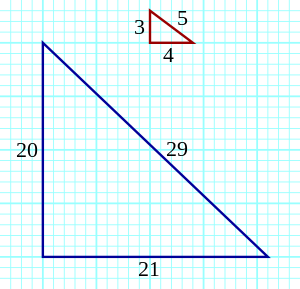 The sequence of Pythagorean triples formed in this way is

Like the relationship between Fibonacci numbers and Lucas numbers,

for all natural numbers n.

These numbers are all even; each such number is twice the numerator in one of the rational approximations to

Like the Lucas sequence, if a Pell–Lucas number 1/2Qn is prime, it is necessary that n be either prime or a power of 2. The Pell–Lucas primes are

For these n are

The coefficients are the half-companion Pell numbers Hn and the Pell numbers Pn which are the (non-negative) solutions to H  2 − 2P  2 = ±1. A square triangular number is a number

which is both the t-th triangular number and the s-th square number. A near-isosceles Pythagorean triple is an integer solution to a2 + b2 = c2 where a + 1 = b.

The next table shows that splitting the odd number Hn into nearly equal halves gives a square triangular number when n is even and a near isosceles Pythagorean triple when n is odd. All solutions arise in this manner.

The half-companion Pell numbers Hn and the Pell numbers Pn can be derived in a number of easily equivalent ways.

From this it follows that there are closed forms:

The difference between Hn and Pn√2 is

which goes rapidly to zero. So

is extremely close to 2Hn.

The best we can achieve is either

so that these differences, starting with H  2
0 − 2P  2
0 = 1, are alternately 1 and −1. Then note that every positive solution comes in this way from a solution with smaller integers since

Observe that t and t + 1 are relatively prime, so that t (t + 1)/2 = s2 happens exactly when they are adjacent integers, one a square H  2 and the other twice a square 2P  2. Since we know all solutions of that equation, we also have

This alternate expression is seen in the next table.