From Wikipedia
https://en.wikipedia.org/wiki/Pelagic_zone
Unobstructed water in the body of the sea that is neither close to the surface nor to the sea floor
"Pelagic" and "Open sea" redirect here. For the writer, see Vasa Pelagić. For the marketplace, see OpenSea. For ocean not controlled by any sovereign territory, see International waters.

The pelagic zone consists of the water column of the open ocean, and can be further divided into regions by depth (as illustrated on the right). The word pelagic is derived from Ancient Greek πέλαγος (pélagos) 'open sea'. [1] The pelagic zone can be thought of as an imaginary cylinder or water column between the surface of the sea and the bottom. Conditions in the water column change with depth: pressure increases; temperature and light decrease; salinity, oxygen, micronutrients (such as iron, magnesium and calcium) all change.

Marine life is affected by bathymetry (underwater topography) such as the seafloor, shoreline, or a submarine seamount, as well as by proximity to the boundary between the ocean and the atmosphere at the ocean surface, which brings light for photosynthesis, predation from above, and wind stirring up waves and setting currents in motion. The pelagic zone refers to the open, free waters away from the shore, where marine life can swim freely in any direction unhindered by topographical constraints.

The oceanic zone is the deep open ocean beyond the continental shelf, which contrasts with the inshore waters near the coast, such as in estuaries or on the continental shelf. Waters in the oceanic zone plunge to the depths of the abyssopelagic and further to the hadopelagic. Coastal waters are generally the relatively shallow epipelagic. Altogether, the pelagic zone occupies 1,330 million km3 (320 million mi3) with a mean depth of 3.68 km (2.29 mi) and maximum depth of 11 km (6.8 mi). [2] [3] [4] Pelagic life decreases as depth increases.

The pelagic zone contrasts with the benthic and demersal zones at the bottom of the sea. The benthic zone is the ecological region at the very bottom, including the sediment surface and some subsurface layers. Marine organisms such as clams and crabs living in this zone are called benthos. Just above the benthic zone is the demersal zone. Demersal fish can be divided into benthic fish, which are denser than water and rest on the bottom, and benthopelagic fish, which swim just above the bottom. Demersal fish are also known as bottom feeders and groundfish.

The pelagic zone is subdivided into five vertical regions. From the top down, these are:

The illuminated zone at the surface of the sea with sufficient light for photosynthesis. Nearly all primary production in the ocean occurs here, and marine life is concentrated in this zone, including plankton, floating seaweed, jellyfish, tuna, many sharks and dolphins.[ citation needed]

The most abundant organisms thriving into the mesopelagic zone are heterotrophic bacteria. [5] Animals living in this zone include swordfish, squid, wolffish and some species of cuttlefish. Many organisms living here are bioluminescent. [6] Some mesopelagic creatures rise to the epipelagic zone at night to feed. [6]

The name stems from Ancient Greek βαθύς 'deep'. The ocean is pitch black at this depth apart from occasional bioluminescent organisms, such as anglerfish. No plants live here. Most animals survive on detritus known as " marine snow" falling from the zones above or, like the marine hatchetfish, by preying on other inhabitants of this zone. Other examples of this zone's inhabitants are giant squid, smaller squid and the grimpoteuthis or "dumbo octopus". The giant squid is hunted here by deep-diving sperm whales.[ citation needed]

The name is derived from Ancient Greek ἄβυσσος 'bottomless' - a holdover from times when the deep ocean was believed to indeed be bottomless. Among the very few creatures living in the cold temperatures, high pressures and complete darkness here are several species of squid; echinoderms including the basket star, swimming cucumber, and the sea pig; and marine arthropods including the sea spider. Many species at these depths are transparent and eyeless. [6] 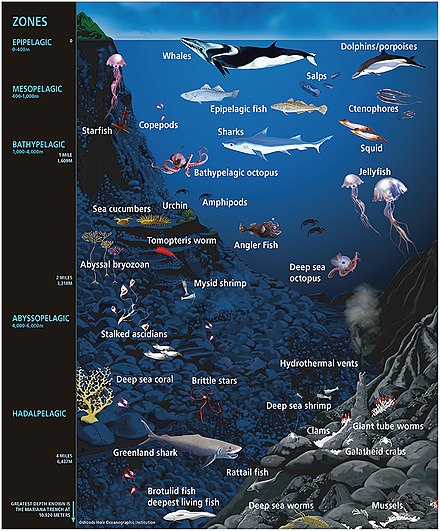 Some representative ocean animals (not drawn to scale) within their approximate depth-defined ecological habitats. Marine microorganisms also exist on the surfaces and within the tissues and organs of the diverse life inhabiting the ocean, across all ocean habitats. The animals rooted to or living on the ocean floor are not pelagic but are benthic animals. [7]

The pelagic ecosystem is based on phytoplankton. Phytoplankton manufacture their own food using a process of photosynthesis. Because they need sunlight, they inhabit the upper, sunlit epipelagic zone, which includes the coastal or neritic zone. Biodiversity diminishes markedly in the deeper zones below the epipelagic zone as dissolved oxygen diminishes, water pressure increases, temperatures become colder, food sources become scarce, and light diminishes and finally disappears. [8]

Pelamis platura, the pelagic sea snake, is the only one of the 65 species of marine snakes to spend its entire life in the pelagic zone. It bears live young at sea and is helpless on land. The species sometimes forms aggregations of thousands along slicks in surface waters. The pelagic sea snake is the world's most widely distributed snake species.[ citation needed]

The pelagic wandering albatross (Diomedea exulans) ranges over huge areas of ocean and can circle the globe.

Many species of sea turtles spend the first years of their lives in the pelagic zone, moving closer to shore as they reach maturity.[ citation needed]

Pelagic birds, also called oceanic birds or seabirds, live on open seas and oceans rather than inland or around more restricted waters such as rivers and lakes. Pelagic birds feed on planktonic crustaceans, squid and forage fish. Examples are the Atlantic puffin, macaroni penguins, sooty terns, shearwaters, and Procellariiformes such as the albatross, Procellariidae and petrels.[ citation needed]