From Wikipedia, the free encyclopedia
Peak consumption or production of coal by a human community

Peak coal is the peak consumption or production of coal by a human community. Global coal consumption peaked in 2013, and had dropped slightly by the end of the 2010s. [1] [2] The peak of coal's share in the global energy mix was in 2008, when coal accounted for 30% of global energy production. [1] The decline in coal use is largely driven by consumption declines in the United States and Europe, as well as developed economies in Asia. [1] In 2019, production increases in countries such as China, Indonesia, India, Russia and Australia compensated for the falls in the United States and Europe. [2] However, coal's structural decline continued in the 2020s. [3]

Peak coal can be driven by peak demand or peak supply. Historically, it was widely believed that the supply-side would eventually drive peak coal due to the depletion of coal reserves. However, since the increasing global efforts to limit climate change, peak coal has been driven by demand, which has stayed below the 2013 peak consumption. [1] This is due in large part to the rapid expansion of natural gas and renewable energy. [1] Many countries have pledged to phase-out coal, despite estimates that project coal reserves to have the capacity to last for centuries at current consumption levels. In some countries[ which?] coal consumption may still increase in the early 2020s. [4] 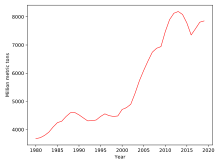 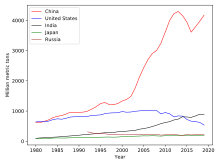 Although reserves of coal remain abundant, consumption of coal has declined in many countries. In 2016, Scotland closed its last coal-fired power plant, [5] accommodated by an increase in nuclear power generation (to 42.8% of 2016 output). Scottish renewable energy comprised 42.9% of 2016 output. [6] The term "peak coal" is now used primarily to refer to a peak and subsequent decline in global and national coal consumption. In 2016 experts estimated that China, the world's largest coal consumer, reached peak coal in 2013, and that the world may have passed peak coal. [7] However, in 2017, for the first time in four years, demand for coal rose. [8] 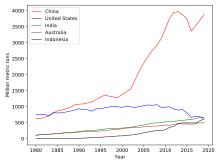 China is the largest consumer and mines the most out of the countries that produce coal. In 2019 the IEA predicted that coal use would plateau in 2022, [10] whereas UBS bank forecasts 2023. [11] In 2020 China set a carbon neutral target date. [12] [13] In 2021, the government ordered all coal mines to operate at full capacity at all times, including holidays; approved new mines, and eliminated restrictions on coal imports. [14]

As of 2020, over half of the world's coal-generated electricity was produced in China. [15]

Over the years, the average energy content per ton of coal mined in the US has declined as mining shifts to coals of lower rank. Although the tonnage of coal mined in the United States reached its latest peak in 2008, the peak in terms of coal energy content occurred in 1998, at 598 Millions of metric tons of oil equivalent (Mtoe); by 2005 this had fallen to 576 Mtoe, or about 4% lower. [24] [25]

Australia has substantial coal resources, mostly brown coal. It is responsible for almost 40% of global coal exports worldwide, and much of its current electricity is generated from coal-fired power stations. There are tentative plans to very slowly phase out coal electricity generation in favor of gas, although these plans are still a topic of much debate in Australian politics. Groups such as the Australian Greens, suggest that coal be left in the ground to avoid its potential combustion either in Australia or in importer nations.

Because most of the country's coal is exported it is vulnerable to reductions by importing countries such as China. [26]

According to the Earth Watch Group, Canadian coal extraction peaked in 1997. [24]

In 2010, Tadeusz Patzek (chairman of the Department of Petroleum and Geosystems Engineering at the University of Texas at Austin) and Greg Croft, predicted that coal production would peak in 2011 or shortly thereafter, and decline so quickly as to nearly eliminate the contribution of coal to climate change. Patzek said: "Our ability to produce this resource at 8 billion tons per year, in my mind, is a dream," [32] However, world coal production exceeded 8 billion tons per year in 2012 (8.2 billion), 2013 (8.19 billion), and 2014 (8.085 billion). [33]

M. King Hubbert's 1956 projections from the world extraction curve estimated that world coal production would peak at approximately six billion metric tons per year at about the year 2150. [34]

Coal: Resources and Future Production, [24] published in 2007 by the Energy Watch Group (EWG) found that global coal extraction could peak in as few as 15 years. [35] However, the graphs in their 2013 report show a peak in 2020. [36] Reporting on this, Richard Heinberg also noted that the date of peak annual energetic extraction from coal would likely come earlier than the date of peak in quantity of coal (tons per year) extracted as the most energy-dense types of coal had been mined most extensively. [37]

The Future of Coal by B. Kavalov and S. D. Peteves of the Institute for Energy (IFE), prepared for European Commission Joint Research Centre, reached conclusions similar to those of Energy Watch Group, and stated that "coal might not be so abundant, widely available and reliable as an energy source in the future". [35] Kavalov and Peteves did not attempt to forecast a peak in extraction.

In 2011 the US Energy Information Administration projected world coal consumption to increase through 2035. [38]

According to M. King Hubbert's Hubbert peak theory, peak coal is the point at which the maximum global coal production rate is reached, after which, according to the theory, the rate of production will enter a terminal decline. Coal is a fossil fuel formed from plant matter over the course of millions of years. It is a finite resource and thus considered to be a non-renewable energy source.

Hubbert concluded that each oil region and nation has a bell-shaped depletion curve. [18] However, this question was originally raised by William Stanley Jevons in his book The Coal Question in 1865.

Hubbert noted that United States coal extraction grew exponentially at a steady 6.6% per year from 1850 to 1910. Then the growth leveled off. He concluded that no finite resource could sustain exponential growth. At some point, the rate of extraction will have to peak and then decline until the resource is exhausted. He theorized that extraction rate plotted versus time would show a bell-shaped curve, declining as rapidly as it had risen. [40] Hubbert used his observation of the US coal extraction to predict the behavior of peak oil.

The Hubbert linearization using yearly production rates has weaknesses for peak coal calculation, as the signal-to-noise ratio is inferior with coal mining data compared to oil extraction. As a consequence, Rutledge [41] uses cumulative production for linearization. By this method the estimated ultimate recovery results in a stable fit for active coal regions. The ultimate production for world coal is estimated to be 680 Gt, of which 309 Gt have already been produced. However, in 2015 the World Coal Association reported that two different estimates of coal reserves remaining were 968 Gt (IEA/BGR) and 891 Gt (BP/WEC). [42]