From Wikipedia
https://en.wikipedia.org/wiki/Passerine
Any bird of the order Passeriformes, sometimes known as perching birds or songbirds

A passerine ( /ˈpæsəraɪn/) is any bird of the order Passeriformes ( /ˈpæsərɪfɔːrmiːz/; from Latin passer 'sparrow' and formis '-shaped'), which includes more than half of all bird species. Sometimes known as perching birds or songbirds, passerines are distinguished from other orders of birds by the arrangement of their toes (three pointing forward and one back), which facilitates perching.

With more than 140 families and some 6,500 identified species, [1] Passeriformes is the largest order of birds and among the most diverse orders of terrestrial vertebrates, representing 60% of birds. [2] [3] Passerines are divided into three suborders: Acanthisitti (New Zealand wrens), Tyranni (suboscines), and Passeri (oscines). [4] [5] The passerines contain several groups of brood parasites such as the viduas, cuckoo-finches, and the cowbirds. Most passerines are omnivorous, while the shrikes are carnivorous.

The terms "passerine" and "Passeriformes" are derived from the scientific name of the house sparrow, Passer domesticus, and ultimately from the Latin term passer, which refers to sparrows and similar small birds.

The order is divided into three suborders, Tyranni (suboscines), Passeri (oscines), and the basal Acanthisitti. [6] Oscines have the best control of their syrinx muscles among birds, producing a wide range of songs and other vocalizations, though some of them, such as the crows, do not sound musical to human beings. Some, such as the lyrebird, are accomplished imitators. [7] The New Zealand wrens are tiny birds restricted to New Zealand, at least in modern times; they were long placed in Passeri. 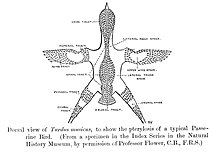 Pterylosis or the feather tracts in a typical passerine

Most passerines are smaller than typical members of other avian orders. The heaviest and altogether largest passerines are the thick-billed raven [8] and the larger races of common raven, each exceeding 1.5 kg (3.3 lb) and 70 cm (28 in). The superb lyrebird and some birds-of-paradise, due to very long tails or tail coverts, are longer overall. The smallest passerine is the short-tailed pygmy tyrant, at 6.5 cm (2.6 in) and 4.2 g (0.15 oz). [9]

The foot of a passerine has three toes directed forward and one toe directed backward, called anisodactyl arrangement, and the hind toe ( hallux) joins the leg at approximately the same level as the front toes. This arrangement enables passerine birds to easily perch upright on branches. The toes have no webbing or joining, but in some cotingas, the second and third toes are united at their basal third.

The leg of passerine birds contains an additional special adaptation for perching. A tendon in the rear of the leg running from the underside of the toes to the muscle behind the tibiotarsus will automatically be pulled and tighten when the leg bends, causing the foot to curl and become stiff when the bird lands on a branch. This enables passerines to sleep while perching without falling off. [10] [11]

Most passerine birds have 12 tail feathers but the superb lyrebird has 16, [12] and several spinetails in the family Furnariidae have 10, 8, or even 6, as is the case of Des Murs's wiretail. Species adapted to tree trunk climbing such as woodcreeper and treecreepers have stiff tail feathers that are used as props during climbing. Extremely long tails used as sexual ornaments are shown by species in different families. A well-known example is the long-tailed widowbird.

The chicks of passerines are altricial: blind, featherless, and helpless when hatched from their eggs. Hence, the chicks require extensive parental care. Most passerines lay colored eggs, in contrast with nonpasserines, most of whose eggs are white except in some ground-nesting groups such as Charadriiformes and nightjars, where camouflage is necessary, and in some parasitic cuckoos, which match the passerine host's egg. The vinous-throated parrotbill has two egg colors, white and blue, to deter the brood parasitic common cuckoo.

Clutches vary considerably in size: some larger passerines of Australia such as lyrebirds and scrub-robins lay only a single egg, most smaller passerines in warmer climates lay between two and five, while in the higher latitudes of the Northern Hemisphere, hole-nesting species like tits can lay up to a dozen and other species around five or six. The family Viduidae do not build their own nests, instead, they lay eggs in other birds' nests.

The evolutionary history of the passerine families and the relationships among them remained rather mysterious until the late 20th century. In many cases, passerine families were grouped together on the basis of morphological similarities that, it is now believed, are the result of convergent evolution, not a close genetic relationship. For example, the wrens of the Americas and Eurasia, those of Australia, and those of New Zealand, look superficially similar and behave in similar ways, yet belong to three far-flung branches of the passerine family tree; they are as unrelated as it is possible to be while remaining Passeriformes. [a]

Advances in molecular biology and improved paleobiogeographical data gradually are revealing a clearer picture of passerine origins and evolution that reconciles molecular affinities, the constraints of morphology and the specifics of the fossil record. [14] [15] The first passerines are now thought to have evolved in Gondwana (in the Southern Hemisphere) in the late Paleocene or early Eocene, around 50 million years ago. [5] [15]

The initial split was between the New Zealand wrens ( Acanthisittidae) and all other passerines ( Eupasserine), and the second split involved the Tyranni (suboscines) and the Passeri (oscines or songbirds). [3] A rupture of the Gondwanan continent caused the core split of the Eupasseres, which were divided into these groups, one in Western Gondwana (Tyranni) and the other in Eastern Gondwana (Passeri). [2] Passeri experienced a great radiation of forms out of the Australian continent. A major branch of the Passeri, parvorder Passerida, expanded deep into Eurasia and Africa, where a further explosive radiation of new lineages occurred. [15] This eventually led to three major Passerida lineages comprising about 4,000 species, which in addition to the Corvida and numerous minor lineages make up songbird diversity today. Extensive biogeographical mixing happens, with northern forms returning to the south, southern forms moving north, and so on. [3]

Perching bird osteology, especially of the limb bones, is rather diagnostic. [16] [17] [18] However, the early fossil record is poor because the first Passeriformes were relatively small, and their delicate bones did not preserve well. Queensland Museum specimens F20688 ( carpometacarpus) and F24685 ( tibiotarsus) from Murgon, Queensland, are fossil bone fragments initially assigned to Passeriformes. [16] However, the material is too fragmentary and their affinities have been questioned. [19] Several more recent fossils from the Oligocene of Europe, such as Wieslochia, Jamna, Resoviaornis and Crosnoornis, [20] are more complete and definitely represent early passeriforms, although their exact position in the evolutionary tree is not known.

From the Bathans Formation at the Manuherikia River in Otago, New Zealand, MNZ S42815 (a distal right tarsometatarsus of a tui-sized bird) and several bones of at least one species of saddleback-sized bird have recently been described. These date from the Early to Middle Miocene ( Awamoan to Lillburnian, 19–16 mya). [21]

In Europe, perching birds are not too uncommon in the fossil record from the Oligocene onward, but most are too fragmentary for a more definite placement:

That suboscines expanded much beyond their region of origin is proven by several fossil from Germany such as a broadbill ( Eurylaimidae) humerus fragment from the Early Miocene (roughly 20 mya) of Wintershof, Germany, the Late Oligocene carpometacarpus from France listed above, and Wieslochia, among others. [17] [15] Extant Passeri super-families were quite distinct by that time and are known since about 12–13 mya when modern genera were present in the corvoidean and basal songbirds. The modern diversity of Passerida genera is known mostly from the Late Miocene onwards and into the Pliocene (about 10–2 mya). Pleistocene and early Holocene lagerstätten (<1.8 mya) yield numerous extant species, and many yield almost nothing but extant species or their chronospecies and paleosubspecies.

In the Americas, the fossil record is more scant before the Pleistocene, from which several still-existing suboscine families are documented. Apart from the indeterminable MACN-SC-1411 (Pinturas Early/Middle Miocene of Santa Cruz Province, Argentina), [f] an extinct lineage of perching birds has been described from the Late Miocene of California, United States: the Palaeoscinidae with the single genus Palaeoscinis. "Palaeostruthus" eurius (Pliocene of Florida) probably belongs to an extant family, most likely passeroidean.

The Passeriformes is currently divided into three suborders: Acanthisitti (New Zealand wrens), Tyranni (suboscines) and Passeri (oscines). The Passeri has been traditionally subdivided into two major groups recognized now as Corvida and Passerida respectively containing the large superfamilies Corvoidea and Meliphagoidea, as well as minor lineages, and the superfamilies Sylvioidea, Muscicapoidea, and Passeroidea but this arrangement has been found to be oversimplified. Since the mid-2000s, literally, dozens of studies have investigated the phylogeny of the Passeriformes and found that many families from Australasia traditionally included in the Corvoidea actually represent more basal lineages within oscines. Likewise, the traditional three-superfamily arrangement within the Passeri has turned out to be far more complex and will require changes in classification.

Major " wastebin" families such as the Old World warblers and Old World babblers have turned out to be paraphyletic and are being rearranged. Several taxa turned out to represent highly distinct lineages, so new families had to be established, some of them – like the stitchbird of New Zealand and the Eurasian bearded reedling – monotypic with only one living species. [30] In the Passeri alone, a number of minor lineages will eventually be recognized as distinct superfamilies. For example, the kinglets constitute a single genus with less than 10 species today but seem to have been among the first perching bird lineages to diverge as the group spread across Eurasia. No particularly close relatives of them have been found among comprehensive studies of the living Passeri, though they might be fairly close to some little-studied tropical Asian groups. Nuthatches, wrens, and their closest relatives are currently grouped in a distinct super-family Certhioidea.

This list is in taxonomic order, placing related families next to one another. The families listed are those recognised by the International Ornithologists' Union (IOC). [1] The order and the division into infraorders, parvorders and superfamilies follows the phylogenetic analysis published by Carl Oliveros and colleagues in 2019. [29] [g] The relationships between the families in the suborder Tyranni (suboscines) were all well determined but some of the nodes in Passeri (oscines) were unclear owing to the rapid splitting of the lineages. [29] 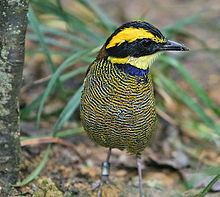 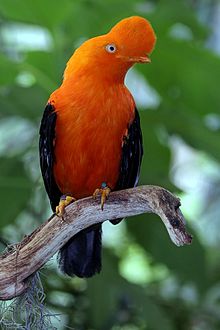 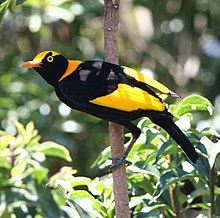 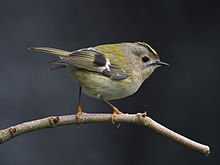 Reed warblers, such as this Blyth's reed warbler (Acrocephalus dumetorum), are now in the Acrocephalidae 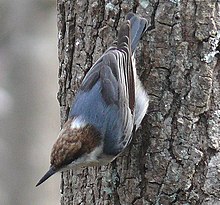 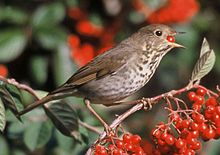 Hermit thrush (Catharus guttatus), like many Muscicapoidea a stout and cryptic bird with complex vocalizations.

Like these male (right) and female Gouldian finches (Erythrura gouldiae), many Passeroidea are very colorful

Relationships between living Passeriformes families based on the phylogenetic analysis of Oliveros et al (2019). [29] Some terminals have been renamed to reflect families recognised by the IOC but not in that study. [1] The IOC families Alcippeidae and Teretistridae were not sampled in this study.