From Wikipedia, the free encyclopedia
Device used to detect, track, and/or identify ionising particles
This article is about detection of ionizing radiation. For detection of non-ionizing particles, see particle counter.

In experimental and applied particle physics, nuclear physics, and nuclear engineering, a particle detector, also known as a radiation detector, is a device used to detect, track, and/or identify ionizing particles, such as those produced by nuclear decay, cosmic radiation, or reactions in a particle accelerator. Detectors can measure the particle energy and other attributes such as momentum, spin, charge, particle type, in addition to merely registering the presence of the particle. 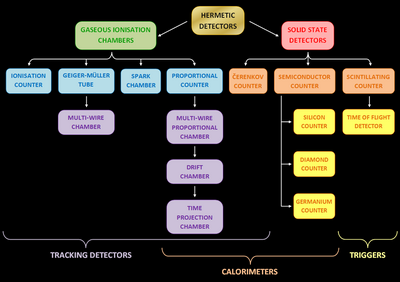 Recording of a bubble chamber at CERN

The following types of particle detector are widely used for radiation protection, and are commercially produced in large quantities for general use within the nuclear, medical, and environmental fields.

Modern detectors in particle physics combine several of the above elements in layers much like an onion.

Detectors designed for modern accelerators are huge, both in size and in cost. The term counter is often used instead of detector when the detector counts the particles but does not resolve its energy or ionization. Particle detectors can also usually track ionizing radiation (high energy photons or even visible light). If their main purpose is radiation measurement, they are called radiation detectors, but as photons are also (massless) particles, the term particle detector is still correct.

Beyond their experimental implementations, theoretical models of particle detectors are also of great importance to theoretical physics. These models consider localized non-relativistic quantum systems coupled to a quantum field. [1] They receive the name of particle detectors because when the non-relativistic quantum system is measured in an excited state, one can claim to have detected a particle. [2] [3] The first instance of particle detector models in the literature dates from the 80's, where a particle in a box was introduced by W. G. Unruh in order to probe a quantum field around a black hole. [2] Shortly after, Bryce DeWitt proposed a simplification of the model, [4] giving rise to the Unruh-DeWitt detector model.

Beyond their applications to theoretical physics, particle detector models are related to experimental fields such as quantum optics, where atoms can be used as detectors for the quantum electromagnetic field via the light-matter interaction. From a conceptual side, particle detectors also allow one to formally define the concept of particles without relying on asymptotic states, or representations of a quantum field theory. As M. Scully puts it, from an operational viewpoint one can state that "a particle is what a particle detector detects", [5] which in essence defines a particle as the detection of excitations of a quantum field.