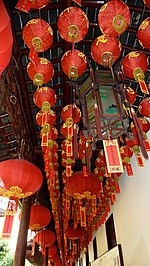 A paper lantern is a lantern made of thin, brightly colored paper. [1] Paper lanterns come in various shapes and sizes, as well as various methods of construction. In their simplest form, they are simply a paper bag with a candle placed inside, although more complicated lanterns consist of a collapsible bamboo or metal frame of hoops covered with tough paper.

Paper lanterns are likely derived from earlier lanterns that used other types of translucent material like silk, horn, or animal skin. The material covering was used to prevent the flame in the lantern from being extinguished by wind, while still retaining its use as a light source. Papermaking technology originated from China from at least AD 105 during the Eastern Han Dynasty, [2] [3] but it is unknown exactly when paper became used for lanterns. Poems about paper lanterns start to appear in Chinese history at around the 6th century. [2] Paper lanterns were common by the Tang Dynasty (AD 690–705), and it was during this period that the first annual lantern festival was established. [2] From China, it was spread to neighboring cultures in East Asia, Southeast Asia, and South Asia.

There are three general types of paper lanterns, they are:

In addition to everyday usage as a light source in the past, paper lanterns are commonly associated with festivals in East Asian, Southeast Asian, and South Asian cultures.

In Japan the traditional styles include bonbori and chōchin and there is a special style of lettering called chōchin moji used to write on them.

In the Philippines, a traditional paper lantern is the parol, which is regarded an iconic symbol of Filipino Christmas. Traditionally constructed using bamboo and Japanese paper, modern parols have been made using other materials such as plastic, metal, and capiz shells. Its most-common form is a five-pointed star, although it can come in various shapes and sizes. [4] [5] [6]

Dating back to the Spanish colonial period of the Philippines, parols are a traditional part of the Panunulúyan pageant in the nine-day Christmas Novena procession leading up to the Simbang Gabi (midnight mass). It was initially rectangular or oblong in shape but eventually came to be made in various shapes. It became standardized to a five-pointed star (symbolizing the Star of Bethlehem) during the American colonial period. [7]

During the Yi Peng festival of Thailand, some people also decorate their houses, gardens, and temples with khom fai ( Thai: โคมไฟ), intricately shaped paper lanterns which take on different forms. Khom thue ( Thai: โคมถือ) are lanterns which are carried around hanging from a stick, khom khwaen ( Thai: โคมแขวน) are the hanging lanterns, and khom pariwat ( Thai: โคมปริวรรต), which are placed at temples and which revolve due to the heat of the candle inside. The most elaborate Yi Peng celebrations can be seen in Chiang Mai, [8] the ancient capital of the former Lanna kingdom, where now both Loi Krathong and Yi Peng are celebrated at the same time resulting in lights floating on the waters, lights hanging from trees/buildings or standing on walls, and lights floating in the sky. The tradition of Yi Peng was also adopted by certain parts of Laos during the 16th century.

Thousands of sky lanterns called khom loi ( Thai: โคมลอย) are also released annually during the Yi Peng festival. However, this is a relatively new addition to the festival, only dating back to the first decade of the 21st century as part of tourism development. [9]

Two traditional festivals in Vietnam have prominent roles for lanterns:

Colorful paper lanterns called vesak kuudu are hung outside houses during the Buddhist festival of Vesak. [10]

Placing candles or tea lights in a succession of small paper bags (known as luminarias or farolitos) is a common Christmas tradition in New Mexico. The tradition originated from the parol paper lanterns of the Philippines brought over to the Americas during the colonial period. [11] [12] [13] [14]

During the Festa della Rificolona held in Florence, Italy, children carry colourful paper lanterns through the streets of the city.

In Germany, Austria, Switzerland and other German-speaking and some Dutch-speaking parts of Europe there is a tradition of the Sankt-Martins-Umzug (Sint-Maarten in Dutch), during which children parade with paper lanterns that are traditionally handmade.

High-wattage paper lanterns are commonly used in lighting for motion picture productions. Commonly referred to as "China balls", they provide soft, edgeless light to a scene. [15]