From Wikipedia
https://en.wikipedia.org/wiki/Outline_of_mining
Overview of and topical guide to mining 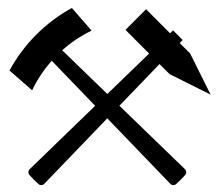 The hammer and pick, two basic tools traditionally used in mining for breaking rock, together form a main heraldic symbol of mining and miners. It is also used to mark the location of mines on maps. In other locations, the pickaxe and shovel fill the same purpose

The following outline is provided as an overview of and topical guide to mining:

Mining – extraction of valuable minerals or other geological materials from the earth, usually (but not always) from an ore body, vein or (coal) seam. Any material that cannot be grown from agricultural processes, or created artificially in a laboratory or factory, is usually mined.

Some examples of materials that are extracted from the earth by mining include:

Types of mining and techniques

Mining of specific minerals, by country

Leaders and innovators in mining