Orphism or Orphic Cubism, a term coined by the French poet Guillaume Apollinaire in 1912, was an offshoot of Cubism that focused on pure abstraction and bright colors, influenced by Fauvism, the theoretical writings of Paul Signac, Charles Henry and the dye chemist Michel Eugène Chevreul. This movement, perceived as key in the transition from Cubism to Abstract art, was pioneered by František Kupka, Robert Delaunay and Sonia Delaunay, who relaunched the use of color during the monochromatic phase of Cubism. [1] The meaning of the term Orphism was elusive when it first appeared and remains to some extent vague. [2]

The Orphists were rooted in Cubism but tended towards a pure lyrical abstraction. They saw art as the unification of sensation and color. More concerned with sensation, they began with recognizable subjects, depicted with abstract structures. Orphism aimed to vacate recognizable subject matter by concentrating exclusively on form and color. The movement also strove toward the ideals of Simultanism: endless interrelated states of being. [3]

The decomposition of spectral light in Neo-Impressionist color theory of Paul Signac and Charles Henry played an important role in the development of Orphism. Robert Delaunay, Albert Gleizes, and Gino Severini all knew Henry personally. [4] A mathematician, inventor, and esthetician, Charles Henry was a close friend of the Symbolist writers Félix Fénéon and Gustave Kahn. He also knew Seurat, Signac and Pissarro, whom he met during the eighth and last Impressionist exhibition in 1886. Henry brought emotional associational theory into the realm of art: something that ultimately influenced the Neo-Impressionists. Henry and Seurat agreed that the basic elements of art—line, color and form—like words, could be treated independently, each with its own abstract quantity, independent of one another, or in unison, depending on the intention of the artist. "Seurat knows well" wrote Fénéton in 1889, "that the line, independent of its topographical role, possesses an assessable abstract value" in addition to the particles of color, and the relation to emotion of the viewer. The underlying theory behind Neo-Impressionsim had a lasting effect on the works of Delaunay. [4] The Neo-Impressionists had succeeded in establishing an objective scientific basis for their painting in the domain of color, but only as regards the spectrum of light (for paint pigments the result was less scientific). The Cubists ultimately employed the theory to some extent in color, form and dynamics. [4]

The Symbolists perceived Orpheus of Greek mythology as the ideal artist. In 1907 Apollinaire wrote Bestiaire ou cortège d'Orphée, symbolizing Orpheus as a mystic and influential poet and artist, just as the Symbolists. The voice of light that Apollinaire mentioned in his poems was a metaphor for inner experiences. [2] 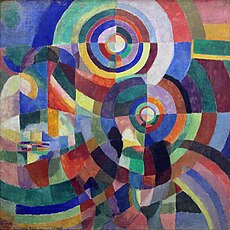 Apollinaire mentioned the term Orphism in an address at the Salon de la Section d'Or in 1912, referring to the pure painting of František Kupka. [5] In his 1913 Les Peintres Cubistes, Méditations Esthétiques Apollinaire described Orphism as "the art of painting new totalities with elements that the artist does not take from visual reality, but creates entirely by himself. [...] An Orphic painter's works should convey an 'untroubled aesthetic pleasure', a meaningful structure and sublime significance." Orphism represented a new art-form, much as music was to literature. These analogies could be seen in the titles of paintings such as Kupka's Amorpha: Fugue in Two Colors (1912); Francis Picabia's Dance at the Source (1912) and Wassily Kandinsky's Über das Geistige in der Kunst (1912). Kandinsky described the relationships between sound and color. Robert Delaunay was concerned with color and music, and exhibited with the Blaue Reiter at the request of Kandinsky. The increasingly abstract paintings of Fernand Léger and Marcel Duchamp were also treated as Orphists by Apollinaire. [2]

The Salon de la Section d'Or in 1912 was the first exhibition that presented Orphism to the general public. In March 1913 Orphism was exhibited at the Salon des Indépendants in Paris. Reviewing the salon in Montjoie (29 March 1913) Apollinaire argued for the abolition of Cubism in favor of Orphism: "If Cubism is dead, long live Cubism. The kingdom of Orpheus is at hand!" 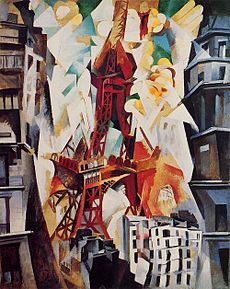 Robert Delaunay and his wife Sonia Terk Delaunay remained the main protagonists of the Orphic movement. Their earlier works focused on Fauvist colors, variously abstract; such as Sonia's 1907 Finnish Girl and Robert's 1906 Paysage au disque. The former relying on pure colors, the latter on color and mosaic-like brushstrokes painted under the influence of Jean Metzinger, also a Neo-Impressionist (with highly Divisionist and Fauve components) at the time. [4]

Even though Orphism was effectively dissolved before World War I, American painters Patrick Henry Bruce and Arthur Burdett Frost, two of R. Delaunay's pupils, embarked on a similar form of art from 1912 onward. The Synchromists Morgan Russell and Stanton Macdonald-Wright wrote their own manifestos in an attempt to differentiate themselves from the Orphism of the Delaunays. [6]