Order of the British Empire Information

The Most Excellent Order of the British Empire is a British order of chivalry, rewarding contributions to the arts and sciences, work with charitable and welfare organisations, and public service outside the civil service. [2] It was established on 4 June 1917 by King George V and comprises five classes across both civil and military divisions, the most senior two of which make the recipient either a knight if male or dame if female. [3] There is also the related British Empire Medal, whose recipients are affiliated with, but not members of the order.

The five classes of appointment to the Order are, in descending order of precedence:

The senior two ranks of Knight or Dame Grand Cross, and Knight or Dame Commander, entitle their members to use the title of Sir for men and Dame for women before their forename. Most members are citizens of the United Kingdom or the Commonwealth realms that use the Imperial system of honours and awards.

Honorary knighthoods are appointed to citizens of nations where the queen is not head of state, and may permit use of post-nominal letters but not the title of Sir or Dame. Occasionally, honorary appointees are, incorrectly, referred to as Sir or Dame. Honorary appointees who later become a citizen of a Commonwealth realm can convert their appointment from honorary to substantive, then enjoy all privileges of membership of the order, including use of the title of Sir and Dame for the senior two ranks of the Order. An example is Irish broadcaster Terry Wogan, who was appointed an honorary Knight Commander of the Order in 2005, and on successful application for British citizenship, held alongside his Irish citizenship, was made a substantive member and subsequently styled as Sir Terry Wogan. [4] [5] 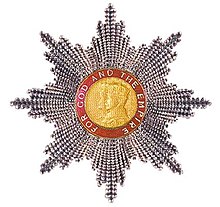 Grand Cross Star of the Order of the British Empire 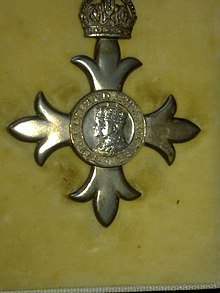 In particular, King George V wished to create an order to honour the many thousands of those who had served in a variety of non-combat roles during the First World War. When first established, the Order had only one division. However, in 1918, soon after its foundation, it was formally divided into Military and Civil Divisions.[ further explanation needed] [6] The Order's motto is For God and the Empire. [2]

At the foundation of the order, the Medal of the Order of the British Empire was instituted, to serve as a lower award granting recipients affiliation but not membership. In 1922, this was renamed the British Empire Medal (BEM). It stopped being awarded by the United Kingdom as part of the 1993 reforms to the honours system, but was again awarded beginning in 2012, starting with 293 BEMs awarded for Queen Elizabeth II's Diamond Jubilee. [7] In addition, the BEM is awarded by the Cook Islands and by some other Commonwealth nations. In 2004, a report entitled A Matter of Honour: Reforming Our Honours System by a Commons committee recommended to phase out the Order of the British Empire, as its title was "now considered to be unacceptable, being thought to embody values that are no longer shared by many of the country's population". [8]

The British monarch is sovereign of the order, and appoints all other members of the order (by convention, on the advice of the governments of the United Kingdom and some Commonwealth realms). The next most senior member is the Grand Master, of whom there have been three: Prince Edward, the Prince of Wales (1917–1936); Queen Mary (1936–1953); and the Duke of Edinburgh (1953–2021).

The order is limited to 300 Knights and Dames Grand Cross, 845 Knights and Dames Commander, and 8,960 Commanders. There are no limits applied to the total number of members of the fourth and fifth classes, but no more than 858 Officers and 1,464 Members may be appointed per year. Foreign appointees, as honorary members, do not contribute to the numbers restricted to the order as full members do. Although the Order of the British Empire has by far the highest number of members of the British orders of chivalry, with over 100,000 living members worldwide, there are fewer appointments to knighthoods than in other orders. [2]

Though men can be knighted separately from an order of chivalry ( Knight Bachelor), women cannot, and so the rank of Knight/Dame Commander of the Order is the lowest rank of damehood, and second-lowest of knighthood (above Knights Bachelor). Because of this, an appointment as Dame Commander is made in circumstances in which a man would be created a Knight Bachelor. For example, by convention, female judges of the High Court of Justice are created Dames Commander after appointment, while male judges become Knights Bachelor.

From time to time, individuals are appointed to a higher grade within the Order, thereby ceasing usage of the junior post-nominal letters.

In addition to the Sovereign and the Grand Master, the order has six offices: [9] The King of Arms is not a member of the College of Arms, as are many other heraldic officers. The Lady Usher of the Purple Rod does not – unlike the Order of the Garter equivalent, the Lady Usher of the Black Rod – perform any duties related to the House of Lords.

Although initially intended to recognise meritorious service, the order began to also be awarded for gallantry. There were an increased number of cases in the Second World War for service personnel and civilians including the merchant navy, police, emergency services and civil defence, mostly MBEs but with a small number of OBEs and CBEs. Such awards were for gallantry that did not reach the standard of the George Medal, but, as an order, were listed before it on the Order of Wear. Awards for meritorious service usually appear without a citation but there were often citations for gallantry awards, some detailed and graphic. [11] From 14 January 1958, these awards were designated Commander, Officer or Member of the Order of the British Empire for Gallantry. [12]

Any individual made a member of the order for gallantry after 14 January 1958 wears an emblem of two crossed silver oak leaves on the same ribbon as the badge, with a miniature version on the ribbon bar when worn alone. When the ribbon only is worn the emblem is worn in miniature. [12] It could not be awarded posthumously, and was replaced in 1974 with the Queen's Gallantry Medal (QGM). If recipients of the Order of the British Empire for Gallantry received promotion within the order, whether for gallantry or otherwise, they continued to wear also the insignia of the lower grade with the oak leaves. [13] However, they only used the post-nominal letters of the higher grade.

Members of the order wear elaborate vestments on important occasions (such as quadrennial services and coronations), which vary by rank (the designs underwent major changes in 1937):

On certain " collar days" designated by the Sovereign, members attending formal events may wear the order's collar over their military uniform, formal day dress, or evening wear. When collars are worn (either on collar days or on formal occasions such as coronations), the badge is suspended from the collar. Collars are returned upon the death of their owners, but other insignia may be retained.

Chapel of the Order in the crypt of St Paul's Cathedral (photographed in 2013). The banners are those of the Sovereign (right) and of the Grand Master (left) of the Order as they were then in office.

See also: Order of precedence in England and Wales 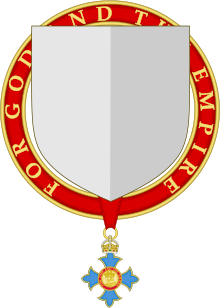 Knights, Dames and Commanders of the Order may display its circlet around (and suspend its Badge below) their coat of arms.

Knights Grand Cross and Knights Commander prefix Sir, and Dames Grand Cross and Dames Commander prefix Dame, to their forenames. [c] Wives of Knights may prefix Lady to their surnames, but no equivalent privilege exists for husbands of Knights or spouses of Dames. Such forms are not used by peers and princes, except when the names of the former are written out in their fullest forms. Male clergy of the Church of England or the Church of Scotland do not use the title Sir as they do not receive the accolade (they are not dubbed "knight" with a sword), although they do append the post-nominal letters: dames do not receive the accolade, and therefore female clergy are free to use the title Dame.

Knights and Dames Grand Cross are also entitled to be granted heraldic supporters. They may, furthermore, encircle their arms with a depiction of the circlet (a circle bearing the motto) and the collar; the former is shown either outside or on top of the latter. Knights and Dames Commander and Commanders may display the circlet, but not the collar, surrounding their arms. The badge is depicted suspended from the collar or circlet. [16]

Military ranks listed denotes the awarded being in the military division.

For a more comprehensive list, see List of current honorary Knights and Dames of the Order of the British Empire.

Countries making recommendations to the Order of the British Empire (2020)
Main article: Orders and decorations of the Commonwealth realms

Since the Second World War, several Commonwealth realms have established their own national system of honours and awards and have created their own unique orders, decorations and medals.

See also: List of people who have declined a British honour

In 2003, The Sunday Times published a list of the people who had rejected the Order of the British Empire, including David Bowie, John Cleese, Nigella Lawson, Elgar Howarth, L. S. Lowry, George Melly, and J. G. Ballard. [21] In addition, Ballard voiced his opposition to the honours system, calling it "a preposterous charade". [21] The order has attracted some criticism for its naming having connection with the idea of the now-extinct British Empire. [22] Benjamin Zephaniah, a British Jamaican poet, publicly rejected appointment as an Officer in 2003 because, he asserted, it reminded him of "thousands of years of brutality". He also said that "it reminds me of how my foremothers were raped and my forefathers brutalised". [23]

In 2004, a House of Commons Select Committee recommended changing the name of the award to the Order of British Excellence, and changing the rank of Commander to Companion; as the former was said to have a "militaristic ring". [22] [24]

A notable person to decline the offer of membership was the author C. S. Lewis (1898–1963), who had been named on the last list of honours by George VI in December 1951. Despite being a monarchist, he declined so as to avoid association with any political issues. [25] [26]

The Beatles were appointed Members in 1965: John Lennon justified the comparative merits of his investiture by comparing military membership in the Order: "Lots of people who complained about us receiving the MBE [status] received theirs for heroism in the war – for killing people ... We received ours for entertaining other people. I'd say we deserve ours more". Lennon later returned his MBE insignia on 25 November 1969, as part of his ongoing peace protests. [27] Other criticism centres on the view that many recipients of the Order are being rewarded with honours for simply doing their jobs; critics say that the Civil Service and Judiciary receive far more orders and honours than leaders of other professions. [22]

Chin Peng, a veteran guerrilla fighter of the Malayan Peoples' Anti-Japanese Army, was appointed as an Officer for his role in fighting against the Japanese occupation of Malaya during World War II, in close co-operation with the British commando Force 136. Several years after WWII, his OBE membership was withdrawn by the British government (and became undesirable to Chin Peng himself) when the Communist leader headed his party's guerrilla insurgency against the British Empire during the Malayan Emergency. [28]