From Wikipedia
https://en.wikipedia.org/wiki/Open_space_reserve
This article is about a land use planning and conservation term. For other things and terms with the same name, see Open space. 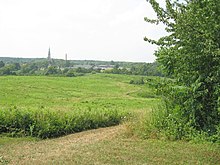 The purpose of an open space reserve may include the preservation or conservation of a community or region's rural natural or historic character; the conservation or preservation of a land or water area for the sake of recreational, ecological, environmental, aesthetic, or agricultural interests; or the management of a community or region's growth in terms of development, industry, or natural resources extraction. Open space reserves may be urban, suburban, or rural; they may be actual designated areas of land or water, or they may be zoning districts or overlays where development is limited or controlled to create undeveloped areas of land or water within a community or region. They may be publicly owned or owned by non-profit or private interests.

There is growing evidence that open space is unequally distributed based on race and class, particularly in the US state of California, leading to concerns regarding Open Space Accessibility in California and other areas. [1]