Oiseaux exotiques (Exotic birds) is a piece for piano and small orchestra by Olivier Messiaen. It was written between 5 October 1953 and 3 January 1956 and was commissioned by Pierre Boulez. It is dedicated to Yvonne Loriod, the composer's wife. [1]

This piece was first performed at the Théâtre du Petit Marigny by Yvonne Loriod and the ensemble Domaine musical, conducted by Rudolf Alberth. 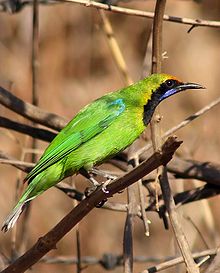 The birdsongs in this piece are from Asia and the Americas: the southern hill myna, the golden-fronted leafbird, the Baltimore oriole, the greater prairie chicken, the northern mockingbird, the catbird, the Indian robin, the white-crested laughingthrush, the american robin (entrusted to the two clarinets), the Swainson's thrush, the hermit thrush, the red-whiskered bulbul and the wood thrush.

The piece lasts about 16 minutes.