The South Korean government has set SpaceX as a "role model", striving to develop relatively cheap and reliable rockets competitive enough for the commercial launch market. [12]

Further improvements will be added after the success of KSLV-II program, mainly increasing the thrust of the KRE-075 from 744 kN (167,000 lbf) to 849 kN (191,000 lbf) and specific impulse from 261.7 seconds to 315.4 seconds. There are also plans on making the engine lighter by methods such as removing the pyrotechnic ignitor or limiting its gimbal range. This will allow the payload capacity of the modified KSLV-II to increase from 1.5 tons to 2.8 tons. [19]

When technology development for Nuri began by October 2010, [18] [20] the overall design goal was to develop a new expendable medium-lift launch vehicle that would be entirely developed with indigenous technology from Korea. As Nuri first reached orbit in June 2022, the total cost of the development program had been approximately US$1.5 billion. [15] 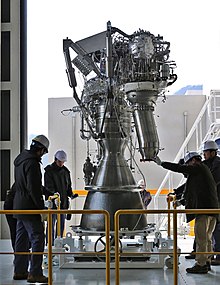 The Test Launch Vehicle (TLV) was a single stage launch vehicle (with a planned two stage version), qualifying the performance of the KRE-075 engine which powers the KSLV-II. The TLV was 25.8 m (85 ft) in length, 2.6 m (8 ft 6 in) in diameter, and with a mass of 52.1 tons. The main-stage liquid rocket propellant engine was fully gimballed. [24] [25] With the 2nd stage engine installed, the two-stage version of TLV could perform as a small satellite launch vehicle. [26]

The TLV was launched from the Naro Space Center in Goheung, South Jeolla Province, on 28 November 2018. The main objective of the first suborbital flight was for the single-stage rocket's main engine to burn 140 seconds, reaching a 100 km altitude before splashing down in the sea between Jeju Island and Okinawa Island. [28]

The maiden flight was first delayed from 25 October 2018 for one month, due to abnormal readings detected in the launch vehicle propellant pressurization system. [29] The test flight was then rescheduled for 28 November 2018, at 07:00 UTC (16:00 KST). No payload was to be placed into orbit. [30]

As the TLV was meant to serve as a test craft, and as the flight ended in a success, there was not a second TLV launch.

An upgraded variety of KSLV-II for geostationary equatorial orbit is under development. It will cluster four KRE-090 engines in the core stage, with four side boosters equipped with one KRE-090 engine each. The second stage will be powered with a vacuum-optimized variety of the same KRE-090 engine (KRE-090V), and the third stage will implement a newly developed KRE-010V oxidizer-rich staged combustion engine. [34]

Nuri will be used in launching several Earth observation satellites, such as KOMPSAT, medium-class satellites and LEO reconnaissance satellites. It is planned to support South Korea's Moon exploration mission to send orbiters and landers. Nuri will be South Korea's first launch vehicle to enter the commercial launch service market. The launch cost is estimated to be around US$30 million, which is cheaper than its Asian counterparts. This will allow for South Korea to provide cheap launch services for Southeast Asia countries. [35]

An improved version of Nuri is expected to launch a Korean lunar lander by 2030.