More than 99% of northern rockhoppers breed during late spring or early summer on Tristan da Cunha and Gough Island in the south Atlantic Ocean. [6] Breeding colonies are also found on the French Southern and Antarctic Lands of Amsterdam Island and St Paul Island. [7]

The southern rockhopper penguin (Eudyptes chrysocome) was split into three distinct subspecies in 1992; the southern, (E. c. chrysocome), eastern (E. c. filholi) and northern rockhopper penguin (E. c. moseleyi). The three subspecies are distinguished by differences in the length of the tassels of the crests, the size and colour of the fleshy margin of the gape, colour pattern on the underside of the flipper and differences in the size of the superciliary stripe in front of the eye. Additionally, the northern rockhopper penguin is larger than the other two subspecies. [8] Proof that the three subspecies were truly different, in terms of more than reproductive isolation and some morphological features, was found in the mitochondrial sequences of the three species. It was found E. c. filholi and E. c. chrysocome were not as different genetically as E. c. moseleyi was to the other two subspecies. The level of genetic differentiation was similar to the genetic difference found in other penguin subspecies groups. [3]

The northern rockhopper penguin feeds on krill and other sea life such as crustaceans, squid, octopus and fish. [6]

It breeds in colonies in a range of locations from sea level or on cliff sides, to sometimes inland. [6] The Northern form, found in Amsterdam and Gough island, is reproductively isolated from the Crozet and Kerguelen islands. They are monophyletic; meaning they have a split in the mitochondria DNA trees which forms two subspecies: the northern and southern rockhopper penguin. [12] Another interesting difference between the two subspecies is their mating ritual. They both use different songs and head ornaments in their mating signals. The reproductive isolation has led to not only physical difference but also behavioral. [13] The adults feed their chicks lower trophic level prey than they themselves consume. During breeding season the adults eat zooplankton and then transition to fish, showing they favor future reproduction. [14] 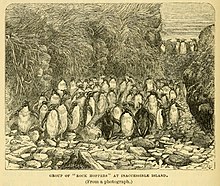 Northern rockhopper penguins on Inaccessible Island, drawn by the naturalist aboard HMS Challenger

A study published in 2009 showed that the world population of the northern rockhopper had declined by 90% since the 1950s, possibly because of climate change, changes in marine ecosystems and overfishing for squid and octopus by humans. [16] Other possible factors in the decline include disturbance and pollution from ecotourism and fishing, egg-harvesting, and predation and competition from subantarctic fur seals (Arctophoca tropicalis). [6] Surveys show that the birds are at risk of infection by goose barnacles. [17] House mice (Mus musculus) have been introduced into their environment by human sea expeditions. The mice have proven to be invasive, and consume northern rockhopper eggs, as well as hunt their young. In order to preserve the birds, a culling of the mice is being considered. [18] The climate change conditions alter food availability since it reduces nutrients and productivity. This causes an effect on the body mass, causing a negative impact on their reproductivity success. [19]

The northern rockhopper penguin is classified as endangered because of the decline in numbers over the last three generations (or 30 years). [6]

Population Trends by Year and Island [2]

On March 16, 2011, the Maltese-registered freighter MS Oliva ran aground on Nightingale Island, spilling tons of heavy crude into the ocean. The crew was rescued, but the ship broke up, leaving an oil slick that surrounded the island, threatening its population of rockhopper penguins. [20] [21] Nightingale Island has no fresh water, so the penguins were transported to Tristan da Cunha for cleaning. [22]