From Wikipedia
(Redirected from Nonlinear)
https://en.wikipedia.org/wiki/Nonlinear
System where changes of output are not proportional to changes of input
"Nonlinear dynamics" redirects here. For the journal, see Nonlinear Dynamics (journal).
This article is about "nonlinearity" in mathematics, physics and other sciences. For video and film editing, see Non-linear editing system. For other uses, see Nonlinearity (disambiguation).

In mathematics and science, a nonlinear system is a system in which the change of the output is not proportional to the change of the input. [1] [2] Nonlinear problems are of interest to engineers, biologists, [3] [4] [5] physicists, [6] [7] mathematicians, and many other scientists because most systems are inherently nonlinear in nature. [8] Nonlinear dynamical systems, describing changes in variables over time, may appear chaotic, unpredictable, or counterintuitive, contrasting with much simpler linear systems.

Typically, the behavior of a nonlinear system is described in mathematics by a nonlinear system of equations, which is a set of simultaneous equations in which the unknowns (or the unknown functions in the case of differential equations) appear as variables of a polynomial of degree higher than one or in the argument of a function which is not a polynomial of degree one. In other words, in a nonlinear system of equations, the equation(s) to be solved cannot be written as a linear combination of the unknown variables or functions that appear in them. Systems can be defined as nonlinear, regardless of whether known linear functions appear in the equations. In particular, a differential equation is linear if it is linear in terms of the unknown function and its derivatives, even if nonlinear in terms of the other variables appearing in it.

As nonlinear dynamical equations are difficult to solve, nonlinear systems are commonly approximated by linear equations ( linearization). This works well up to some accuracy and some range for the input values, but some interesting phenomena such as solitons, chaos, [9] and singularities are hidden by linearization. It follows that some aspects of the dynamic behavior of a nonlinear system can appear to be counterintuitive, unpredictable or even chaotic. Although such chaotic behavior may resemble random behavior, it is in fact not random. For example, some aspects of the weather are seen to be chaotic, where simple changes in one part of the system produce complex effects throughout. This nonlinearity is one of the reasons why accurate long-term forecasts are impossible with current technology.

Some authors use the term nonlinear science for the study of nonlinear systems. This term is disputed by others:

Using a term like nonlinear science is like referring to the bulk of zoology as the study of non-elephant animals.

In mathematics, a linear map (or linear function)

is one which satisfies both of the following properties:

Additivity implies homogeneity for any rational α, and, for continuous functions, for any real α. For a complex α, homogeneity does not follow from additivity. For example, an antilinear map is additive but not homogeneous. The conditions of additivity and homogeneity are often combined in the superposition principle

An equation written as

is called linear if

is a linear map (as defined above) and nonlinear otherwise. The equation is called homogeneous if

is very general in that

can be any sensible mathematical object (number, vector, function, etc.), and the function

can literally be any mapping, including integration or differentiation with associated constraints (such as boundary values). If

contains differentiation with respect to

, the result will be a differential equation.

Nonlinear algebraic equations, which are also called polynomial equations, are defined by equating polynomials (of degree greater than one) to zero. For example,

For a single polynomial equation, root-finding algorithms can be used to find solutions to the equation (i.e., sets of values for the variables that satisfy the equation). However, systems of algebraic equations are more complicated; their study is one motivation for the field of algebraic geometry, a difficult branch of modern mathematics. It is even difficult to decide whether a given algebraic system has complex solutions (see Hilbert's Nullstellensatz). Nevertheless, in the case of the systems with a finite number of complex solutions, these systems of polynomial equations are now well understood and efficient methods exist for solving them. [11]

One of the greatest difficulties of nonlinear problems is that it is not generally possible to combine known solutions into new solutions. In linear problems, for example, a family of linearly independent solutions can be used to construct general solutions through the superposition principle. A good example of this is one-dimensional heat transport with Dirichlet boundary conditions, the solution of which can be written as a time-dependent linear combination of sinusoids of differing frequencies; this makes solutions very flexible. It is often possible to find several very specific solutions to nonlinear equations, however the lack of a superposition principle prevents the construction of new solutions.

as a general solution (and also

as a particular solution, corresponding to the limit of the general solution when C tends to infinity). The equation is nonlinear because it may be written as

and its derivatives. Note that if the

term were replaced with

, the problem would be linear (the exponential decay problem).

Common methods for the qualitative analysis of nonlinear ordinary differential equations include:

Another common (though less mathematical) tactic, often exploited in fluid and heat mechanics, is to use scale analysis to simplify a general, natural equation in a certain specific boundary value problem. For example, the (very) nonlinear Navier-Stokes equations can be simplified into one linear partial differential equation in the case of transient, laminar, one dimensional flow in a circular pipe; the scale analysis provides conditions under which the flow is laminar and one dimensional and also yields the simplified equation.

Other methods include examining the characteristics and using the methods outlined above for ordinary differential equations.

Illustration of a pendulum 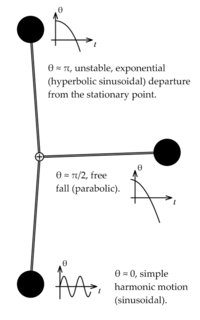 Linearizations of a pendulum

A classic, extensively studied nonlinear problem is the dynamics of a frictionless pendulum under the influence of gravity. Using Lagrangian mechanics, it may be shown [14] that the motion of a pendulum can be described by the dimensionless nonlinear equation

where gravity points "downwards" and

is the angle the pendulum forms with its rest position, as shown in the figure at right. One approach to "solving" this equation is to use

as an integrating factor, which would eventually yield

which is an implicit solution involving an elliptic integral. This "solution" generally does not have many uses because most of the nature of the solution is hidden in the nonelementary integral (nonelementary unless

Another way to approach the problem is to linearize any nonlinearity (the sine function term in this case) at the various points of interest through Taylor expansions. For example, the linearization at

, called the small angle approximation, is

. This is a simple harmonic oscillator corresponding to oscillations of the pendulum near the bottom of its path. Another linearization would be at

, corresponding to the pendulum being straight up:

. The solution to this problem involves hyperbolic sinusoids, and note that unlike the small angle approximation, this approximation is unstable, meaning that

will usually grow without limit, though bounded solutions are possible. This corresponds to the difficulty of balancing a pendulum upright, it is literally an unstable state.

One more interesting linearization is possible around

This corresponds to a free fall problem. A very useful qualitative picture of the pendulum's dynamics may be obtained by piecing together such linearizations, as seen in the figure at right. Other techniques may be used to find (exact) phase portraits and approximate periods.