Plato (left) and Nicomachus (right), as inventors of music, from a 12th-century manuscript

Nicomachus of Gerasa [1] ( Greek: Νικόμαχος; c. 60 – c. 120 AD) was an important ancient mathematician and music theorist, [2] best known for his works Introduction to Arithmetic and Manual of Harmonics in Greek. He was born in Gerasa, in the Roman province of Syria (now Jerash, Jordan). He was a Neopythagorean, who wrote about the mystical properties of numbers. [3] [4]

Little is known about the life of Nicomachus except that he was a Pythagorean who came from Gerasa. Historians consider him a Neopythagorean based on his tendency to view numbers as having mystical properties. [3] [4] The age in which he lived (c. 100 AD) is only known because he mentions Thrasyllus in his Manual of Harmonics, and because his Introduction to Arithmetic was apparently translated into Latin in the mid 2nd century by Apuleius. [5] His Manual of Harmonics was addressed to a lady of noble birth, at whose request Nicomachus wrote the book, which suggests that he was a respected scholar of some status. [5] He mentions his intent to write a more advanced work, and how the journeys he frequently undertakes leave him short of time. [5] 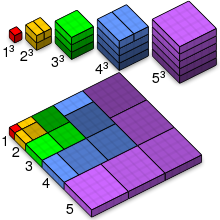 Nicomachus's theorem states that a square whose side length is a triangular number can be partitioned into squares and half-squares whose areas add to cubes
Further information: Greek mathematics

Introduction to Arithmetic (Ἀριθμητικὴ εἰσαγωγή, Arithmetike eisagoge), the lesser work on arithmetic. As a Neopythagorean, Nicomachus was often more interested in the mystical properties of numbers rather than their mathematical properties. [3] [4] According to Henrietta O. Midonick (1965), he distinguishes between the wholly conceptual immaterial number, which he regards as the 'divine number', and the numbers which measure material things, the 'scientific' number. [5] [6] He writes extensively on numbers, especially on the significance of prime numbers and perfect numbers and argues that arithmetic is ontologically prior to the other mathematical sciences ( music, geometry, and astronomy), and is their cause. Boethius' De institutione arithmetica is in large part a Latin translation of this work. However Introduction of Arithmetic does contain quite elementary errors which show that Nicomachus chose not to give proofs of his results because he did not in general have such proofs. Many of the results were known by Nicomachus to be true since they appeared with proofs in Euclid's Elements, although in a geometrical formulation. Sometimes Nicomachus states a result which is simply false and then illustrates it with an example that happens to have the properties described in the result. We can deduce from this that some of the results are merely guesses based on the evidence of the numerical examples.

Although he was preceded by the Babylonians and the Chinese, [7] Nicomachus provided one of the earliest Greco-Roman multiplication tables, whereas the oldest extant Greek multiplication table is found on a wax tablet dated to the 1st century AD (now found in the British Museum). [8]

Manuale Harmonicum (Ἐγχειρίδιον ἁρμονικῆς, Encheiridion Harmonikes). This is the first important music theory treatise since the time of Aristoxenus and Euclid. It provides the earliest surviving record of the legend of Pythagoras's epiphany outside of a smithy that pitch is determined by numeric ratios. Nicomachus also gives the first in-depth account of the relationship between music and the ordering of the universe via the " music of the spheres." Nicomachus's discussion of the governance of the ear and voice in understanding music unites Aristoxenian and Pythagorean concerns, normally regarded as antitheses. [2] In the midst of theoretical discussions, Nicomachus also describes the instruments of his time, also providing a valuable resource. In addition to the Manual, ten extracts survive from what appear to have originally been a more substantial work on music.

The works which are lost are: