From Wikipedia
https://en.wikipedia.org/wiki/Neurodevelopmental_disorder
Group of disorders that affect the development of the nervous system
Medical condition

Neurodevelopmental disorders [1] [2] are impairments of the growth and development of the brain and/or central nervous system. A narrower use of the term refers to a disorder of brain function that affects emotion, learning ability, self-control and memory which unfolds as an individual develops and grows. [3]

According to the DSM-5, the neurodevelopmental disorders include the following: [2]

There are neurodevelopmental research projects examining potential new classifications of disorders including:

The multitude of neurodevelopmental disorders span a wide range of associated symptoms and severity, resulting in different degrees of mental, emotional, physical, and economic consequences for individuals, and in turn families, social groups, and society.[ citation needed]

Deprivation from social and emotional care causes severe delays in brain and cognitive development. [16] Studies with children growing up in Romanian orphanages during Nicolae Ceauşescu's regime reveal profound effects of social deprivation and language deprivation on the developing brain. These effects are time-dependent. The longer children stayed in negligent institutional care, the greater the consequences. By contrast, adoption at an early age mitigated some of the effects of earlier institutionalization (abnormal psychology). [17] 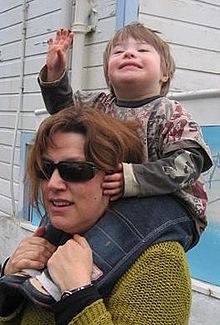 A child with Down syndrome

A prominent example of a genetically determined neurodevelopmental disorder is Trisomy 21, also known as Down syndrome. This disorder usually results from an extra chromosome 21, [18] although in uncommon instances it is related to other chromosomal abnormalities such as translocation of the genetic material. It is characterized by short stature, epicanthal ( eyelid) folds, abnormal fingerprints, and palm prints, heart defects, poor muscle tone (delay of neurological development) and intellectual disabilities (delay of intellectual development). [4]

Immune reactions during pregnancy, both maternal and of the developing child, may produce neurodevelopmental disorders. One typical immune reaction in infants and children is PANDAS, [23] or Pediatric Autoimmune Neuropsychiatric Disorders Associated with Streptococcal infection. [24] Another disorder is Sydenham's chorea, which results in more abnormal movements of the body and fewer psychological sequellae. Both are immune reactions against brain tissue that follow infection by Streptococcus bacteria. Susceptibility to these immune diseases may be genetically determined, [25] so sometimes several family members may have one or both of them following an epidemic of Strep infection.[ citation needed]

A number of infectious diseases can be transmitted congenitally (either before or at birth), and can cause serious neurodevelopmental problems, as for example the viruses HSV, CMV, rubella ( congenital rubella syndrome), Zika virus, or bacteria like Treponema pallidum in congenital syphilis, which may progress to neurosyphilis if it remains untreated. Protozoa like Plasmodium [26] or Toxoplasma which can cause congenital toxoplasmosis with multiple cysts in the brain and other organs, leading to a variety of neurological deficits.

Some cases of schizophrenia may be related to congenital infections though the majority are of unknown causes. [27]

Metabolic disorders in either the mother or the child can cause neurodevelopmental disorders. Two examples are diabetes mellitus (a multifactorial disorder) and phenylketonuria (an inborn error of metabolism). Many such inherited diseases may directly affect the child's metabolism and neural development [28] but less commonly they can indirectly affect the child during gestation. (See also teratology).

In a child, type 1 diabetes can produce neurodevelopmental damage by the effects of excess or insufficient glucose. The problems continue and may worsen throughout childhood if the diabetes is not well controlled. [29] Type 2 diabetes may be preceded in its onset by impaired cognitive functioning. [30]

A non-diabetic fetus can also be subjected to glucose effects if its mother has undetected gestational diabetes. Maternal diabetes causes excessive birth size, making it harder for the infant to pass through the birth canal without injury or it can directly produce early neurodevelopmental deficits. Usually the neurodevelopmental symptoms will decrease in later childhood. [31]

Phenylketonuria, also known as PKU, can induce neurodevelopmental problems and children with PKU require a strict diet to prevent intellectual disability and other disorders. In the maternal form of PKU, excessive maternal phenylalanine can be absorbed by the fetus even if the fetus has not inherited the disease. This can produce intellectual disability and other disorders. [32] [33]

Nutrition disorders and nutritional deficits may cause neurodevelopmental disorders, such as spina bifida, and the rarely occurring anencephaly, both of which are neural tube defects with malformation and dysfunction of the nervous system and its supporting structures, leading to serious physical disability and emotional sequelae. The most common nutritional cause of neural tube defects is folic acid deficiency in the mother, a B vitamin usually found in fruits, vegetables, whole grains, and milk products. [34] [35] (Neural tube defects are also caused by medications and other environmental causes, many of which interfere with folate metabolism, thus they are considered to have multifactorial causes.) [36] [37] Another deficiency, iodine deficiency, produces a spectrum of neurodevelopmental disorders ranging from mild emotional disturbance to severe intellectual disability. (see also congenital iodine deficiency syndrome)[ citation needed]

Excesses in both maternal and infant diets may cause disorders as well, with foods or food supplements proving toxic in large amounts. For instance in 1973 K.L. Jones and D.W. Smith of the University of Washington Medical School in Seattle found a pattern of "craniofacial, limb, and cardiovascular defects associated with prenatal onset growth deficiency and developmental delay" in children of alcoholic mothers, now called fetal alcohol syndrome, It has significant symptom overlap with several other entirely unrelated neurodevelopmental disorders. [38] 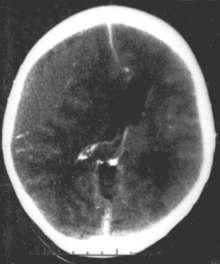 Brain trauma in the developing human is a common cause (over 400,000 injuries per year in the US alone, without clear information as to how many produce developmental sequellae) [39] of neurodevelopmental syndromes. It may be subdivided into two major categories, congenital injury (including injury resulting from otherwise uncomplicated premature birth) [6] and injury occurring in infancy or childhood. Common causes of congenital injury are asphyxia (obstruction of the trachea), hypoxia (lack of oxygen to the brain) and the mechanical trauma of the birth process itself.[ citation needed]

Although it not clear yet as strong is the correlation between placenta and brain, a growing number of studies are linking placenta to fetal brain development. [40]

Neurodevelopmental disorders are diagnosed by evaluating the presence of characteristic symptoms or behaviors in a child, typically after a parent, guardian, teacher, or other responsible adult has raised concerns to a doctor. [41]

Neurodevelopmental disorders may also be confirmed by genetic testing. Traditionally, disease related genetic and genomic factors are detected by karyotype analysis, which detects clinically significant genetic abnormalities for 5% of children with a diagnosed disorder. As of 2017 [update], chromosomal microarray analysis (CMA) was proposed to replace karyotyping because of its ability to detect smaller chromosome abnormalities and copy-number variants, leading to greater diagnostic yield in about 20% of cases. [22] The American College of Medical Genetics and Genomics and the American Academy of Pediatrics recommend CMA as standard of care in the US. [22]