A netsuke ( 根付, [netsɯ̥ke]) is a miniature sculpture, originating in 17th century Japan. Initially a simply-carved button fastener on the cords of an inro box, netsuke later developed into ornately sculpted objects of craftsmanship. 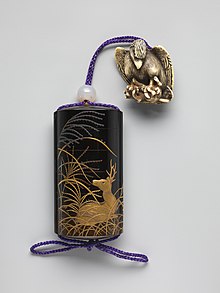 An ivory netsuke with an eagle design and an inro with a deer design. The combination of netsuke and inro creates a story of an eagle preying on deer. Edo period, 18th century

Traditionally, Japanese clothing – first the kosode and its later evolution, the kimono – did not have pockets. Though the sleeves of the kimono could be used to store small items, the men who wore kimono needed a larger and stronger container in which to store personal belongings, such as pipes, tobacco, money and seals, resulting in the development of containers known as sagemono, which were hung by cords from the robes' sashes ( obi).

These containers may have been pouches or small woven baskets, but the most popular were crafted boxes (inro) held shut by ojime, sliding beads on cords. Whatever the form of the container, the fastener that secured the cord at the top of the sash was a carved, button-like toggle called a netsuke. Netsuke, like inro and ojime, evolved over time from being strictly utilitarian into objects of great artistic merit, and an expression of extraordinary craftsmanship. Netsuke production was most popular during the Edo period (1603–1867).

Today, the production of netsuke continues, and some modern netsuke can command high prices in the UK, Europe, the USA, Japan and elsewhere. Inexpensive yet faithful reproductions are available in museums and souvenir shops.

The term netsuke is formed from the characters ne (根, meaning 'root') and tsuke (付, meaning 'attached'). In American English, the word is usually italicized, while it is usually unitalicized in British English. [2] [3] 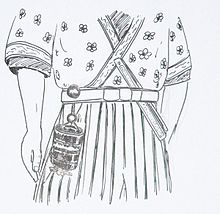 Drawing of a man wearing an inrō supported by a netsuke passed through the ties of his hakama.

Anabori-netsuke (穴彫根付, or "hollowed netsuke")
Subset of katabori which are carved out for a hollow center. Clams are most commonly the motifs for this type of netsuke.
Kagamibuta-netsuke (鏡蓋根付, or "mirror-lid netsuke").  Kagamibuta-netsuke
Shaped like a manjū, but with a metal disc serving as a lid to a shallow bowl, usually of ivory. The metal is often highly decorated with a wide variety of metallurgical techniques.
Karakuri-netsuke (からくり根付, or "trick/mechanism netsuke")
Any netsuke that has moving parts or hidden surprises.
Katabori-netsuke (形彫根付, or "sculpture netsuke")
This is the most common type of netsuke. They are compact three-dimensional figures carved in a round shape and are usually around one to three inches high.
Manjū-netsuke (饅頭根付)
A thick, flat, round netsuke, with carving usually done in relief, sometimes made of two ivory halves. Shaped like a manjū bun, a Japanese confection.
Men-netsuke (面根付, or "mask netsuke")
The largest category after katabori. These were often imitations of full-size Noh masks and share characteristics in common with both katabori and manju/kagamibuta.
Obi-hasami
Another elongated netsuke with a curved top and bottom. It sits behind the obi with the curved ends visible above and below the obi.
Ryūsa-netsuke (柳左根付)
Shaped like a manjū, but carved like lace, so that light is transmitted through the item.
Sashi-netsuke (差根付)
This is an elongated form of katabori, literally "stab" netsuke, similar in length to the sticks and gourds used as improvised netsuke before carved pieces were produced. They are about 6 inches (150 mm) long. 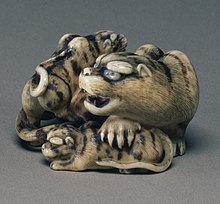 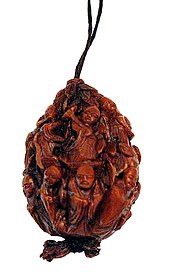 Like many other art forms, netsuke reflect the nature of the society that produced them. This effect is particularly pronounced in netsuke, owing to long periods of isolation imposed both by geography and internal politics and limited avenues of self-expression for Japanese citizens due to custom and law. [8] [9] [10] As a result, netsuke display every aspect of Japanese culture, including its rich folklore and religion, crafts, trades, and professions, all types of people and creatures, both real and imagined, and every kind of object. As in other aspects of Japanese culture, the subjects portrayed by netsuke trend, over the long term, away from an initial emphasis on motifs of Chinese derivation toward a focus on objects of more strictly national interest. [11]

Some netsuke represent single, simple, objects, and some depict entire scenes from history, mythology, or literature. 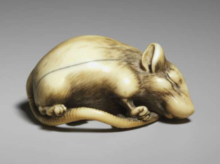 Carved netsuke of a sleeping rat, made out of ivory, by Masanao from Kyoto

Sōken Kishō (装劍奇賞) is the earliest compilation of netsuke artists, which lists over 50 netsuke masters. It was published in Osaka in 1781 by Inaba Tsūryū. [13] Some works of art are even illustrated in it. [14]

One of the most renowned artists during the Edo period was the founder of the Nagoya school, Tametaka (為隆), who is listed in the Sōken Kishō. [15] He was followed in Nagoya by Ikkan (一貫). [16] His pieces can be found in many collections and achieve high prices at auctions. [17]

In Kyoto, Japan, there is the Kyoto Seishu Netsuke Art Museum, which is the only netsuke specialized art museum in Japan. This museum is a traditional Japanese samurai residence built in the late Edo period. It has a collection of over 5,000 netsuke and 400 of them are on display and change every 3 months. The collection focuses on modern works, but there are also works from the Edo period. [20] [21]

In the Tokyo National Museum, there is a small netsuke room where some of the contemporary works collected by Prince and Princess Takamado are on display. [22] The Tokyo National Museum has 274 high quality items collected by Go Seinosuke (郷 誠之助, 1865–1942) and made by famous netsuke craftsmen from the Edo period to the Meiji period. They were donated by Go who was concerned that too many netsuke were exported from Japan and they were rarely seen in Japan. [23] [19]