From Wikipedia
https://en.wikipedia.org/wiki/Negative_space
Space around an object
For the song by A Day to Remember, see Bad Vibrations. For the animated short film, see Negative Space (film).
Not to be confused with White space (visual arts). 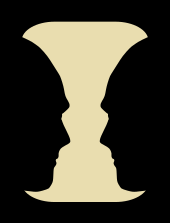 Rubin's vase is an optical illusion in which the negative space around the vase forms the silhouettes of two faces in profile, a well-known example of figure-ground reversal by emphasizing that negative space

FedEx‘s logo displays an arrow between letters E and x. Not being in full silhouette, the effect is subtle and may not be noticed.

ambigram tessellation Escher where the negative space is used upside down to reveal the same word with a 180° rotational symmetry. 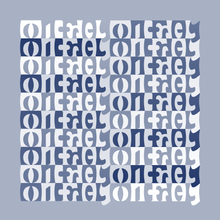 Michel Onfray in negative space, with the surname shaped by the letters of the given name, and reciprocally.

The use of negative space is a key element of artistic composition. The Japanese word " ma" is sometimes used for this concept, for example in garden design. [2] [3] [4] In a composition, the positive space has the more visual weight while the surrounding space - that is less visually important is seen as the negative space. [5]

In graphic design of printed or displayed materials, where effective communication is the objective, the use of negative space may be crucial. Not only within the typography, but in its placement in relation to the whole. It is the basis of why upper and lower case typography always is more legible than the use of all capital letters. [6] Negative space varies around lower case letters, allowing the human eye to distinguish each word rapidly as one distinctive item, rather than having to parse out what the words are in a string of letters that all present the same overall profile as in all caps. The same judicious use of negative space drives the effectiveness of the entire design. Because of the long history of the use of black ink on white paper, " white space" is the term often used in graphics to identify the same separation.

Considering and improving the balance between negative space and positive space in a composition is considered by many to enhance the design. This basic, but often overlooked, principle of design gives the eye a "place to rest," increasing the appeal of a composition through subtle means.

Negative space in art, also referred to as "air space", is the space around and between objects. Instead of focusing on drawing the actual object, for a negative space drawing, the focus is on what's between the objects. For example, if one is drawing a plant, they would draw the space in-between the leaves, not the actual leaves. This technique requires one to forget about a conceptual meaning of an object and forces them to observe through shapes, rather than drawing what they may think an object looks like.

Negative space is used with figure-ground ambigrams and tessellations to display words or pictures in different directions after symmetry. [9] [10]