The National Museum of Saudi Arabia is a major national museum in Riyadh, Saudi Arabia. Established in 1999, [2] [3] [4] it is part of the King Abdulaziz Historical Centre in Riyadh. 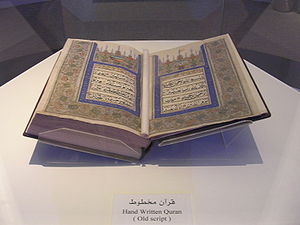 The National Museum was part of the "Murabba' Development Plan" to refurbish the area of and around the old Murabba' Palace district for the Centennial Celebrations in Saudi Arabia. Thus the deadline was set to early 1999, leaving only 26 months [5] for the planning and building of the museum from scratch, although ideas for such a museum had been discussed since the eighties. For the design the lead architect Raymond Moriyama was inspired by the form and colors of the sand dunes of the "Red Sands" just outside Riyadh. [6] The west facade along Murabba' Square resembles the soft contour of a sandune with its layout forming a crescent pointing towards Mecca. [5] The west facade opens into an Islamic history of the Arabian Peninsula. For the final galleries the visitor enters the "Unification Drum" which has displays about the current Saudi State. The last gallery illustrates the two holy mosques and the hajj. Additionally there are two further galleries for special exhibitions.

The concept for the didactic design of the exhibitions is somewhat different from the traditional approach of the classic museums. There is less emphasis on individual exhibits displayed out of their cultural context as objects of great value. There are a great many replicas and life size dioramic displays, illustrating and educating about certain points and issues. As such it is sometimes difficult to identify certain specific pieces and even tell replicas from originals. The idea behind this is not to focus on individual pieces in their own right but rather use them as examples to highlight the general ideas or concepts they represent. [6]

There are eight halls in the museum:[ citation needed]

In June 2018, President of the Saudi Commission for Tourism and National Heritage Prince Sultan bin Salman Al Saud announced the expansion of the museum in the next two months. New services in the museum for the visitors shall be installed, including:

In January 2021, a new museum director, Laila Alfaddagh, was appointed, who is expected to lead the museum into a new phase of engagement with audiences. [10]

The exhibits are organized in eight "Exhibition Halls" or "Galleries". [11]

The first exhibit encountered in the museum is a large fragment of a meteorite found at the Wabar craters in the desert of the Rub' al Khali. Further exhibits and interactive displays explain the solar system, plate tectonics, the geology and geography of the Arabian Peninsula and the development of the fauna and flora of Arabia. Large exhibits include the skeleton of a Platybelodon and Ichthyosaur. The gallery concludes with stone age man.

This gallery illustrates the early kingdoms, focusing on Dilmon, Madian, Gariah and Tima'a. The exhibition continues with the intermediary Arab kingdoms by showcasing the cities of Al-Hamra, Dawmat Al-Jandal, Tima'a and Tarout. The late Arab kingdoms are represented by the civilizations that thrived in Al-Aflaaj, Najran and Ain Zubaida.

This gallery is dedicated to the time from about 400 BCE until the dawn of Islam. Cities of this time portrayed are Makkah, Jarash, Yathrib, Khaibar, Najran, Khadrama, and Dawmat Aljandal, as well as the markets at Okaz, the al-Majaz, Najran and Habasha. The evolution of script and calligraphy is displayed and explained with many examples. [12]

Here the life and mission of Mohammad is illustrated. On one wall there is a large family tree explaining Muhammad's family and relations in great detail. From this gallery the visitor has to use a bridge which connects to the next gallery performing a symbolic cross-over from the time of ignorance to the time after the revelation of Islam to Muhammad.

The time covered in this gallery include the Islamic beginnings in Medinah and the history of the rise and fall of the Caliphate. It also illustrates the time of the Mamluks and the Ottomans up to the First Saudi State.

Shown here is the culture and history of the two early Saudi states. A large model of Diriyah is shown under a glass floor, so that it can be examined in great detail.

This gallery is dedicated to King Abdul Aziz and how he regained Riyadh and established his kingdom.

A major exhibit in this gallery is a large model of Makkah and its surroundings.