The National Museum in Warsaw ( Polish: Muzeum Narodowe w Warszawie), popularly abbreviated as MNW, is a national museum in Warsaw, one of the largest museums in Poland and the largest in the capital. It comprises a rich collection of ancient art ( Egyptian, Greek, Roman), counting about 11,000 pieces, [3] an extensive gallery of Polish painting since the 16th century and a collection of foreign painting ( Italian, French, Flemish, Dutch, German and Russian) including some paintings from Adolf Hitler's private collection, [4] ceded to the Museum by the American authorities in post-war Germany. [5] The museum is also home to numismatic collections, a gallery of applied arts and a department of oriental art, with the largest collection of Chinese art in Poland, comprising some 5,000 objects. [6]

The Museum boasts the Faras Gallery with Europe's largest collection of Nubian Christian art and the Gallery of Medieval Art with artefacts from all regions historically associated with Poland, supplemented by selected works created in other regions of Europe. [7] 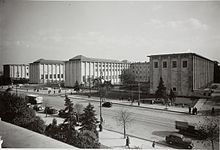 Main facade of the National Museum, 1938

The collection, on Jerusalem Avenue, is housed in a building designed by Tadeusz Tolwiński, developed between 1927 and 1938 (earlier the museum had been located at ulica Podwale 15). In 1932 an exhibition of decorative art opened in the two earlier erected wings of the building. [3] The new building was inaugurated on 18 June 1938. The purpose-built modernistic edifice, was situated on the edge of Na Książęcem Park established between 1776–79 for Prince Kazimierz Poniatowski. [7] From 1935 the museum director was Stanisław Lorentz, who directed an effort to save the most valuable works of art during World War II. [7]

During the invasion of Poland the building was damaged and after the Siege of Warsaw the collection was looted by the Gestapo led by Nazi historian Dagobert Frey, who had already prepared a meticulous list of the most valuable artwork on official visits from Germany in 1937. [9] The Gestapo headquarters presented Rembrandt's portrait of Maerten Soolmans as a gift to Hans Frank in occupied Kraków and packed everything else to be shipped to Berlin. [10] After the war the Polish Government, under the supervision of Professor Lorentz, retrieved many of the works seized by the Germans. [11] More than 5,000 artifacts are still missing. [12]

Many works of art of, at that time unknown or of uncertain provenance [11] (e.g. originating from Nazi German art repositories in Polish Recovered Territories in Kamenz, Karthaus, Liebenthal and Rohnstock among others) were nationalized by the communist authorities [13] using subsequent decrees and acts [14] from 1945, 1946 and 1958 and were included in the museum collection as so-called abandoned property. [15] At present, the collection of the National Museum in Warsaw includes over 780,000 items displayed in many permanent galleries, including the Professor Kazimierz Michałowski Faras Gallery and galleries given over to ancient art, medieval art, painting, goldsmithing, decorative art and oriental art, as well as many temporary exhibitions.

In 2008-2013 the "Polish Archaeological Mission " Tyritake" of National Museum in Warsaw" conducted works at Tyritake, Crimea. In 2016 the "Polish Archaeological Mission "Olbia" commenced works at Olbia (archaeological site), Ukraine. Both are headed by Alfred Twardecki curator of the Ancient Art Gallery. In 2010 the National Museum, as one of the first state institutions in the world, held an exhibition entirely dedicated to homoerotic art - Ars Homo Erotica. [16] Since the 2011–12 renovation, the museum is also considered one of the most modern in Europe with a computer-led LED lighting allowing to enhance unique qualities of every painting and exhibit. [17]

In 1945 the National Museum took over the historic Nieborów Palace in the village of the same name and made them its subsidiaries. In the early perioid, the deputy curator there was the writer Mieczysław Smolarski. 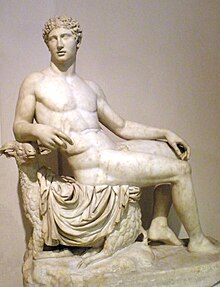 Hermes Sitting on a Ram, 2nd century BC

In 2012 the permanent galleries underwent revolutionary changes. [18] The curators of the museum re-arranged it and supplemented it with new works from the museum's warehouses. [18] Paintings were not hung chronologically, but thematically: genre painting, still lifes, landscapes, cityscapes, biblical, mythological, nudes. [18] Works by Italian, Flemish, Dutch, German and Polish artists were hung together, making it easy to observe and compare similarities and differences. [18] The Gallery of Ancient Art, Faras Gallery, Gallery of Medieval Art, Gallery of Old Masters, Gallery of 19th-century Art and the Gallery of 20th and 21st-century, includes the works of Polish painters and sculptors and are displayed in the context of art in other countries and in different epochs. [18] The galleries reflect the richness and diversity of traditions and historical experiences of individual nations, which, however, built their cultural identity on the same foundation of Greco-Roman antiquity and the Christian religion. [19]

The Gallery of Medieval Art mainly presents objects from the late Middle Ages (14th-15th century), originating from different regions of today's Poland, as well as several examples of western European art. [20] These works were originally designed almost exclusively for churches. [20] The exhibition was designed to allow the audience to understand the role of art in the religious life of the Middle Ages. [20]

The gallery presents trans-regional phenomena from the 12th–14th centuries, such as the distinction of figurative sculpture from architecture in the Romanesque era, Central European sculpture from the circle of the Madonnas on the Lion, and so-called International Gothic, also referred to as a courtly style. [20] Many of the works included in the exhibition underline a distinct character of Central European regions such as Silesia between 1440 and 1520 (with large quartered polyptychs, epitaphs, votive and didactic plaques, and Ways of the Cross), Lesser Poland, Greater Poland and Kuyavia between 1440 and 1520 (with altarpieces and devotional paintings) and Gdańsk and the Hanseatic region between 1420 and 1520 (with large altars from Hamburg and Pomerania). [20] 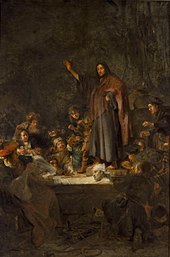 The new techniques implemented in the gallery allow the unabridged presentation of large polyptychs, such as the famous Grudziądz Polyptych, including the reverse of the wings. [20] The new arrangement of the exhibition was designed by WWAA. [20]

The Gallery of Old Masters on the second floor was conceived from the former Gallery of Decorative Art, Gallery of Old European Painting and the Gallery of Old Polish and European Portrait in 2016. [21] It combines species of pictorial art - painting, sculpture, drawings and prints with crafts in reference to the very notion of " art" which originally meant craftsmanship. [21] Painting and sculpture with its representational character and imitation of reality ( mimesis) was united with decorative arts in common goals and functions as well as in spaces where they were collected and exhibited. [21] These "social spaces" have provided the key to the division of the gallery: 1. palace, villa, court; 2. church, chapel and domestic altar; 3. the city. In other words: 1. court culture; 2. religious culture; 3. city culture. [21]

In the redesigned gallery, the works are presented not according to national schools, but as a confrontation of artistic circles of the South and North. [22] The new system reflects the hierarchy of the genres created by Renaissance art theory and the former function of the paintings. [22] The aim of this exhibition is to show, for what purpose and for which recipients, works of art were created. [22]

The gallery shows a variety of effigies, reflecting the multiplicity of social, political and private functions of portraiture. [23] The exhibition opens with monumental images of courtly and aristocratic portraits and busts compiled with some examples of traditional Polish and Western European portraits en pied and followed with smaller, less formal, or private portraits, coffin portraits and 18th-century portraits followed with miniature portraits and paintings of Stanislaus Augustus' era on the first floor. [23]

The core of the new exhibition of the Gallery of 19th-century Art, presenting the main trends shaping the art in the nineteenth century, is the work of Polish painters and sculptors, which is present in the context of selected works by representatives of other nationalities. [19] Confrontation of works by artists from different European countries shows their artistic aspirations, universal ideas or symbols, similar experiments carried out independently or in workshop practice. [19] One of Poland's largest canvas paintings, the Battle of Grunwald by Jan Matejko (426 cm × 987 cm (168 in × 389 in)), is displayed in the Gallery of 19th-century Art. [7]

Collections of modern and contemporary art are among the largest in Poland. [24] Paintings, sculptures, prints and drawings from the 1920s and 1930s, Polish avant-garde film, photographs, photomontages, along with selected works of the 1980s independent culture, video and performance of the last forty years are exhibited in a 700 m2 gallery. [24] Information about the selected objects is available through mobile applications and selected works are visualized and described by the gallery curator thanks to augmented reality. [24]

Collections of the National Museum in Warsaw comprise about 830,000 exhibits of Polish and foreign art, from antiquity to the present, and include paintings, sculptures, drawings, engravings, photographs and coins as well as objects of applied art and design. [25]

The origins of the Old European Painting Collection, comprising 3,700 paintings, dates back to 1862 and the establishment of the Museum of Fine Arts, when 36 Italian, Dutch and German paintings from Johann Peter Weyer collection in Cologne were acquired. [27] The Museum came into possession of the works of such masters as Pinturicchio, Cornelis van Haarlem and Jacob Jordaens. [27] The collection was enlarged through purchases, donations and deposits. [27] The most significant acquisition was the collection of paintings of Pietro Fiorentini, donated in 1858 to the School of Fine Arts in Warsaw, and given to the Museum in 1879. [27] The collection was further expanded through the purchase of paintings from the collection of Wojciech Kolasiński in the years 1877–1896 and bequests by Cyprian Lachnicki in 1906 including Flagellation of Christ by Pieter de Kempeneer, Portrait of a man in a yellow jerkin by Hans Schäufelein, Expulsion from Paradise by Pier Francesco Mola and Academic study by Jean Auguste Dominique Ingres. [27]

In 1935 the Museum purchased a large collection of Jan Popławski, including Portrait of Admiral by Tintoretto, [27] and in 1961 a collection of Gabriela Zapolska, including several paintings by Paul Sérusier. The collection of Polish modern art gained a more international context with the purchase of Portrait of Tadeusz Makowski by Marcel Gromaire in 1959 [28] and Lassitude by an Art Deco painter Tamara de Lempicka in 1979, [29] both on permanent display. The museum also features the works of other major European artists such as Rembrandt, Sandro Botticelli, Lucas Cranach the Elder, Auguste Renoir, Gustave Courbet, Angelica Kauffmann, Luca Giordano, Mattia Preti, Joos van Cleve, Jan Brueghel the Elder, David Teniers the Younger and Gaspare Traversi.

On the top floor a large gallery displays Polish history paintings of the 19th century, many of which are well-known to Poles, and vividly depict a nationalist take on incidents from the nation's history.